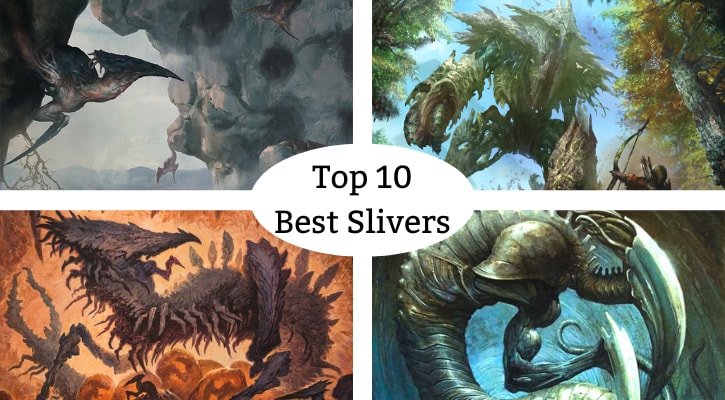 In this article, we’ll explore yet another creature type associated with synergistic tribal design. It’s time to take a look at the best Slivers from Magic the Gathering.

Slivers are pretty much the best example of an excellent tribal creature type. The whole design and lore behind these creatures resembles a hive. This means that they all have the sole purpose to belong in a tribal deck. Slivers is the only tribe in the game which isn’t meant to be played in any other deck shell. This deliberate card design makes them one of the most overwhelming and powerful tribes in the entire game.

Because of its tribal nature, Slivers decks work best in eternal formats such as Modern or Commander. So I made this list with those formats in mind.

Slivers just want to be on the battlefield with others of the same type. Therefore, there are many creatures which are good enough. In order to get to the top 10 list, some Slivers had to be cut.

Let’s first take a look at those Sliver cards who didn’t quite make it.

These three cards are incredibly good, but were left out of the main list because they aren’t Slivers.

Reflections of Littjara is pretty much good in every tribal deck, especially in this one. It creates a token of any spell of the chosen creature type, which is crazy good.

Realmwalker is also incredibly good in any tribal deck because it allows you to cast creatures from the top of your library, which makes establishing a board presence way easier.

Finally, Sliver Hive is a perfect land for the deck, giving you both mana fixing, and Sliver tokens, which won’t be just 1/1 when you have other Slivers in play.

One of the most common ways a Sliver card is designed is by assigning a color to it and then giving them a keyword ability of that color. Then, because Slivers work like a hive, that Sliver gives all other Slivers the same ability.

Here are some of the best Slivers with simple but powerful keyword abilities:

Now, here are more Slivers, but with a bit more complex abilities. These creatures have abilities that are not as straightforward as the previous ones, and in this way they provide a bit more flavor and power to the overall deck.

So, with the long honorable mentions out of the way, let’s start with the top 10 best Slivers.

These two first slivers are part of the most underappreciated category of creatures in the game. That is mana dorks, or creatures that produce mana in one way or another. Newer players might look at them and think, “Ah you know, I guess they’re okay…”

When in reality, mana dorks are incredibly useful in almost every deck. What sets these two apart from the typical mana dork is their ability to share their ability in the classic Sliver way. The fact that they can make all Slivers produce mana makes them even more powerful than simple mana dorks.

This card also has an ability that players often overlook – cycling. This is a really useful ability to have in a card because it allows you to get rid of unwanted cards from your hand and at the same time provide you with a replacement for the cost of 3 mana.

This card is a little different in the way in which it lets you cycle, but instead of drawing a card, you can just search for any Sliver you want. And of course, it gives this same ability to every other Sliver you have. So it not only helps you get rid of cards you don’t need, you can actually get the perfect Sliver you need.

Another similar card is Hollowhead Sliver also provides card selection for your deck. This card has a tap ability, which allows you to discard and draw a card when you tap it. Of course, it also gives this same ability to every other Sliver you control.

This allows for multiple ways of getting card draw, as well as dumping useless cards at any given moment. The fact that it needs to tap is somewhat unfortunate, but with the combination of other Slivers that might give all creatures vigilance, this ability is pretty good.

This is, once again, another similar card to the past ones but with improved abilities. It is similar to Homing Sliver in the fact that it tutors for a Sliver card by paying 3, but this card does not need to cycle in order to do so. This means that you don’t have to lose any card in order for you to tutor for a Sliver. You can also activate it plenty of times, since you don’t need to tap it.

Finally, it also allows you to pay 3 and gain control of a target Sliver. This means if one of your Slivers gets stolen or an opponent also has a creature of this type, you’ll be able to gain control of it.

This card has another great support ability in the form of artifact and enchantment removal. It does not only have the ability itself, but in Sliver fashion it provides it to all other Slivers you control.

This makes your whole Sliver army incredibly effective against problematic artifacts and enchantments. This is just another powerful weapon in your Sliver arsenal, which will assure you have dominance over the game.

Stepping away from card draw abilities, Quick Sliver brings flash to the table. Its ability is as simple as it sounds. It has flash, and it gives all other Slivers flash. Why is this better than card draw?

Well, it provides you with the element of surprise. It also allows you to be more productive with the usage of your resources, as you’re now able to play Slivers at any time and in response to anything.

Coming after Quick Sliver, Lavabelly Sliver works nicely with the previous card. It has a fascinating enter the battlefield effect. It deals one damage to a target player or planeswalker, and it gives this same ability to all other Slivers you control.

This slowly takes away life points from your opponents, while getting them to you. With lots of Slivers being played, this card is devastating. It also has incredible combo potential, which makes this card a great addition to any Sliver deck.

Slivers as a tribe is known for its explosiveness and board presence. Win conditions are usually combo pieces, value, or damage based. What better way of doing the latter than by attacking. And if you want to attack efficiently, this card provides one of the best abilities for aggressive playstyles.

This can possibly be one of the best finishers in a Sliver deck. When it comes into play, it basically makes it almost impossible to deal with any of your Slivers. If you choose the right color to give protection from, you are able to neutralize almost all threats you might have.

If you are playing in a 1v1 scenario it’s often game over, if you play in a multiplayer format it guarantees you an incredible advantage against most opponents. In general, color protection as an ability itself is incredibly broken, and giving it to all creatures you control is very strong.

One of the few cards in the list which can fill the role of Commander perfectly, and can pretty much bring the end of the game itself, Sliver Legion is the perfect card to represent the idea behind Slivers.

The whole theme behind the tribe is that of a hive, which share their abilities with all. It is an entire unit of creatures which alone are powerful, but put together are almost invincible. This creature provides one of the most impactful abilities.

It gives +1/+1 to all Slivers equal to the amount of Slivers you control, which is insane. Legion instantly makes your whole board a lot bigger and a lot scarier when it comes into play. Highly impactful card.

So, now that we have all the Top 10 best Slivers established, let’s talk about three important cards that were not included. These following creatures are not a part of the main list because they deserve to be talked about separately.

These three cards are arguably the top three best Slivers in the whole game, but what makes them even better is that they are Legendaries, which means they can be played as Commanders.

Now, I know I said the card in the list could be played in any format, but I have a soft spot for Commander. That’s why I decided to make a different section to talk about the cards that would be best to build around in this tribe.

So let’s start with the least popular one:

This creature provides access to all colors in the game, which is essential in any Sliver tribal deck. It is also relatively easy and cheap to find (which is not true for the other two cards). The most important aspect is its ability to give all Sliver creatures you control indestructible. This is, obviously, a really powerful ability. Plus, there are also a ton of versions of tribal decks using this card which are budget friendly, which is not the case with many Sliver decks.

Now let’s talk about the most famous or maybe infamous Sliver card out there:

This card is known for being the first fantastic Sliver Commander. It is also known for its insane rarity and price, which is a result of the Reserved List. Its abilities, on the other hand, have become somewhat outdated but are still excellent in general.

Once again, it is a creature that provides all colors in the game. It also has good stats, better compared to Sliver Hivelord, being a 7/7 for 5 mana. Lastly, its ability to pay 2 mana and create a Sliver token is also good to increase board presence and power level.

Lastly, we have, arguably, the best Sliver:

This creature is also one of the newest Slivers on the list. Funny enough, it is the oldest in the Lore, and therefore one of the most powerful. It has the really fun and explosive mechanic cascade. In typical Sliver fashion, it gives this same ability to every other Sliver you control.

So, this makes for a powerful and fun commander to play with. It also has the same stats as Sliver Queen being a 7/7 for 5 mana. In some ways, it is actually an improved and cheaper version of the classic card.

In conclusion, Slivers are one of the most popular tribal creature types in the whole game. They are one of the best representations of how game mechanics can compliment an idea or theme.

They are also one of the oldest and most bizzare creature types because of their lore, art, and abilities. Their characteristic mechanic of sharing abilities between all creatures is great, and it shows cohesion.

In general, these creatures are the most fun to build around because of all the options available. I hope this list has given you an idea of some of the cards that can be included in a Sliver tribal deck.

As always, this list is based on my opinion, so if you agree, disagree or have any comments about my additions, feel free to let me know in the comment section.

Have fun, stay safe, and go for wins with your Slivers!