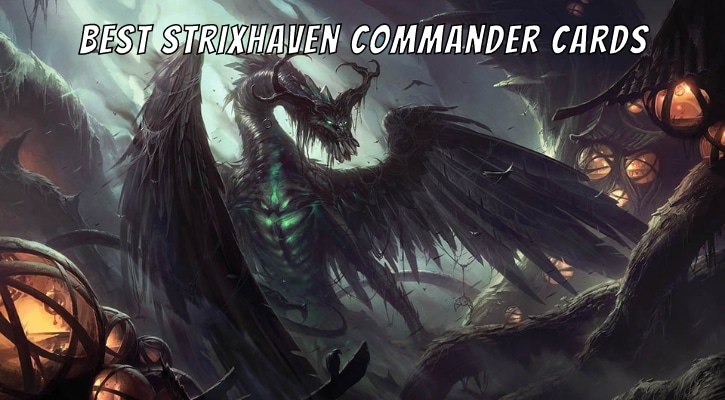 In today’s article, I’ll talk about the best Strixhaven Commander cards, which you can use to either upgrade your current Commander decks with, or to build a brand-new deck around them.

So let’s get started! Class is officially in session.

Best Strixhaven Commander Cards for the 99

First up, let’s look at the cards that can’t go in the Command Zone. These cards tend to have general utility in multiple decks and at multiple power levels. They are often flexible with different applications in different decks. Sometimes they are novel effects that haven’t been seen before. Whatever the reason, these cards will see a lot of Commander play.

First up, we have a card with an effect that I’m surprised to find out we don’t already have in Magic. There have been plenty of cards that let you draw a card when you cast a creature, enchantment, or artifact. However, there was never something as clean and simple as “Whenever you cast or copy an instant or sorcery spell, draw a card.”

Often times, storm decks that want to cast as many spells as possible in one turn struggle to find enough card draw to feed their combo. Archmage Emeritus is one card that can ensure they don’t fizzle.

This card makes it to the list simply because it is the first card to do what it does as effectively.

If you buy a Strixhaven bundle, you can get Archmage Emeritus as the Bundle promo.

I like to call this card Birgi Jr. It makes mana, just like Birgi, God of Storytelling, but it does cost an extra mana to cast. The treasures can stick around for multiple turns, but you only make them when you play Instants and Sorceries. There are pros and cons of playing each, but the Artist is definitely powerful enough to be in the conversation.

Storm-Kiln Artist‘s name should be enough to tell you exactly what you should be doing with it. Cast as many spells as you can. We’ll probably see this play pattern relatively frequently in the next little while.

Even if this card wasn’t as powerful as it is, its name is so perfect, it might’ve landed a spot on this list anyhow. Culling Ritual wipes all the small permanents off the board, as well as giving you mana to rebuild or just ramp into something huge. This is so valuable to have on a board wipe, as it allows you to be the first to rebuild after everything goes to the graveyard.

One similarity that you might find among all of the cards on this list is that the cards in the 99 are powerful in both casual and competitive metas. Not to say that these are competitive staples. However, the ability that Storm-Kiln Artist has to incidentally generate mana for you and Archmage Emeritus to incidentally draw you cards could potentially help them see play in the highest-powered metas if a deck can overcome their high casting costs.

Culling Ritual is positioned similarly, since cEDH decks want to play so many low-mana-value spells so early on in the game. This could easily make ten mana for a player to set the others back for a turn or two while the caster ramps into a terrifying threat.

This quirky-looking character turned out to be quite a bit more powerful than many people were thinking when they saw it spoiled. This card plays similarly to Rhystic Study in that you get card advantage if your opponent doesn’t pay the tax. This gives you an advantage in counter wars. It also lets you get a little bit of value if your opponents remove your stuff.

Even though the group-hug effect on the backside is almost never the side you play, there is still a lot of political influence this card can have. You can team up with or against your opponents, making deals and influencing their actions.

This card isn’t very flashy, but it has a lot of important interactions in Commander. First, an unconditional removal spell for creatures or planeswalkers that has the option of being two mana is powerful. You don’t often want to give your opponents a card, but it’s better than losing the game if the creature or planeswalker really needs to go.

On top of that, in cEDH or other pods where Thassa’s Oracle is common, this is excellent tech for stopping that combo. Since Oracle is the new Lab Man, you could probably include a Baleful Mastery in your deck and expect to steal a couple wins this way.

Despite the simplicity of this card, I think it is the best card from Strixhaven for the 99 of Commander decks.

Now, for this section, I have a slightly different opinion than what I’m going to write. The top 5 commanders that you see in the following list are what I expect to be the most popular commanders in the set over time.

[insert obligatory five-color inclusion here]. Codie is a fairly interesting commander, but I expect that this card will mostly be popular because of its access to all the colors. Competitive parts of the format are already using him with the new MH2 card Profane Tutor to get Ad Nauseum or whatever their win condition is going to be.

The Commander’s Brew podcast also made an interesting Codie deck. It tries to cycle as many creatures as possible into the graveyard so that when they cast a 1-drop with mana made from Codie’s ability, they would always wheel into Living End and could reanimate all of those creatures. This is another really cool way to build this commander.

Along with this, Codie could just be a great spellslinger commander. If you build your deck such that the drawback on Codie doesn’t really apply to you, Codie could be an amazing engine that generates tons of value. For all these reasons and more, Codie gets my vote as the #5 best commander from Strixhaven.

It seems like just about every set nowadays gets a blue/green Legend that generates absurd amounts of value. In Strixhaven, that Legend is Jadzi. She lets you chain instants and sorceries together for as long as you have the mana to pay 1 for each. Not only that, but both sides of her card let you ramp, which is vital to such a big mana value deck.

Jadzi is one of those cards that is so generic that maybe she isn’t even interesting to players. On the other hand, she is new and has potential to be incredibly powerful. Either way, she is a Simic commander, and that alone is almost enough to land her a spot on this list.

Next up is a commander who is unique to Magic in a couple of different ways. First, he is one of a very small number of non-Tribal aristocrats commanders. Edgar Markov Vampires and Trinn, Champion of Freedom/Sylvar, Devourer of the Free Humans are the most common aristocrats decks in these colors. Extus gives Mardu colors a streamlined path to build a sacrifice-themed deck without adhering to tribal restrictions.

Additionally, Extus is a value commander. This will appeal to a whole other group of Commander players and increase Extus’s popularity. Awaken the Blood Avatar‘s cost reduction ability allows you to cast that side of the card multiple times if you have many or recursive creatures. A board full of those Avatars will finish off a table pretty quickly.

Similarly, building a spellslinging Mardu deck with Extus allows you to get a lot of value off of creatures like Fleshbag Murauder or Shriekmaw. The ability to get these and other creatures back from the graveyard will overwhelm your opponents over time.

Last thing about Extus. He is one of the better options in the set to take advantage of the Magecraft ability. If someone wants to build around that new mechanic specifically, Extus is a great option for them.

The Elder Dragon that Witherbloom college is named after bears some significant similarities to one of the most powerful equipments in Commander. Of course, Sword of Feast and Famine is the equipment I’m referring to. Beledros lets you untap your lands, just like the sword, but at a pretty heavy cost. If you can take advantage of the life loss, though, you have a very powerful deck.

These are exactly the reasons I expect Beledros Witherbloom to be one of the top commanders from Strixhaven. Her ability is the perfect blend of powerful and novel, which is a recipe for a popular commander.

Hofri gets points in this set for being both an awesome commander and a red/white card. So many sets give us Boros (ahem, I mean Lorehold) commanders that can’t inspire Commander players. Hofri is no such commander. He allows you to get double value from your creatures after they die. This ability feels more like a blue/green ability, in the sense that it makes each of your creatures worth so much more than what is actually printed on the cards.

Obviously, this commander is only as good as the enters/leaves the battlefield triggers that you get to double up on in red/white. Fortunately, these abilities are abundant. To name just a few, there are:

I could go on. This commander opens the door for a new kind of red/white deck that uses a play pattern that Commander players love. Of all the Strixhaven commanders in this whole set, Hofri, Ghostforge is by far the best one.

Saved By The Bell

As paper Magic comes back to life and game stores open back up, these are the cards you will probably play against from Strixhaven. Let me know if there are cards that I missed. You can leave a comment here on this article, or find me on Twitter or Instagram. You can also listen to my podcast, Gathering: My Thoughts on Apple Podcasts and Spodify.

See you with the next set soon!