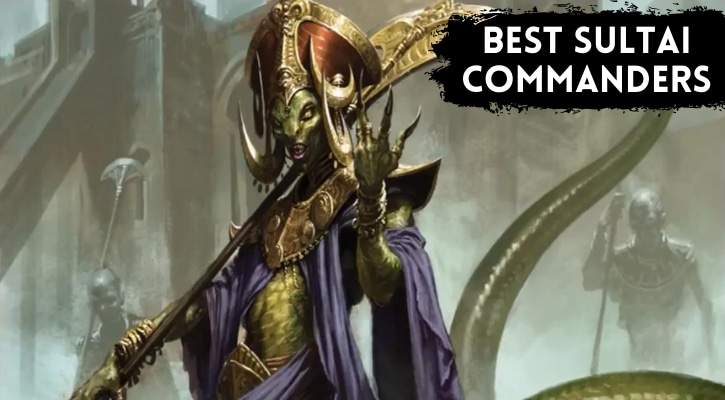 And we are back, after some time, with another article about a three color combination in the game of Magic. These types of cards are always fun. You get to see the three different showcase their own abilities. Comparing the three is super fun and interesting. You get to see how the different combinations have themes in common. But end up with their own unique style.

This time we will be taking a look at the best Sultai Commanders. Sultai is the combination of blue, green, and black. Their identity revolves around using green and blue to gain knowledge (ramp, card draw) and using black to take advantage no matter at what cost (sacrifice, graveyard recursion, mill, etc.). These three colors with their abilities make up a powerful and dominant identity.

Commanders with these three colors use this identity. Of course, there are some variations. And cards that are designed with abilities out of the ordinary. The main themes associated with the Commanders in Sultai are:

A usual “theme” that can also be considered is the use of “Birthing Pod” as the main building anchor and card of the deck. And there is also the inclusion of the recent “Mutate” mechanic.

In general, Sultai is fun to build around, as it offers a lot of different strategies. Especially if you like playing around with your graveyard due to it being a main part of a lot of Sultai Commanders.

So, with that said, let’s start with some honorable mentions.

The first three Commanders I’ll talk about are based around counters. Each with different types of counters. And each using them differently.

Cazur and Ukkima are partner Commanders. Cazur gives a +1/+1 to any creature that you control that deals combat damage. And Ukkima uses this to attack. Ukkima has the ability to be unblockable which makes it a great attacker. And its second ability makes it deal damage and make you gain life equal to its power.

Vorosh was included because I have a soft spot for all of the three color dragons that came out with him. They all have the same base ability of dealing damage to a player, paying 3 mana and triggering the ability. In Vorosh’s case, he gains 6 +1+1 counters. Nothing special, but it could be a fun voltron build.

Rayami, First of the Fallen

Rayami is a weird card, that’s certainly true. It exiles nontoken creatures, when they would die, so it shuts off various die-triggers. Furthermore, they get blood counters on them, which gives Rayami their evergreen keyword abilities. You can certainly make a powerful creature out of it.

These three Commanders are totally different from any other. And they do not stick to the classic identity of Sultai.

Jorn is really powerful in its own shell. He cares solely about snow permanents. Whenever he attacks, he untaps each snow permanent you control. This means he even untaps lands if they are snow lands. Which is crazy good.

Now, on the other side, Kaldrig is a good alternative play if there is a snow permanent that has been placed in the graveyard. You can play it and immediately bring something back. Tapped, but back from the graveyard. Although this is a good ability to have, you most likely will be playing Jorn only.

Archelos is a really cool and flavourful card. Its flavor text described this card perfectly. It is a really controlish outlet. If it is tapped, all permanents enter tapped. And if it’s untapped, all permanents enter the battlefield untapped. With this ability, you basically have control over the pace of the game. The only thing that is necessary on the deck is ways of controlling when Archelos is tapped without having to attack. Super fun card to brew.

Brokkos in a few words is a big mutate creature with trample. It’s super efficient. It is a 6/6 for 5 with trample. Its mutate cost is the same as its normal cost. This means that you play it by itself or on top of another creature, which is pretty good. And versatile.

Plus, you can also cast it for its mutate cost directly from the graveyard. So it is super hard to get rid of. Fantastic card. Now, would it make a good Commander? That is debatable. It is best suited as part of the 99, in my opinion.

That was it for the honorable mentions, and now it’s time for the actual top 10 list of best Sultai Commanders.

Volrath is a really open-ended Commander to build around. The first ability provides a control aspect. It can deal with certain creatures, as well as mark the target for its second ability. Its second ability is what is most interesting.

The cost is really low. Only a single mana. And it makes Volrath become a copy of the target creature with a counter on it. This means any counter. It can become a copy of a creature which you have marked with its first ability. It can also copy any other creature your opponents, or you control with a counter. This gives the opportunity to build it in any of these directions. Really cool.

Damia is one of the most efficient card draw and ramp cards out there. Having a full hand every beginning of your turn is great. And hitting your land drops because of this is even better. Yes its cost is quite elevated but once you have managed to get her on the board it is game over. Well, maybe not quite, but you know what I mean.

Most decks around her are based around getting most of your lands out of your hand. Due to the fact that she provides so much card draw. And the killing blow is always with a combo or with some way of using all these lands you can get from her card draw. Really efficient.

This is one of my personal favorite cards. Amongst my old Commander group, this card was one of the most feared. Its ability to combine two cards into one without previous notice was incredible. The main purpose and theme of the deck is mill. That is self mill as well as for your opponents. The more creatures there are in graveyards, the better. And the more and more crazy combinations you can create.

You can choose a creature with a great ability as well as another with great toughness and power. So you can basically choose for it to become a super powerful creature. Brings back fun memories. Lots of losses and frustrations. Amazing Commander to play with and horrible to play against.

This is probably the best mutate card from the Ikoria set. It’s a great creature to attack with. It has good stats. 6/6 for 6 with trample. Plus, the mutate cost is cheaper than its normal cost. And if you mutate it into another creature, it can attack immediately after casting it.

Dealing damage is not that hard with Otrimi. And when it deals damage to a player, you can return a card with mutate to your hand. Pretty good to fill up your hand with cards to play later. Mutate is at the center of this card, so you can have fun with different combinations.

This is the mill side of Sultai, which is probably one of the best Commanders to embrace this strategy. It generates self-mill whenever she enters the battlefield or attacks. It is not a regular one card mill, instead you get to mill three cards, which is a substantial amount.

Furthermore, it also triggers her second ability, which creates 2/2 Zombies whenever one or more cards are put into your graveyard. This ability also triggers whenever you mill other cards. This in a well-built Sultai deck is deadly. She is great at milling. Not to mention, she also has good stats. 3/3 for 4 is nice. Great card overall.

Another Naga on the list. This type of creature is directly linked to Sultai. They are the best way to describe this colour identity. Reptiles linked to blue and green, with the power to use it to their benefit represented in black. When it comes to stats, Kadena and Sidisi are the same. Same cost of 4 for 3/3 power and toughness. Decent. Kadena when it comes to ability is totally different.

She is the only viable Morph Commander. This is a fascinating mechanic. Having creatures on the battlefield which can, at any moment, change to something super powerful is excellent. And the fact that by casting this kind of face-down card generates card draw is even better.

Tasigur is another example of a great self-mill Commander. He is not quite as good as Sidisi when it comes to generating self-mill. But he is better at making good use of cards that are put into the graveyard.

First, he can be cast using delve. This makes good use of a card in your graveyard that you no longer need, even in the graveyard. This makes him potentially 1 mana to cast. That’s insane for a 4/5.

Second, its ability to mill the top 2 cards of your library and then making an opponent choose one to put on your hand is a good way of playing politics. It also benefits from the first ability, which exiles cards from your graveyard that probably your opponents would choose.

Hydra tribal is definitely a thing with this card. Four mana for a 2/3 creature that can tap for 2 mana is really efficient. Plus this creature also has deathtouch which is just the cherry on top. Then the fun begins on its second ability. Basically whenever you cast a hydra or an X-spell you generate a Hydra token with counters equal to the mana cast to play that x spell. So you get two same Hydras for the price of one.

Or you play a big sorcery or instant spell and at the same time generate a token. This could not be more efficient. The best part is that it can itself help to cast this X spell that you’ll play.

This is the best “value” Commander in the whole game. Value is literally its main ability and theme. Enter the battlefield effects are its bread and butter.  It basically makes all enter the battlefield effects trigger two times. Which is very nice, even better is the fact that you can add blink or bounce effects on the deck. This would make Yarok’s ability work incredibly.

Yarok’s ability has incredible potential to be abused, which is fantastic. And as a cherry on top, Yarok is a 3/5 for 5 with deathtouch and lifelink.

Muldrotha makes the graveyard an extension of your hand. You not only can play cards from your hand but also from your graveyard. She does not restrict this ability to only one card from your graveyard, but multiple permanents with different card types, as well as lands. She is just full of value. And she is the best out there.

In conclusion, Sultai is an excellent color combination for specific themes and strategies. Anything dealing with the graveyard or generating value is exceptional in Sultai. It has one of the best Commanders in the whole game. And it has some of the best cards in it.

As always, please let us know in the comments about cards we might’ve missed, as well as general opinions on the list. I know this one is a bit wild, but let me know your opinions.

If you’re looking for more Commander articles, you can read some of the following ones:

Have fun, stay safe, and go for wins with your Sultai deck!