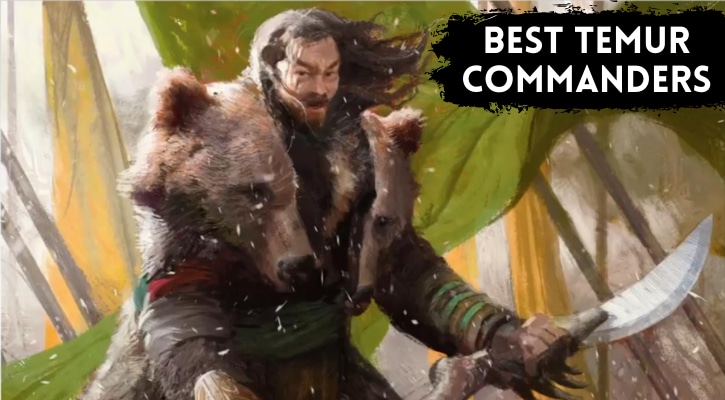 Another week and another list of the best 3-color commanders. This time around, it’s all about the best Temur commanders. Temur is one of the least recognized tri-color combinations’ names in the game, but it certainly offers a lot of interesting options.

The name “Temur” originates from the Khans of Tarkir block. This block was about a plane where Dragons and Humans are the ruling creature types. There are also prominent creature types such as Nagas in the set, but Humans and Dragons are the two main ones. The set featured five different groups which followed and used certain colors, and this is where the names come from.

Temur is a group of creatures that live in the Temur Frontier. Their identity is based on adaptation due to living in inhospitable conditions. The combination of the three colors is really a powerful one. Green provides the desire for harmony, Red provides the desire to explore and go on adventure, and Blue represents wisdom and knowledge.

When it comes to themes and strategies associated with Temur, some of the most common are: spells, lands, and Elemental tribal. This three color combo can provide an explosive combination in value, damage, and ramp. These are probably the best three colors in the game right now.

So, you can argue that this is the best color trio in the game. The name Temur might not be as popular as others, but it is for sure played a lot.

This is also a color combination with not as many legendary creatures, as some other color combos. But that doesn’t mean that the ones that exist are not good. They can are in fact quite amazing.

Let’s get started with some honorable mentions.

Averna can be an excellent companion card to a couple of other Cascade cards. Spoilers, there is one in the upcoming list. She is a fantastic value card.

Her main ability lets you put a land from among exiled-by-cascade cards onto the battlefield. It’s a great way to get some value. However, it’s a better companion card for the 99 than an actual commander.

This is probably the best out of all the “bad dragons”. Intet’s ability is basically a free card for 3 mana that you can basically play at any time. That’s amazing. This is actually not such a bad dragon after all, to be honest. Intetis definitely a fun card to be built around.

This Commander partner duo is the best example of a Temur combination within partner Commanders. They compliment each other perfectly. And they have abilities that represent the most common themes within the colors.

On one side you have the spell base card which is Kraum. This Commander draws you cards whenever an opponent casts their second spell. This is a pretty solid source of card draw. Plus, its stats are excellent. It’s a 4/4 with flying and haste for 5 mana. Not bad.

Then, there is Thrasios, who is pretty much the best partner Commander out there. It’s cheap to cast. It allows you to scry. Furthermore, it is a good way to ramp, and it also draws you more cards. The combination between these two cards will for sure draw you a lot of cards.

Now with the honorable mentions out of the way, let’s get to the main list.

Yasova is a really fun Commander to build around. It is one of the best budget Commanders out there due to it being easily modified. The main ability to take into account is the fact that for  mana you get to steal the best creature from an opponent’s control.

You can use it for many purposes depending on how you build the deck and the engines that you have incorporated. You can of course attack with it as soon as you get control of it. This is a great, aggressive card that allows you to build a deck that way.

The focus on her power also opens up the possibility to pump spells or attachments that can allow for a better result when using her ability. And the best part is that you can use this ability multiple times.

This is one of the best counters to a control deck. This card is all about creatures. It makes counters non-effective against any kind of creature spell. It also gives all other creatures trample. And Surrak can be cast at instant speed due to it having flash. It is a great way to build a board, and it is a great way to be aggressive with creatures.

Just like the previous Dragonclaw, this Commander can be built with a budget in mind. It makes playing creatures accessible. It provides access to three really solid colors to build upon. Green for ramp, blue for card draw and then red for the aggressive creatures.

Mutate comes into the mix with this great Commander. This is one of the best legendary creatures with the mutate ability. Its base stats are mind-blowing. It is a 6/6 for 5 mana with flying and trample.

Plus it has mutate and an ability associated with it. The mutate cost is also really attainable at 6 mana. It lets you exile cards from the top of your library until you get a nonland permanent and put it into the field. It basically assures you a permanent each time you cast Illuna for its mutate cost or if you mutate another on it. This is certainly a really fun mutate build.

Building a cascade deck with this as your Commander is really fun. It basically works as the catalyst for a flow of cascade triggers. It is a really expensive card to cast. So it needs to be worth the wait.

Thankfully, Wanderer delivers as a 7/5 with haste and with a double cascade trigger. Cascade as a trigger works perfectly for this card. Costing 8 mana assures you that the next permanent on the top of the library will be put into the battlefield. Additionally, having the trigger two times is great. Plus, everything gains haste. If you fill your deck with other cascade cards, it will be even better.

#6 Omanth, Locus of the Roil

One of the greatest Elemental creatures in the game. Omnath’s iterations over different sets is always great to see. With each set, it gains a new color and new abilities. In this Temur iteration of the card, it cares about land drops and Elementals.

So the basis and the way to build the deck is a hybrid between Elementals and Land matters strategies. Which basically almost always cross over. Great card for sure.

Riku basically is all about doubling spells and creatures. As the name says, the main theme is doubling whatever you cast. The first ability that he has is to make a copy of an instant or sorcery spell you cast if you pay Izzet. And the second ability is to create a token of a nontoken creature if you pay Simic.

It is a really fun card that really takes advantage of the flavor and lore of the card. It has two abilities. That each ability you need to mana to trigger, and it creates a doubling effect. Really cool design.

Now when it comes to building the deck, spells are always the main priority with creatures falling behind. The creatures that are added to the deck should be there to enhance the first ability, as this is the most powerful of the two.

I am really a sucker for cards that are designed in a really innovative fashion. Partner commanders that can only be paired up with one another are always some of my favorites. This type of design is even better when the two card’s abilities compliment each other. This is true with this pair.

They do not only work great with one another, but they also do so with abilities that reflect their lore and flavour. Haldan is the “shepherd” that can make use of all that Pako brings to him.

Drawing cards is synonymous with Xyris. This card is super powerful. There are plenty of builds in the Competitive Commander scene with this card as its general. Not only is its ability super powerful, but also the cards that can be added into the 99 are insane.

Five mana for a 3/5 with flying is decent. But then the fact that every time that an opponent draws an extra card, you create a 1/1 Snake is great. Also, its second ability to make you and the player you do damage to draw a card is great. This makes you draw a card and generate a token.

This deck is perfect for wheel abilities and combos. It is also great for entering the battlefield effects. No wonder this card is highly used in Competitive Commander.

Casting creatures, especially Elementals, with Animar is great. A creature base Commander at core, Animar benefits from you casting creatures and therefore rewards you by making them cheaper. A three mana for a 1/1 is not that good on paper.

But its abilities make up for it. It has protection from white and black, which are two removal colors. That avoids and prevents it from being removed. The second ability makes it gain a +1/+1 counter whenever you cast a creature, which slowly makes it a threat.

Finally, it also makes all creatures you cast cost 1 less for each +1/+1 counters Animar it has. You can build this deck with counters in mind. Another option are Elementals, which is the most common. Or with pure midrange and aggressive creatures. Animar is versatile and powerful, and certainly one of the best Temur commanders.

Its base stats are pretty good. Four mana for a 4/4. And its ability to make the first spell you cast be doubled if Kalamax is tapped is great. The second ability is also complimentary by giving itself a +1/+1 counter every time you double a spell.

This deck can be built with some tap cards in mind. Doubling effects are a must in this deck. You are for sure assured to generate a bunch of copies of spells during your turn. And whilst your opponents are focused on the spells, you can sneak in with Commander damage due to its second ability.

In conclusion, Temur might not be the most known name, but its colors are for sure known and feared. They are the three most powerful colors in the game right now. They have the three most important abilities in the game. Blue with card draw, green with ramp, and red with damage.

The themes within the Commanders are aggressive, dominant, and hard to deal with. Lands, Elementals, spells, creatures, etc. These colors have it all. They are for sure made to dominate. Although this is the case, the amount of legendary cards that can be used as Commanders with these colors is small. The ones that exist are some of the best in general.

This list is just a reflection of my appreciation and respect I have for these three colors. Although I don’t personally use them that much, I still have fun watching them perform at the highest level.

As always, please let us know in the comments what cards we missed, as well as general opinions on the list. I know this one is a bit wild, but let me know your opinions.

If you’re looking for more Commander articles, you can take a look at the following ones:

Have fun, stay safe, and go for wins with your Temur deck!