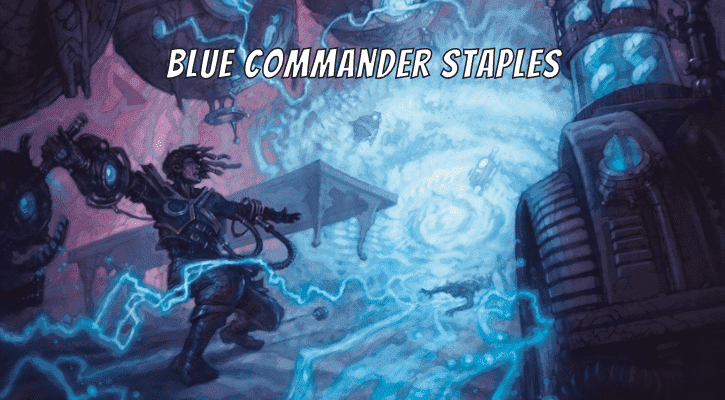 Here’s a quick overview of the best Blue Commander staples. The list is by no means a definitive one, but it includes most of the best Blue cards in my opinion. Each one of these cards has generic utility. This means they show up in a lot of Blue decks.

Blue claims a wide variety of creatures. Most of them provide you with some sort of card advantage. Either they draw you more cards like Consecrated Sphinx, Archmage Emeritus and Mulldrifter, or they pull cards (usually instants or sorceries), from the graveyard like Archaeomancer and Snapcaster Mage.

One of the most common Blue creatures that doesn’t offer card advantage is Laboratory Maniac. This card is an alternative win condition that has won a lot of games of Commander. Thassa’s Oracle is a newer creature that has a very similar effect.

Peregrine Drake is one creature out of a handful that untap lands you control when it enters the battlefield. These kinds of creatures are common because it is fairly easy to make infinite mana with their effects.

Lastly, Clones are a very common type of Blue creature.

Blue instants have been the bane of players’ existence since the very beginning of Magic. The primary reason for this is, of course, counter magic. Not only are there a lot of counterspells in the game, but many of them are very efficient at stopping your opponents’ spells. These are just a few that could be considered staples:

Other than counterspells, Blue has a unique suite of removal. Blue doesn’t typically get to destroy creatures outright, but a few color-pie bends/breaks have allowed it to basically do so. In addition to that, Cyclonic Rift has plagued many Commander pods in its day. These are some of the cards that are Blue spot removal spells:

The last category of Blue instants is card advantage. Blue is easily the best color for drawing cards, and can often do it at instant speed. Here are just a few Blue card draw spells (as well as Mystical Tutor)

Blue’s sorceries serve a similar purpose as its instants (except for counter magic, of course). They draw cards and remove permanents. In addition to that, some Blue sorceries copy creatures, which can be very valuable. Also, Blue sorceries commonly have “wheel” effects. This means they make everyone discard/shuffle their hands, then draw 7ish cards. Blue is the second-best color for that effect, behind Red.

Like the instants and sorceries, Blue’s most common enchantments provide card advantage and removal. Unique Blue effects that show up on enchantments also include Propaganda to keep your opponents at bay, and Omniscience to cast whatever you want for free.

Blue also has quite some good planeswalkers, albeit they aren’t great in every type of deck, so they can hardly be considered staples. The two that are closest to staple status are probably Narset, Parter of Veils and Jace, Wielder of Mysteries.

Narset is absurdly good with wheel effects, thanks to her static ability. Jace is yet another win condition, similar to previously mentioned Thassa’s Oracle.

Going along with the theme for the rest of the card types, Blue lands that do something other than add mana help with card advantage. Castle Vantress and Halimar Depths let you arrange the top of your library in the way that you want. Mystic Sanctuary gets back the instant or sorcery that you need most from your graveyard. Tolaria West can search up another land (in Blue!) or just a 0-mana spell.

If you aren’t the biggest fan of auto-includes in your Commander decks, you can learn how to use fewer staples in my article about problems with Commander Staples.

Furthermore, if you’re looking for a new Commander deck, but don’t want to go through the hassle of building it, you should check this list of all Commander precons. Finally, for a full list of the most commonly played Blue cards in Commander, check out Edhrec’s Top Blue Cards page.