Skip to content
Home → Info Base → When Does The Brother’ War Release on Arena? 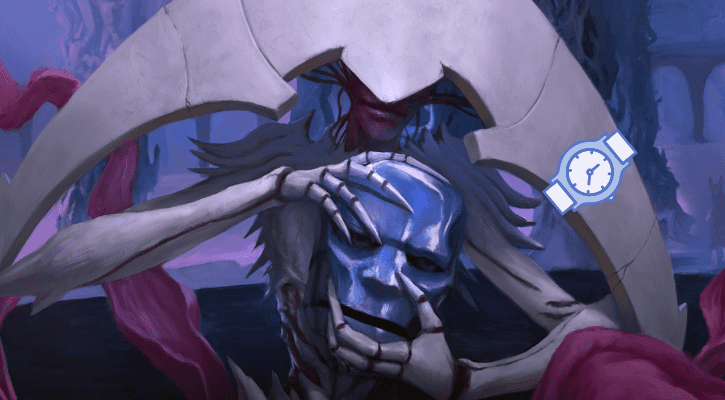 Wondering when does The Brothers’ War release on Arena? Here you’ll find the exact time of Brothers’ War MTGA release, alongside a countdown timer and other useful information about the newest MTG set.

Maintenance starts on Tuesday, November 15th, at 8 a.m. PT (15:00 UTC). Wizards’ Customer Support typically claims that it’s supposed to take around three hours. However, with recent releases, the set was live very quickly after the maintenance began (although with some minor problems).

So, with that information, let’s count down to the official Brothers’ War Arena release:

Additionally, you can also find the Brothers’ War Arena release time in your time zone, in the following table:

Note that this is the official release time. Most of the time, the new set goes live shortly after the maintenance starts. (Albeit with some occasional lag, and bugs.) If you don’t mind that, you can start playing almost three hours before the times noted above. However, that’s not a 100% guaranteed, but still very likely based on the past releases.

If you don’t want to deal with lag and other issues, you can check Wizards Customer Support’s Twitter for more info before you start playing. They will tweet when the maintenance starts, and once it is finished.

Furthermore, they also post updates about any potential delays and problems that might affect the gameplay. This way, you’ll know when you can start playing without encountering issues.

You can also check the MTG Arena Status Page. Game, Matches, and Logins systems must all be operational in order for you to run Arena smoothly. If they aren’t, you’ll probably encounter difficulties trying to play.

With recent releases, probably won’t be no downtime, but you’ll have to restart the client to get the Brothers’ War patch anyway.

If you’re a bit bored waiting for The Brothers’ War Arena release, we’ve got you covered. In this section you’ll find interesting articles, special cards coming to Arena, and more interesting information to get more experienced with the set.

You can start by exploring Brothers’ War spoilers. There you’ll find the new cards, and some information about the new set.

It is a special set indeed with many interesting contents. Sadly, the Transformer cards are only coming in paper, and not to Arena. However, MTGA players will be able to enjoy both Brothers’ War full-art lands, and Retro Frame artifacts. These are special artifacts from all over the Magic’s past, and will appear in every Brothers’ War booster.

Last but not least, you can also read about the new (and returning) mechanics, coming with this set:

These articles should help you get a better understanding of these mechanics. This will, in turn, help you win more games – whether in Draft or in Constructed. Speaking of Draft, you can read our Brothers’ War Draft Guide, and get ready for drafting the newest set.

As always, you can look forward to a new code! This one will give you 3 free Brothers’ War booster packs. You’ll be able to find it and all other MTG Arena codes here, once the set goes live.

If you simply can’t wait to watch the new cards in action, you’re in luck. Thanks to the return of the Early Access Event, you’ll be able to watch your favorite MTG streamers play The Brothers’ War on November 10-11 (start and ending at 10 AM PT). This’s four days before the set goes live on Arena.

Before we wrap up, let’d take a look at which Brothers’ War events you’ll be able to play, once the patch is live. The two available draft formats will be Premier (best-of-one) and Traditional Draft (best-of-three). Sadly, if you’re a fan of Quick Draft, you’ll have to wait a couple of weeks before it becomes available.

If you prefer Sealed, both Traditional Sealed and Best-of-one Sealed will also be available, but for a shorter period of time.

That’s all about The Brothers’ War release time on Arena. Hopefully, the wait won’t be too long. Finally, if you don’t want to miss new Arena codes, or our articles, like draft guides, you can follow us on Instagram or Facebook. Have fun!

2 thoughts on “When Does The Brother’ War Release on Arena?”