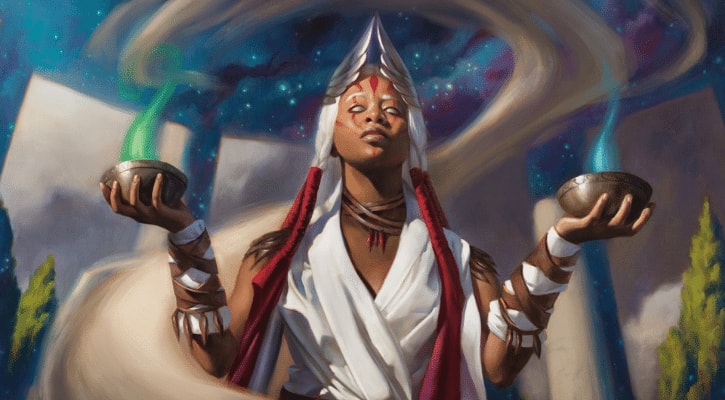 Good news everyone: 2020 is behind us at last. With just under a month before Kaldheim releases, we have a little bit of time to look back on the Year of Commander. In this article, I want to talk about the Standard-legal sets that came out and how they effected Commander as a whole.

Specifically, I want to highlight the new mechanics, acknowledge notable reprints, and discuss any other major highlights from throughout the year.

There were 4 sets this year:

It seems like so long ago that these titles were spoiled to the public. We anticipated returning to beloved planes and theorized about what could happen on a new one.

Now that we know the contents of these sets, these are some of the important mechanics, cycles, and reprints, as well as a discussion on their impact on the game of Commander.

There are two large reasons that Escape has been impactful in Commander: Uro, Titan of Nature’s Wrath, and Kroxa, Titan of Death’s Hunger. The former especially made waves when it was printed. It is valuable both as a commander and in the 99.

Beyond a few occasional one-of’s, Escape has had a medium-low effect on Commander.

Devotion is a fan-favorite returning mechanic. Unfortunately, outside of the gods, very few cards that utilize devotion have seen play in Commander. The most popular ones from this set are Gray Merchant of Asphodel, Nyx Lotus, and Thassa’s Oracle.

Another fan-favorite mechanic, Constellation was one of the most exciting parts of returning to Theros last winter. A new commander was printed to encourage players to build around the mechanic: Eutropia the Twice-Favored.

Unfortunately, Eutropia was only a two-color commander, and one of those colors had fairly little support in the first Theros block, and not enough the second time to inspire players.

It doesn’t seem like that long ago that Sagas were first introduced. Now, not even a year after THB released, we find out that new ones are coming out yet again in Kaldheim. They showcase a plane’s lore in a way that can be mechanically significant to the game.

Beyond Elspeth Conquers Death, Kiora Bests the Sea God, and Tymaret Calls the Dead, not many Sagas are seeing play in Commander. Even these are pretty rare. However, one little Saga that could is Birth of Meletis, which has proven its value in many white decks.

For purposes of Commander, Theros Beyond Death brought only a couple of relevant cycles:

Finally, there were a good handful of useful Commander reprints in this set:

The Spring set in 2020 took place on a brand-new plane: Ikoria.

With the support from the Ikoria Commander decks, the main set mechanics were actually able to reach over into Commander and influence the meta more than most other sets’ mechanics have in the past.

It is difficult to measure the impact that new Cycling cards have had on Commander. On the one hand, Cycling is a mechanic that has been around for decades. There are dozens of cards that both have cycling tacked on, or care about things being cycled.

On the other hand, Ikoria gave us efficiently-costed utility cards that could be playable even if they didn’t also have cycling.

The following are just a few of the many new Cycling cards from Ikoria: Lair of Behemoths:

Other than the legendary creature, Yidaro, Wandering Monster, and these highly playable new Cycling cards, Ikoria brought little to the Commander format in terms of the Cycling ability.

In the preconstructed Commander deck, Gavi, Nest Warden was a legendary creature that many have used as their Cycling commander. She not only makes cycling easier, but she also rewards you for cycling more.

Magic has used many creative ways to use counters in the game. In Ikoria, though, we saw an innovative new kind of counter. These counters granted a creature a specific keyword ability, such as Flying or Trample. These new kinds of counters allowed the player to be able to power up their creatures in a whole new way.

This mechanic had more influence on Commander through the Ikoria Commander precons than the main set. Without the Symbiotic Swarm deck, keyword counters would be almost non-existent in the format. Fortunately, Kathril, Aspect Warper is a build-around commander with keyword counters at its primary focus.

In my opinion, Mutate is the mechanic that did the most for Commander from Ikoria. There were 5 commanders printed in this set that had Mutate across the wedge-colored combinations:

Each of these creatures had a mutate ability that that was powerful whether the commander was the only creature with Mutate in the deck, or you packed as many Mutate creatures as you could in the 99.

Mutate is sometimes thought of as being a parasitic mechanic. If a mechanic is parasitic, it incentivizes the deck-builder to play a lot of cards with that mechanic in order to be powerful.

While a mutated creature’s power scales exponentially the more mutations it has, many Mutate creatures can be strong cards without more Mutate support. In other words, a creature that Mutates even a single time still buffs a non-Human creature as well as activates a Mutate ability (like drawing a card or destroying a creature). I have a feeling that more and more homes will show up in the future for Mutate creatures outside of dedicated Mutate decks.

Mutate did not need the help, but there was also an Commander 2020 deck that added a couple of Mutate synergies absent in the main set.

Now we arrive at the elephant in the room: Companions. The Companion mechanic was a cute gimmick to imitate the Commander format.

Unfortunately, the deck-building requirements requisite to use a Companion turned out to be less restrictive than anyone initially thought and Companions broke every format they were legal in. Every format, that is, except Commander.

The mechanic had to be retroactively errata’d to prevent the collapse 60-card formats. This change had the unfortunate side-effect of making the cards significantly weaker for Commander. As a result, fairly few Companions can be seen at a Commander table.

Significantly, Ikoria completed the Ultimatum cycle. These cards are powerful sorceries that were first seen in Shards of Alara in 2008. The five new Ultimatums have proven to be as popular if not more in Commander than the original Shards versions were.

In addition to the Ultimatums, there was a cycle of cards called Mythos of *3-color legend from the set*. These too are strong cards that have seen a lot of play in commander already:

I mentioned the Apexes previously. They each can Mutate onto a non-Human creature, activating their Mutate ability and turning that creature into your commander. Many of these creatures (both the Apexes and the Humans) have seen a good amount of play as commanders and in the 99.

A couple of very exciting things happened with M21. First, mill was finally keyworded. Mill is a popular, albeit casual, Commander archetype and having a keyword for it makes for easier notation and understanding for players.

Second, the Hound creature type was errata’d to be Dog. This brought on an influx in Dog Commander decks, including many led by the new Rin and Seri, Inseparable from Core Set 2021.

Beyond these changes, as well as the reprints and cycles that we will discuss later in this section, Core Set 2021 did not add any new mechanics to the game.

There were a couple of great cycles in this set. The first one worth mentioning is the Planeswalkers. There was one for each color:

In addition to these five cards, there was a cycle of legendary creatures from Core Set 2021 that make great Commanders.

Each one of them is tied somehow to Teferi’s story:

Lastly, M21 had six new Shrines to go with the original five from Kamigawa. These inspired what was probably the most popular deck from the set: 5 Color Sisay Shrines.

The big story with Core Set 2021, like much of the non-Standard sets from the year, was reprints. The enemy-colored Temples got a reprint, helping keep color-intensive mana bases cheaper. In addition to them, several other, more expensive cards were reprinted. Many of them see play across Commander, Modern, Standard and more.

Here is a non-exhaustive list of the best reprints for Commander:

This set marks the second return to the beloved plane of Zendikar. While the Eldrazi were not present this time, there were plenty of new toys for Commander players.

MDFC’s were the most innovative thing to come out in Zendikar Rising. On the front side, they are usually slightly over-costed spells. On the back side, most of them are mono-colored lands that enter the battlefield tapped.

These lands have proven to be invaluable resources in almost any Commander deck. They allow players to more consistently make their land drops in the early game and have more spells that can be cast later in the game.

There is one cycle of MDFC’s that can enter the battlefield untapped if you pay three life. These are those five cards:

These cards will continue to show up in Commander decks for years to come.

On the other hand, Party is a mechanic that has yet to be impactful in any format.

Cards like Tazri, Beacon of Unity, Coveted Prize, Spoils of Adventure, Journey to Oblivion, and Zagras, Thief of Heartbeats stand to improve greatly if Party improves over the next year or so.

You can find more about the Party mechanic in Commander here.

Like Cycling, Kicker is a very old mechanic that has been featured in multiple sets. The most important additions to the mechanic from this set were probably:

Also, there was a cycle of modal instants or sorceries called Inscriptions:

As far as it’s impact on Commander, Kicker already had a commander. Hallar, the Firefletcher was printed a few years ago in Dominaria. Unfortunately, Verazol, the Split Current was the new legendary creature from this set.

Verazol cannot play in Hallar decks and vice versa. This means that Zendikar Rising divided the game’s kicker cards between multiple commanders rather than strengthening the mechanic.

The last mechanic I’m going to talk about in this article is Landfall. Every time we visit Zendikar, players expect new landfall cards. Zendikar Rising was no exception. There were a lot of memorable Landfall cards in this set.

The elemental in the room is Omnath, Locus of Creation. Omnath made waves in almost every format it was legal in. As for Commander, it is the most popular legendary creature from Zendikar Rising. If someone wants to build a deck around the Landfall ability, Omnath is maybe the best option for them due to the power level and number of colors.

Other interesting Commander Landfall cards from ZNR are:

Here are some suggestions about how to build with landfall in Commander.

And with that, we finish the Standard sets from 2020. Seeing how Commander has changed over the last year has been an exciting ride. Here’s to another great year in 2021.

For more great Commander articles, check these out:

If you want to let me know what you think about 2020’s Standard sets, you can leave a comment down below, or you can find me on Instagram or Twitter.