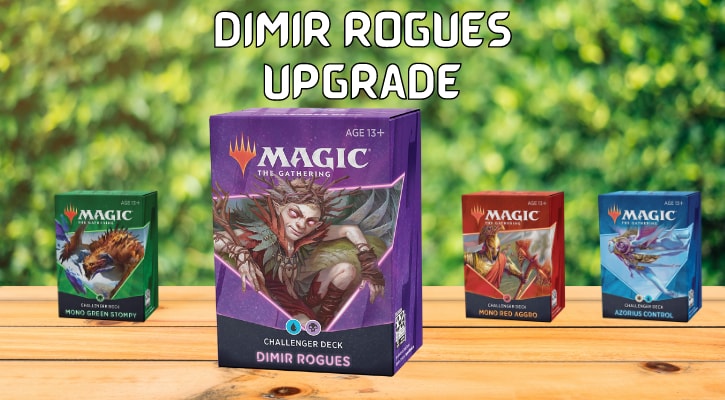 Got the Dimir Rogues MTG Challenger Deck and want to make it even better? Check out our Dimir Rogues Upgrade Guide!

There is a budget upgrade and a full upgrade for each of the 2021 Challenger decks. You can decide which one will work best for you.

The Dimir Rogues Challenger Decklist has most of what makes Rogues a competitive deck, but misses one key element- Card Draw. For our budget upgrades, we will be adding Card Draw to the deck. Let’s take a look at our new list:

Here is what we’ve changed:

The total costs of these changes is around $20-30, assuming you are able to sell/ trade your expensive cards such as Rankle, Master of Pranks. Let’s take a look at why they will help take your Dimir Rogues 2021 Challenger Deck to the next level.

The first change is removing the 4 Dismal Backwater. Rogues is a tempo deck that wants as little taplands as possible, and the reward of 1 life is not worth a land that enters the battlefield tapped, even if it taps for Blue and Black.

Because of this, we replace Dismal Backwater with Clearwater Pathway // Murkwater Pathway, as they are both able to tap for Blue and Black, but the Pathway enters the battlefield untapped.

The next recommended change is the crucial addition of 4 Into the Story in the main deck. To make room for this powerful card advantage spell, cut 2 Blackbloom Rogue, 1 Swamp and 1 Island. Rogues is a deck full of cheap spells and these extra lands are unnecessary.

We add even more card advantage to the deck by cutting 3 Nighthawk Scavenger for 3 Of One Mind. As previously mentioned, Rogues is a deck that wants to play cheap and efficient spells, and being a clunky 3 drop, Scavenger does not fit this bill. Of One Mind is another important part of Dimir Rogues’ card advantage engine, often times acting as a one mana draw two cards which fits Rogues’ game plan perfectly.

Another minor but important change is cutting one Malakir Rebirth for a single copy of Agadeem’s Awakening. While both cards fill similar roles, Agadeem’s Awakening has two key advantages: first, it’s land side can enter untapped. Secondly, it can also return multiple creatures, and doesn’t require a creature to die on the turn you cast it.

We also make room for a full playset of Ruin Crab. It’s a crucial card for Dimir Rogues, providing a huge amount of mill over the course of a long game and also functioning as a blocker against many aggressive strategies.

The final change made in the main deck is cutting 1 Rankle, Master of Pranks for a Heartless Act. While Rankle is a strong card, it costs 4 mana and can only be cast at sorcery speed. It does not provide an immediate game winning advantage like Zareth San. Because of this, we replace Rankle for a Heartless Act, which is a much better fit with this deck.

There are also 2 changes to make to the sideboard. While generally I prefer to leave the Sideboard as it is and let people optimize it depending on their expected metagame, there are some necessary upgrades in this Dimir Rogues Upgrade Guide.

Firstly, we cut the 2 Into the Story. While it’s great to play 6 Into the Story, we are now already playing 4 in the Maindeck which means we can no longer play 2 in the Sideboard. We replace them with 2 Skyclave Shade, which is a highly versatile card that is great in many matchups.

That’s it for our budget upgrades. Now let’s take a look at the full upgrade for Dimir Rogues.

The full upgrade for Dimir Rogues is based on Toni Ramis Pascual’s list from the Star City Games $5K Strixhaven Championship Qualifier. They piloted the deck to a 2nd place finish overall. Here are the changes you have to make to the budget version:

These are the changes you have to make from budget version to get to Pascual’s main deck. Let’s give them a look.

Firstly, all three copies of Zareth San are replaced for a suite of counterspells. In the current metagame, counterspells are very important as Sultai Ultimatum is the best deck, and games against it are often decided by whether or not their 7 mana spells resolve. Zareth San also can’t be played in a deck that wants to play Lurrus of the Dream-Den as a companion, so it makes sense to cut it for countermagic.

One Eliminate is replaced for a Castle Locthwain. This allows you to keep hitting your land drops, while also giving you extra potential to grind into the late game.

The final main deck changes are to the mana base. 1 Island and 5 Swamps are replaced by 4 Fabled Passage and 2 Zagoth Triome. Despite these lands sometimes entering the battlefield tapped, they act as great mana fixing, adding to the consistency of your mana base.

Additionally, Zagoth Triome acts as a redraw in the late game due to its cycling ability. Fabled Passage is also strong in Rogues, as it allows you to have two triggers off of your Ruin Crabs. Due to it’s cycling ability and counting as a swamp, allowing your Castle Locthwain to enter the battlefield untapped, we cut one Temple of Deceit for one more Zagoth Triome.

There is also one essential change to the Sideboard, which is the addition of Lurrus of the Dream-Den as a companion. Lurrus fits this deck perfectly, allowing you to grind into the late game. It does this while barely restricting the permanents you are able to play, as Rogues is a deck that plays low-cost efficient cards.

As for the rest of the sideboard, how you change it should depend on the decks that you expect to battle against. For some ideas, check out decklists from recent tournaments to look at the cards they’re playing, or ask me in the comments about the decks that you play against the most and I can recommend some sideboard cards to you.

Thanks for reading this article. That’s all you need to know about upgrading Dimir Rogues on a budget and into its final form.

If you want to play the Dimir Rogues Challenger Deck, you can buy it on Amazon. You might want to get some sleeves and a deck box for your new deck. You can find the best MTG sleeves here, and deck boxes here.

Until next time, and happy milling!