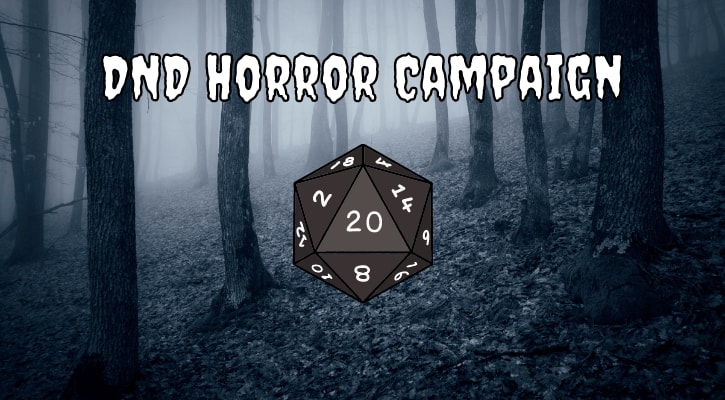 Do you want to learn how to make a frightening campaign? That’s great, as today I’ll talk about various things you’ll want to consider in order to make an amazing D&D horror campaign with a scary story-line.

Before I go into any details, there’s a book that needs to be mentioned, if we’re to discuss horror DND campaigns.

Most D&D fans have heard of Strahd and Ravenloft, but it is still sometimes rare to find horror themed campaigns. I’m a big fan of horror stories, and I like the new book, Van Richten’s Guide to Ravenloft.

It isn’t focused on a specific story or setting, such as Curse of Strahd. It instead focuses on running horror stories in general, using the many pocket universes trapped within Ravenloft. Furthermore, it’s an amazing book for anyone who wants to write their own horror D&D campaign. I’ll reference some interesting ideas that it provides in the following sections.

With that said, let’s move to some question you should consider, when you’re writing a D&D horror campaign.

When planning your horror story, a great place to start is to ask your players what are their characters afraid of. Now, if you’re playing with close friends, it could complicate things if you know if your players have any phobias in real life. Just because your friend Greg has claustrophobia doesn’t mean Gilgrim Evermead the dwarf has it too.

Before you start, talk to your party about your intention to run a horror campaign. Make sure to point out that if anyone has phobias that can ruin their gaming experiences, that they should warn you in private. The last thing any of you want is someone having a panic attack.

A phobia is an irrational fear of something, while normal fear is a rational reaction to a stimulus. So an example would be that I have claustrophobia that triggers even if I’m safe. I feel it if I’m just on a normal car ride, or in a building with a low roof. On the other hand, if you were trapped in a broken elevator or mine shaft, it would be rational for you to be fearful of being trapped in a small place.

Talk to your players on what fears and phobias their characters have. Also make sure they know the differences between phobias and fears. This can be difficult for some people that want to create brave warriors that are not afraid of anything. Remind them that fear is what allows adventurers to avoid danger and survive, and that someone that fears nothing won’t have fun in a horror campaign.

Van Richten’s Guide to Ravenloft has a good chapter on Fear and Stress. There is a table to roll random fears if your players need help. Stress is a super fun mechanic that debuffs players until they are safe to relax. Bad encounters with the horrors you face will cause stress to build up, resulting in penalties to attack rolls, saving throws, and skill checks. Even without the horror element, this is fun because stress is removed by relaxing, so it can be used to force a party to take breaks occasionally to help story pacing.

There are an infinite number of horror stories and genres, but some genres are more popular than others due to their ability to affect wider audiences. Van Richten’s Guide to Ravenloft goes into greater detail for each genre, but I’m going to focus on the story elements. The book has more details on quest hooks and potential villains.

As a group, your party are unstoppable heroes or villains. Individually, they’re squishy mortals. Now I’m not just talking about splitting the party into separate rooms or encounters. You want to make them feel alone, even if they’re in the same room as their entire party.

My fiancé and I are players in my friend’s game. We were all traveling through Ravenloft, and we came across a gallows. The rest of the party saw a random peasant hanging from the noose, but I saw a patient that died (my character is a doctor) and my fiancé saw her own body hanging. She began freaking out, “why are we seeing different things? Is he targeting us? What’s going on!?”

It is terrifying to have unknown elements target you and avoid your allies. This is a great way to bring tension into a horror story. Have the ghost only talk to one player. Have the slasher only target one character. Or, maybe have only one player see their allies’ shadows move of their own accord.

A lot of people pick environments that are meant to be scary, but it can be easy to miss minor details that actually generate that fear. A mental asylum or hospital is not scary by itself, but finding evidence of the people that lived and died there makes it scary. Finding a home that almost seems frozen in a moment of a loving family can be unnerving if the family is missing.

Show evidence that people lived in your environment. It doesn’t have to be diary entries or dead bodies, it can be as simple as describing someone’s desk being covered in cat related objects. The kitchen is perfectly organized, with cute drawings on the handwritten labels.

You can also show survivors, and through minor details show the hardships they’ve gone through to survive. The soldier with a dozen dog tags around their neck. The pale, sleep-deprived villager that is too exhausted to have a functional conversation.

Van Richten’s Guide to Ravenloft has a chapter about running a one shot as survivors of the horrors. It can be difficult to run a scary story with high level characters that can easily slay ghosts and have access to spells that can purify a corrupted location. Survivors are similar to level 0 characters, very weak and thus have to work harder to survive. The book also has survivor feats that the players could learn.

The book mentions using survivors as a one shot to introduce a setting. The players play these characters and get information to help their main characters later. I love this idea and want to take it further. Each survivor the players save during the one-shot will help them with information on loot or monster weaknesses. Each survivor that dies means another spirit to torment and kill the main characters during their investigation.

Most players have a rough idea how saving throws work in general. You perform a Dexterity saving throw to avoid a trap. Strength and Constitution are also fairly common. When I started horror campaigns, I was thrown off on Intelligence, Wisdom, and Charisma.

Let’s say I want to have a cursed house attempt to invade my players’ minds. If they fail, they’ll begin to see illusions and have difficulty telling what is real and what is not. What type of saving throw would that be? Charisma is rare and possibly the strangest due to it representing the force of your will and personality instead of actually mental strengths.

After a lot of research into spells and monsters, here is how I split it up.

One of the great parts of a D&D horror campaign is it gives you freedom to explain strange traps. The ghost tosses knives at someone. If you get too close to a cursed doll, it’ll try to possess you. Also, puzzles can be more open to interpretation. Instead of hitting 4 buttons in the right order, maybe the only way to open a door is to give a cursed doll its favorite hat.

Horror stories leave room for terrifying puzzles too. I had one where any player that looked at the runes carved into the ceiling had to do a Charisma saving throw. Anyone that failed fell to the ground unconscious, their mind trapped in an upside down version of the room. The puzzle had to be solved with players affecting both versions of the room.

Of course, Van Richten’s Guide to Ravenloft also has a chapter on curses, with great sample ones to build on. Curses are fun because you get to create a unique way for the curse to trigger, and how to remove it. D&D does have Remove Curse, but Van Richten’s says that extremely powerful curses will return after an hour.

Curses are a great way to craft unique puzzles. A player becomes cursed, and have to solve a riddle or puzzle to remove the curse. It can be something as simple as returning a stolen item to someone, or as complicated as cooking a ghost’s favorite meal during an encounter.

Metagaming is when a player uses previous knowledge to gain an advantage in a game. Not inherently bad, but if you want to have a mystery investigation where the party has to search for the creature and discover how to fight it, this can ruin your plans. You can’t have a mystery if your player figures out your monster, and they already know all its weaknesses and stats due to reading the Monster Manual.

One way to avoid this without punishing your players too harshly is to have the monster have some special weakness that must be initiated before combat. Maybe the monster is immune to damage until it is stabbed by silver, or exposed to a strong light source. If you do this, I recommend having a creature that’s not too strong for your party. Go down a couple challenge rating levels. It could take a couple rounds to initiate the weakness, and you don’t want anyone to die too easily during that time.

Another option is to change a creature’s resistances and weaknesses while leaving their stats mostly intact. I highly recommend reading the Dungeon Master’s Guide for advice on doing this. So let’s say you have a ghost that is a nun that was killed by a corrupt priest. She is attacking anyone that gets near the church, intending to harm some people to prevent the priest from killing more. It would make sense for her, as a holy spirit, to not be weak to usual things such as holy water and radiant damage. Maybe she drowned, and is weak to cold damage.

A great way to run the monster is to have separate stat blocks for the same creature. Have the players face a stronger stat monster, but it becomes a weaker monster when exposed to silver or sunlight. You can also have a weaker stat block that harasses the players throughout the investigation, and the monster has a stronger stat block during the final boss fight. It is desperate and not pulling punches anymore.

I hope this advice helps you in running a D&D horror campaign. If you have any fun stories, please share them in the comments below!

If you want even deeper knowledge about running this kind of campaigns, maybe get yourself the Van Richten’s Guide to Ravenloft.

However, if you’d rather read some shorter D&D articles, check out the following ones: