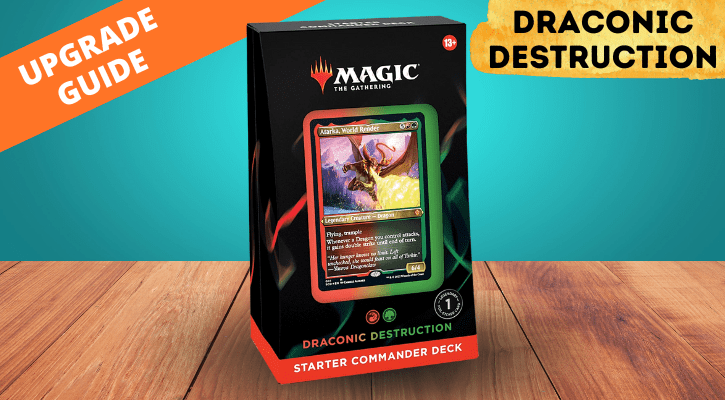 Draconic Destruction is one of the first five Starter Commander decks. This means that since the deck is somewhat different from regular precons, it’ll get a bit different Upgrade Guide.

First, I’ll assume that you’re a newer player. This is why I’ll try to explain some cards into a lot of detail. (If you aren’t, you’ll still find great advice on which cards to upgrade the deck with.)

Doing a complete upgrade of the deck, in one go, can be overwhelming for beginners. That’s why I only included three cards in the first section of the article. These three cards will immediately improve the deck significantly.

For a complete upgrade you’ll probably want to use cards from both sections, since just because a card is cheap, that doesn’t mean that it is weak.

At the end, I’ll give you some suggestions on which cards to cut, and provide a sample upgraded decklist. However, I’d recommend that you upgrade the deck in a way that feels best to you, and depending on your playgroup.

If you don’t already own the Draconic Destruction precon, you can buy one on Amazon. The great thing about the Starter deck is that they’re cheaper than the regular precons.

Before we start upgrading the deck, let’s check the Draconic Destruction decklist, as it comes when you open the deck:

How to Upgrade Draconic Destruction?

The best way to get direction for upgrading a Commander deck is to try to maximize its synergies with its commander. Atarka is the most expensive out of the five Starter commanders, so you really want to get some value for your seven mana investment.

In order to do so, you’ll need:

With that said, let’s start by finding the cards, which will help us reach our goals.

First up, here are the three best cards to quickly upgrade your Draconic Destruction deck with. For this selection, I didn’t pay that much attention to their budget, I only excluded some of the most expensive cards.

First up here is an amazing Dragon. Lathliss can pump all of your Dragons, which comes in handy with the double strike from Atarka. However, the most important part of its ability is the fact that you get a 5/5 Dragon token whenever another nontoken Dragon enters the battlefield.

Lathliss will provide you with a Dragon army in no time at all.

This artifacts fits two roles. It provides mana, so you’ll be able to cast your Dragons faster, plus if you spend this mana on Dragon spells, it’ll give them haste. This is a very powerful effect, giving you an immediate use for your big Dragons, including your commander, Atarka.

Tutor cards are cards that let you search your library for a specific card. Some of them, like Demonic Tutor can be quite expensive. Sarkhan’s Triumph is nowhere near that price, as it only works in Dragon tribal decks.

This means that it’s a perfect fit for your deck. You’ll be able to find the perfect Dragon for whatever situation you find yourself in. As there are many different Dragons with different effects, this card is excellent in the Draconic Destruction deck.

As I’ve mentioned before, in this section I’ll discuss cards that will improve your deck, but won’t be too expensive. Keep in mind that the prices of cards can change. If you’re reading this a long time after the article was published, some of these might no longer be that cheap.

Thrakkus the Butcher has a similar effect as your commander. Since you’ve build your whole deck around this effect, it’s good that you have an additional copy of it. It also pairs well with Atarka on board, as each Dragon will now be able to deal quadruple damage.

Skyline Despot bring the monarch mechanic to the mix. If you’re the monarch you can draw a card at the end of your turn. You stop being a monarch, if another players deals damage to you. They then become the monarch, until someone else deals damage to them. This mechanic is quite fun, and if you manage to stay the monarch for a whole turn, you’ll get a 5/5 Dragon token for your troubles.

Here’s another card that fits two roles. Ganax, Astral Hunter is both a Dragon, and a ramp card. It’ll take advantage of your Dragon synergies, and give you some Treasures, so you’ll be able to cast your big creatures earlier.

Ryusei, the Falling Star is a great Dragon to have when you’re behind. It’ll often clear most of the opposing creatures when it dies.

Sarkhan the Masterless isn’t technically a Dragon, at least not for the most part. However, it makes Dragon tokens, and has a great passive ability. If you have enough Dragons in play, opponents will probably avoid attacking you because of it.

Dragons have high mana costs, so you’ll want to have enough ramp in your deck, so they’ll come into play earlier.

Jade Orb of Dragonkind is similar to the Red artifact that we talked about in the Top 3 Cards section. It ramps you, but instead of haste, Dragons you cast get +1/+1 and hexproof until your next turn.

Kodama’s Reach is another effect like Cultivate. It’s a good effect in this deck, so you want access to both of these cards.

Since most of your Dragons are Red, Hazoret’s Monument will act as a ramp card. It’ll also improve the quality of cards in your hand, which is always useful.

Another card that isn’t technically a ramp is Monster Manual. You can first use its adventure part, or you can simply play it for four mana. It allows you to pay two mana, tap it, and put a creature from your hand into play. This is a great way, to “cheat” out some expensive Dragons.

Let’s take a look at some cards that while they’re fairly cheap, are still good cards, especially in your deck.

Rishkar’s Expertise is a great card draw for this particular deck. Dragons are big creatures, so you’ll be able to draw a lot of cards for six mana. On top of that you can play one card (with mana value 5 or less) from your hand for free.

Return of the Wildspeaker has a similar effect, but you also get the option of buffing your whole team.

Klauth’s Will is a very versatile card. There are some cards that deal damage to non-flyers in the original decklist, but non of them let’s you also destroy artifact and enchantments. You can easily swap them for this significantly better card.

Since a lot of creatures in your deck have high power, the effect of Warstorm Surge can be really powerful in this shell.

I’m a big advocate of playing lots of lands, especially in a deck with so many expensive cards. I’d suggest that you go up to 43 lands in this deck. So as a free upgrade you could add three basic lands to your deck, and remove 3 weakest cards. This will already improve this deck significantly.

My reasoning is that even if you’re playing ramp cards, you really don’t want to miss land drops. If you played a ramp spell, and next turn you didn’t have a land to play, you really didn’t accomplish that much.

If you’re afraid that you’ll draw to many lands, and have nothing to do, don’t worry. You’ll have plenty of card advantage spells in your deck, plus you can include lands that have spell-like effects. Some examples include:

Of course, you also want lands that provide both Red and Green mana, so you’ll be able to cast your spells. Such cards can often be pricey, but here are some budget friendly options:

So, the budget part of the article is finished, and it’s time to move on to the full upgrade. Cards that I’ll talk about here are either more popular, or have fewer reprints, than the cards above. You know, the whole supply and demand thing, which makes their price higher. However, if you don’t mind spending a bit extra, these will certainly make for a good Draconic Destruction upgrade.

Utvara Hellkite also has an effect that triggers whenever your Dragons attack. For each attacking Dragon you’ll get a 6/6 Dragon token, so you’re essentially doubling the number of your Dragons.

Dragonborn Champion is fairly cheap for a Dragon, costing only four mana. It’ll provide some card advantage when you deal damage to a player with a big creature.

Hellkite Charger is a Dragon with an unique effect. It allows you to have another combat phase in your turn. With its help, you’ll be able to take out multiple players in one turn.

Old Gnawbone is a big Green Dragon, that can provide you with a ton of Treasures. If you manage to set it up, you’ll probably be able to cast all the cards in your hand.

Urza’s Incubator is amazing in this deck. It can reduce the cost of your Dragons for 2 mana, and is an artifact, which is a bit harder to remove than Dragonspeaker Shaman. When your Dragons start coming into play two turns earlier, your opponents are going to be in big troubles.

Sarkhan, Fireblood is the perfect planeswalker for this deck. It help you draw better cards, and it gives you two mana for Dragons. Both of his abilities are plus abilities, which means, he’ll slowly get to enough loyalty to unleash four Dragon tokens.

Rhythm of the Wild is a very useful card. It can give your Dragon (or other creatures) haste, or a +1/+1 counter. On top of that they can’t be countered. This is particularly nice, it’s a real fells-bad moment if you pay a lot of mana only to have your big Dragon countered.

Lightning Greaves is another way to give your big Dragon haste, it also protects it from removal spells.

The Great Henge is a very good card in many Green Commander decks, hence the high price. You can cast at for as low as two mana with a big creature in play. The benefits it provides are enormous

Here are some non-budget utility lands:

Additionally, here are some good dual lands, that will enable you to cast your spell more consistently.

Commander decks consist of 99 card + 1 commander. This means that if you’re going to add cards to the deck, you’ll also have to remove that many.

So, how do you decide which cards to remove? I’d suggest you start with cards that either don’t work in the theme, and/or aren’t extremely powerful on their own. For example, Provoke the Trolls would be one such card. It does do something, but at a very bad rate.

Here are some of the other cards that I’d likely cut first:

Furthermore, once you add lots of lands that can produce both colors of mana, you can start to remove some of the lands that always enter the battlefield tapped.

Here’s an example of an upgraded Draconic Destruction decklist. Note that you don’t have to strictly follow this exact decklist – you should build your deck in a way that feels fun to you.

This is the end of the Draconic Destruction Upgrade Guide. Let me know in the comments if there are some amazing cards that I missed. There are so many Magic cards, that I most certainly should talk about some others as well, but I didn’t want this article to get too long and too overwhelming.

If you’re just starting out with Commander, here are some other articles that might interest you:

See ya next time!