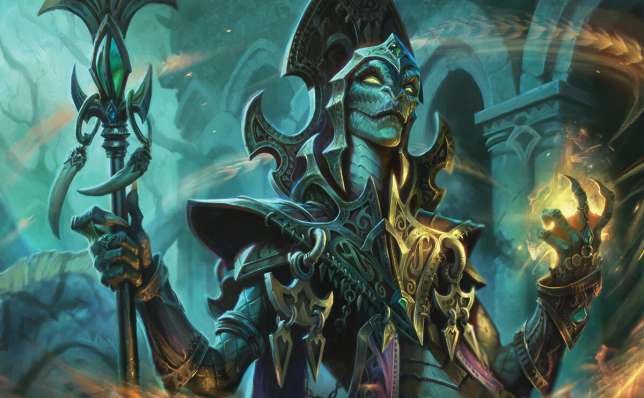 Do you want to win more with an awesome new Commander deck? We’ll upgrade all of the new Commander 2019 decks. We can help you make your Kadena, Rayami or Volrath deck even better with our Faceless Menace Upgrade Guide.

Each Commander 2019 deck features three different commanders. In each upgrade article, we’ll first focus on the main one – it this case Kadena, Slinking Sorcerer. Other two commanders are sometimes on the same theme, sometimes not. If they aren’t we’ll also take a look at how to build around them.

We won’t just say which exact 99 cards you should play. Where’s the fun in that? We’d rather give you interesting ideas for cards you might not know about, that would fit well in a certain shell. This way you’ll be able to pick cards according to your play-style and budget. Without further ado – let’s figure out how to upgrade the Faceless Menace deck.

As you can see Kadena, Slinking Sorcerer really cares about face-down creatures. That’s why it’s really important to pay attention to synergy when upgrading the Faceless Menace deck. On the other hand you shouldn’t forget about the simply good cards. Synergy is important – but good cards will really improve your win rate.

We’ll take a look at both of those two groups. Before we do that, we’ll check how face-down creatures and Morph works. If you’re a more enfranchised player, feel free to skip the next paragraph.

How Does Morph Work?

Permanents can have a keyword Morph. This means they can be cast face down for 3 mana as a 2/2 colorless creatures without creature types.

At any time player can cast an instant spell, they can pay its morph cost to turn the creature face up. This process doesn’t use the stack – this means players can’t Shock your face-down creature in response to you paying the morph cost.

A lot of morph card will also come with an additional benefit for turning them face up. Take a look at Thousand Winds for example.

Let’s say you have six mana and just need a big flyer. No problem, you can just ignore the whole morph text, pay 4UU and cast Thousand Winds as a 5/6 flyer.

You might have more mana though, or only three – in both cases you can play Thousand Winds face down for 3. Then you wait for the perfect opportunity and return a bunch of opponents’ creatures to their hands. You can even set up situations to reuse your creatures if needed.

Morph is usually a fun mechanic to play with. Especially if you have lots of them in your deck. This way your opponents won’t know what’s waiting for them face-down. It’s also great because it let’s you do something in the early game and still have powerful options in the late game.

Mostly the same as Morph – with one small upside. When you turn the creature with Megamorph face up, you put an +1/+1 counter on it. As such this keyword only appears on creatures.

How Does Manifest Work?

Manifest is another way of playing cards face-down. A card can instruct you to manifest another card – usually from the top of your library but it can be from other zones. One of the simpler ones is Soul Summons.

You put the top card of your library face down as a 2/2 creature. If it’s a creature card, you may turn it face-up at instant speed for its mana cost. If it’s not a creature, it’s just stays on the battlefield as a 2/2. You can however return it to your hand with cards like Thousand Winds so you can cast it normally.

Morph or no – three mana for a 2/2 creature is still a subpar rate. Kadena helps with your first morph which is great. Sadly, you won’t always have Kadena in play or you’ll want to play more than one morph creature.

That’s why cost reduction is important. You can do so with Dream Chisel or Ugin, the Ineffable. Ugin is particularly nice since it has other uses too. Wilderness Reclamation is another good one. You can play a morph or two in your turn and then unmorph them during your opponents’ turn.

Most of the Morph creatures are already in the deck. However there is a noteworthy exception however in Brine Elemental. It’s situational but can be quite powerful if you set it up correctly against a multiple opponents.

Manifest is another face-down mechanic which plays nicely with the deck theme. Some manifest cards we’d recommend are:

The deck is missing two great ramp spells in Rampant Growth and Kodama’s Reach. They would both fit nicely in the deck.

Because you have blue in your deck, you will want Cyclonic Rift. It’s quite pricey, but it really is a true Commander staple. It will make each one of your blue decks better.

You might want some more removal spells. Assassin’s Trophy and Casualties of War are both very versatile and you’ll probably always have a good target for them. Putrefy is also good and it’s pretty cheap too.

As a three color deck, you should pay attention to your lands. It’s not too flashy, but it’s an important part of every Faceless Menace upgrade. Some lands such as fetch lands can be pricier. Thankfully, other good lands were recently reprinted, so you should probably add some of them:

Remember that all of those lands are a great Faceless Menace upgrade, no matter which commander you’ll decide to play.

Fitting the theme of the deck is Zoetic Cavern. It’s the ultimate jack of all trades, master of none. It’s a bad creature, weak land or slow ramp spell. However it’s flexibility is nice, it plays well with Kadena and probably deserves a spot in your 99-card deck.

For your deck to remain at 99 cards (+Kadena of course) you’ll want to remove some cards. You should most likely remove cards that are either off-theme or simply too weak. Sometimes it can be hard to decide which ones to get rid of, so here are some suggestions.

The three commanders in this deck are very different from one another. During your Faceless Menace upgrade you should definitely decide which will be your main commander and remove the other two. If you’re building around Kadena, you don’t want neither Rayami, First of the Fallen nor Volrath, the Shapestealer.

Grismold, the Dreadsower is another build-around commander which doesn’t play well with Kadena. That’s why it’s better to get him out of the deck. You can however still build a green-black deck around him.

Hex is one of those cards that look great at first sight. Then you realize you always need to have 6 targets to even cast the card. Are there only five creatures in play? Can’t cast it. Does your opponent have four creatures in play and you have two? You’ll have to kill yours too. That’s why we’d recommend removing Hex, if you’re playing 1 vs 1. If you’re playing multiplayer Commander, you can still find spots where Hex will be amazing.

Overwhelming Stampede is actually pretty underwhelming in this kind of decks. Firstly you don’t really have that much creatures and it can be seen as a win-more. Secondly you already have Great Oak Guardian for a similar effect. You might want to cut either one of those and keep the card you like more, since it can sometimes still be useful.

Some of the other weaker cards are:

Rayami, First of the Fallen Upgrade

Building around Rayami doesn’t seem too hard. You’ll want creatures with keywords and ways to sacrifice them, so Rayami can get abilities at instant speed. You’ll also want some cards to boost his power, so you can get more value of those keywords.

First we want to give him some kind of protection. We don’t mean just protection as a keyword but in more general sense – also including indestructible and hexproof.

Amonkhet gods are great source for indestructibility as they also come with another keyword. Remember to play sacrifice outlets with them so they can die despite being indestructible:

Kefnet is perhaps the weakest of them since his attacking condition is pretty hard to reach. The other two are great since they’re both on double duty. Bontu is also a sacrifice outlet, while Rhonas can pump Rayami’s power.

As for the actual protection you can use cards like Phyrexian Crusader or Harbinger of Spring.

Sylvan Caryatid is great for both ramping and giving Rayami hexproof. If you need a very low budget card for hexproof you can use Nightveil Predator which also comes with deathtouch and flying.

Whenever a creature with trample gets blocked, you have to assign lethal damage to blockers, the rest of the damage goes to the defending player. With deathtouch 1 damage is considered lethal. That means if you have 10-powered Rayami with deathtouch and trample, which gets blocked by two creatures, you’ll deal two damage to blockers and 8 to the defending player.

Deathtouch also works well with first strike – you’ll creature will kill theirs before they even get to deal damage. Maybe Glissa, the Traitor is a nice upgrade to the Rayami deck.

Some of the other creatures with nice abilities include:

Get the Keyword Now

It’s often pretty valuable to get a certain abilities at instant speed. You can do so by sacrificing your creatures for value.

Some of the best sacrifice outlets for Rayami include:

One of the more powerful cards to pair with Rayami is certainly Flash. You can put an expensive creature with lots of abilities and maybe even a enter-the-battlefield effect in the play. Just imagine flashing – End-Raze Forerunners in the middle of combat. Your creatures get bigger and Rayami gets 3 more keywords.

To get more mileage from Rayami’s abilities, you’ll want to buff his power. You can do so with cards like Blackblade Reforged and Eldrazi Conscription.

If one Rayami proves not to be enough, maybe two will do? Forget about legendary rule with Spark Double.

Lastly, because of your sacrifice subtheme, Dictate of Erebos is an welcome upgrade to the deck.

A bit unintuitive way of building Volrath is with a poison subtheme. All you need is a Blighted Agent and a way to put two +1/+1 counters on it. Then you copy the Agent with Volrath and hit your opponent for 7 + 3 = 10 infect damage. And a player with ten poison counters loses the game. Congrats!

You can even put one counter on Volrath and another one on Blighted Agent with a Generous Patron. This card also works very well with Volrath by itself and is a worthy inclusion to your Faceless Menace deck if you decide to build around the Shapestealer.

Your main theme will probably be copying small creatures with abilities – and making them bigger. When Volrath won’t be able to that, maybe his Altered Ego will rise up to the challenge.

Last but not least you should pay some attention to proliferate cards. Proliferate is a mechanic that lets you put additional counters on permanents that already have some. Some examples include:

Hopefully our Faceless Menace Upgrade Guide was helpful to you. Maybe you can think of some great combo we missed? Tell us about it in the comments bellow!

If you want to try Faceless Menace Deck, you can get your deck on Amazon.

Anyways that’s all for now – until next time, may you morph a lot of creatures with Kadena, get all the keywords on Rayami and copy the best creatures with Volrath.