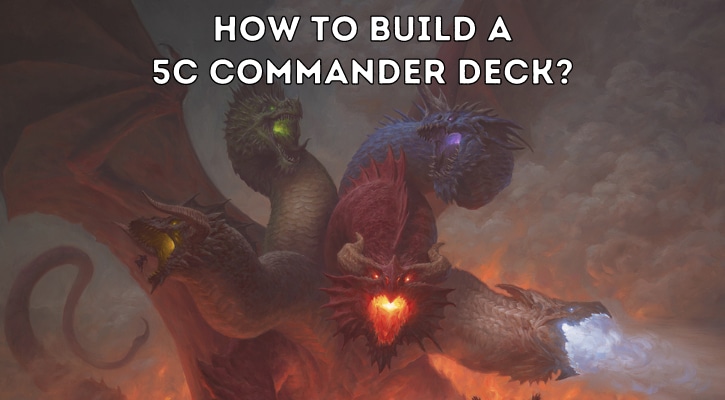 Every Commander player should try at some point in their lives to build a five color Commander deck. As someone who tends to do this a lot, trust me. They are a lot of fun. A lot of players are intimidated by this feat, though. Some say it’s too expensive, others think they are boring and uninspired. Well, in this article, I aim to make five color decks both more interesting to brew around and also more accessible to all kinds of players.

The Mana in a Five Color Commander Deck

One of the first things you have to figure out about building a five color deck is the land base. Five color Commander decks’ inherent weakness is that they have to have access to each color they need exactly when they need them. This is true for all decks, but the difference between having all five colors and only two or three is pretty significant. However, there are plenty of strategies that can ease this strain when building the deck.

First, I made a podcast specifically about building a five color mana base. Much of the content is similar to what I will write here, but please check it out on Spotify or Apple Music if you are interested.

A lot of people who build five color decks think that fetches, shocks, and ABUR duals are the best way to build them. Honestly, they are probably right. One of the biggest level-up moments in a Commander player’s career is when they learn how powerful these lands can be in combination with each other. It is probably reasonable to lump triomes together in this category, since they also offer great color fixing with fetch lands.

The biggest problem with these cards is that they are expensive. If you want to build one or more five color decks, and you want each of them to have “perfect” mana via fetches, shocks, etc., it’s going to end up costing you quite a bit of money. Although these cards are potentially the best way to ensure you can always cast your spells, they are by no means the only ones.

If you’ve played Magic for very long, you probably noticed that Wizards releases a cycle of dual lands just about every set. Usually, they enter the battlefield tapped and have some minor amount of upside to them. For example, Bloodfell Caves is a part of a cycle of lands that enters tapped, but gains you one life. Similarly, Izzet Guildgate enters tapped, but synergizes really well with other Gates or cards that care about Gates.

There are a good handful of these kinds of cards for three or more color decks as well. For example, Mystic Monastery and Dromar’s Lair are both part of cycles that make one of three different colors. They don’t help you ramp at all, but they make it significantly more likely that you will have the colors that you need to cast your spells.

I’m not trying to say that tapped dual- or tri-lands are good by any means. If you have the ability to replace them with ETB untapped lands, those will almost always be better. However, if you are trying to build five colors on a budget, these cards work extremely well. The sacrifice you make in tempo will be something you just have to deal with.

There are also a handful of cards that allow you to tap lands for any color of mana. Cards like The World Tree, Chromatic Lantern, and Joiner Adept, take a lot of cognitive stress out of the game by letting you tap any land for any color. There are probably a half-dozen of these cards in the game, so you probably can’t count on having them all the time without tutors. However, they could easily act as the glue that holds together your mana base.

I would also be remiss to not mention colorless mana rocks in this section. Signets like Izzet Signet and Talismans like Talisman of Dominance are both cycles that are easy to cast thanks to their generic cost and fix your colors. Plus, there are enough of them in the game that you can always have a critical mass in your deck if that’s the direction you want to go.

The last thing that I want to mention here is that a bit of self awareness could go a long way. Maybe you are a five color deck, but lean heavily into one or two specific colors. You can focus on the ways that those colors are good at ramping or fixing and rely on it for the rest of your deck.

For example, green is the obvious first though for this strategy. If your deck already has a major green theme (or simply has room to run a large package of green ramp spells), you can make most of your lands basic Forests and play Rampant Growth, Cultivate, Kodama’s Reach, etc.

White is not quite as good, but has a similar ability to be able to ramp out a bunch of lands if you need. Let’s say your five color deck runs mostly white cards. You can include mostly Plains to be able to cast most of your spells, then also have the white-based ramp/fixing package to help ensure you can get the other colors that you require.

You can employ a similar strategy with black and red cards, but most of their ramp is ritual-related, like Mana Geyser or Dark Ritual. If most of your cards are red or black, and you have a way to filter that mana into other colors, though, you could make this work just as well.

The only color that really struggles with ramping is actually blue. If you have a five color deck that is mostly blue, consider trying to add another focus color, or using a different strategy to have all of your colors when you need them.

How to Choose a Five-Color Commander

The next thing to consider when building a five color deck is to figure out who you want your commander to be. Honestly, figuring out the commander and the lands are probably the only difficult parts about building these kinds of decks. Most of the other cards will just fall into place. So, how do you decide which commander to run? It’s almost exclusively up to personal preference, but here are a few ideas to help you figure out which one might be a good match.

I pose the above heading as a question for one specific reason. Commander players are split, among many other ways, between either:

Commander decks have a bad habit of slipping into strategies that feel like “good stuff” when you add more colors to them. This is probably because there is a general idea about what cards are the strongest, and five color decks can play them all. Players end up running all the staples they can, and have very little room for anything else.

The fact that these “good stuff” decks are so strong makes certain people upset in a Commander pod. If you happen to want to build one such deck and have a playgroup that is okay with it, great. There are no problems here. However, if you either have personal convictions about not playing “good stuff” decks or have a playgroup that would rather you didn’t, here are some tips for adding variety to your decks.

Choose a Specific Theme for Your Deck

Mark Rosewater, lead designer for Magic, loves to tell players that, “restrictions breed creativity.” It seems counterintuitive to try to limit your options in the interest of coming up with something new, but it is true. Specifically in relation to building a Magic deck, the more arbitrary rules you impose upon yourself (within reason) the more unique and interesting your decks will be.

Decks that just want to play your favorite random cards are going to tend toward generically powerful upgrades. There is nothing stopping you from adding cards over time that are more and more powerful. On the other hand, if you want to build a five color “Oops, All Enchantments”, Splice Into Arcane, or Tribal Brushwagg deck, for example, you are going to have to choose which staples can fit into your strategy.

Cards like Rhystic Study, Sensei’s Divining Top, The Great Henge, or Necropotence will have to earn a slot in your deck by complementing the greater strategy – rather than simply being the best option in your colors.

A great example of this is General Tazri, secret Zada, Hedron Grinder. The deck uses Tazri’s ability to reliably tutor up Zada. Then, the rest of the deck is built around Zada’s ability to copy spells that target her. This way, you get all the benefits of playing a five color deck, but applied to a commander who would normally only allow red cards.

Oftentimes, secret commander decks need to include a lot of tutors or other ways to consistently have access to your secret commander. Keep this in mind if you are trying this deck building constraint. Five color commanders with tutor abilities include:

Focus On Something Different

Sometimes, when you build a five color commander, that commander wants you to do something specific. However, if you turn the card upside down, you might find that you can exploit something different about that commander. For example:

Each of these commanders tend to be associated with a specific thing. However, choosing to focus on one of their less-blatant abilities opens up the potential for a fresh new deck.

Once you have solved these two big problems, the rest of your five color deck just falls into place. Be sure to include your other deck building pillars like card draw, removal, etc. For more information on those topics, check out this article that goes over how to build your first Commander deck. Then, once you build your deck, playtest it as many times as you can. The more you play the deck, the more you will be able to recognize which cards work and which ones don’t. From there, you can make your own tweaks and improvements.

Good luck exploring the five color space in Commander. Like I said, I think five color decks can be a lot of fun. Let us know in the comments any other tips that you would have for building a WUBRG Commander.

You can also find me on Instagram or Twitter. I also mentioned earlier that I host the Gathering: My Thoughts MTG Podcast. I cover a lot of similar topics on that show.

If this topic was interesting for you, check out some of these other Commander-related articles: