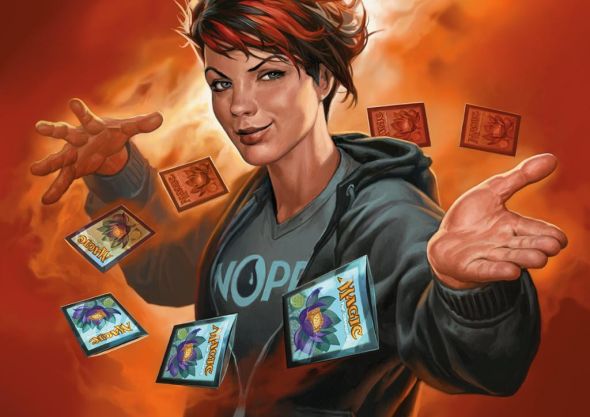 Today, we’ll talk about how to get better at MTG. We’ll share best tips and tricks on how you can become a better player and win more games of Magic.

Hopefully you’ll find something that works for you and you’ll level-up as a Magic player.

This is the most important rule if you want to become a better MTG player. You need to have a plan of how you’ll win the game. Once you have the plan in sight, each one of your decisions should work towards that plan.

Examples of a good plan:

Examples of a bad plan:

Play to Win, Not to Not Lose.

One mistake players make is avoiding losing at all costs. Sure, on the basic level it makes sense – if you won’t lose you’ll probably win, right? Well, that’s not quite true in Magic. Let’s take this scenario for an example.

In this theoretical scenario it’s quite straightforward that you shouldn’t. Instead, you should target your opponent, go to 1 life and hope that there’s another Lightning Strike on the top of your deck. Because if you don’t – you still need to draw two more Strikes in the next two draw steps, which is obviously less likely than drawing just one in one draw step.

However, in real scenarios it can be hard to identify when a play like this is correct and when it’s wrong. We’d recommend that when you try to make a defensive play, you ask yourself – does this help me win the game or am I just prolonging defeat.

Similarly, you shouldn’t play around cards that you can’t beat. Once you conclude that there is a certain card you just can’t beat, no matter what you do – you should play as if that card doesn’t exist. Because if your opponent has it, you’ll lose anyways.

Wraths are probably the most common card that players try to play around. For newer players – a wrath is a card that destroy all creatures, for example Kaya’s Wrath, Time Wipe or the original Wrath of God.

So when can you afford to play around wrath?

When you already have enough pressure on board and enough relevant cards in hand to recoup after a wrath. If you only have one creature on board, you need to play more, otherwise they can just kill it with a single target removal spell.

Now, if you just have a 2/2 in hand, you might as well play it. If they don’t have a wrath, it can make a difference. But if they do have it, a 2/2 won’t even do much against any real control deck afterwards.

2. Focus on Decisions, Not Results.

Imagine the scenario from above, you thought about it, played your 2/2, but they had a wrath and you lost. Did you make a wrong choice? Of course no, you made a correct assumption that in order for you to win, they must not have a wrath. They did, it sucks, but your decision was still correct.

Let’s take a look at another example. You’re playing paper Magic, you draw your starting hand. Cards are okay, but you only have one land, so you decide to mulligan. You take a look at the top two cards of your deck and see two lands. Oh no, you should’ve kept that hand, right? No, you didn’t know what was on the top of your deck and it doesn’t matter.

Deciding if a decision is correct or wrong based on the result is called results orientated thinking. You should avoid it. Don’t even look at the top card of your library, it doesn’t benefit you in any way whatsoever.

3. Think About What Your Opponent Thinks About.

Okay, you have your plan and you’re focused on your decisions. Now you have to realize that your opponent is also a thinking being with a plan of their own.

Sometimes your opponent makes a really weird play, one that you didn’t expect. You might think, they are just playing badly and made a mistake. That’s sometimes true, especially on the lower parts of MTG Arena ladder. However, once you reach Platinum, this is mostly not the case anymore.

For example if you’re opponent is attacking you with everything, although you have some great blocks, you should start thinking – why are they attacking like this? Would this attack make sense if they have Phalanx Tactics or maybe two of them? Once you figure out which card(s) they would need to have in order to attack like this, then you can safely assume that they have them and block accordingly.

Once you start doing things like this, your win rate will improve significantly.

4. Don’t Be Afraid to Mulligan!

Magic players often complain about too many lands or not enough lands. As we said – forget complaining, focus on what you can control. Mulligan is one thing you can control.

Beginners are often afraid to mulligan. That’s understandable – starting with one less card is never fun. Thankfully, the latest version “London mulligan” is quite user-friendly. You get to decide which one of the seven cards you’ll put back.

So when should you keep seven cards? In general – when you can have a powerful start with the cards you have. If that’s not the case, you probably want to take a mulligan.

We also wrote a Mulligan Guide, which goes into more details – along with some example hands. Examples might be a bit dated, but the concepts remain the same.

Looks you’re already doing it, since you’re reading this. That’s the right way to go. You can learn so much about Magic, even without playing. Some concepts can elude you for a long time, until you read about them. Then suddenly – BANG – something just clicks and you get it.

Of course there’s plenty of Magic the Gathering content available. So what should you focus on and where should you start?

Our favorite recommendations are podcasts. It’s easy to find a time to listen to them and since most of them are released weekly, you can find the most current info easily. Podcasts are also great for passing time in your daily commute, when you can’t just play Magic.

On the other hand, you should also read some articles. We’d like to think that you can find some good ones here, but some articles are simply all-time classics. Here are some of our favorite ones:

6. Netdeck AND Build Your Own Decks

Netdecking is Magic slang for copying a deck online and playing with it. It was once frowned upon for whatever reason. Nowadays, pretty much everyone netdecks and rightfully so. There are just so many Magic players. One individual doesn’t stand a chance of building a Tier 1 deck before whole Magic community does. That’s especially true if that individual is just starting out.

You should first focus on copying the decks from the best players, learn how to play with them and learn their ins and outs.

On the other hand there is value in building decks on your own, even if you don’t build the next tournament-winning monstrosity. You learn what makes a deck work and what makes it fail. So when you’ll copy another deck, you’ll know how to make a couple of changes to make it even better.

You know, how your turn usually goes. You think for a bit, see a line of play you can take and you do it. Or you just don’t think and immediately start playing cards and aggressively click on All Attack button.

Well, that’s all good if your goal is to get your matches done quickly. However, if you want to get better at MTG and start winning more, you’ll have to change your approach.

When your turn begins you should think about your plan again. How will you win the game? Then try to find a line that will allow you to do this. Got it? Okay, now do it again.

Try to find how you should sequence your cards differently, what your opponents might have, etc. Often you’ll find that your first idea wasn’t the best. Don’t be happy with the first good enough play you see, aim for the best one!

Once you’ll start doing this you’ll be able to find good lines faster and see a lot more possibilities than previously.

Last, but most certainly not least – we should talk about practice. You might’ve heard the saying about doing something for 10,000 hours before you master it. Same is true if you want to be one of the best players in Magic.

However, it’s not enough to jam games over and over, always repeating the same patterns. You want to have a quality practice. How would one do that? Well, here are some tips you can use:

Okay, one last bonus tip – when you’re trying to get better at MTG, don’t forget to have fun. When only thing you care about is your win rate, Magic can get a bit frustrating sometimes.

If you just want to have fun and don’t care about your win rate too much, feel free to ignore any of the tips mentioned above. However, if you’re having more fun when you’re winning, then you should stick to this advice, put in some hard work and you’ll get better at MTG pretty quickly.

If you’re looking forward for more of our content, including MTG theory articles, give us a follow on Facebook or Instagram. We make post whenever a new article is published. Besides we also have Magic news, spoilers and memes (as the one you see above).

Anyways, that’s all about how to get better at MTG. Have fun and may you become one of the best Magic the Gathering players ever.

4 thoughts on “How to Get Better at MTG? – 8 Tips to Become a Better Player!”