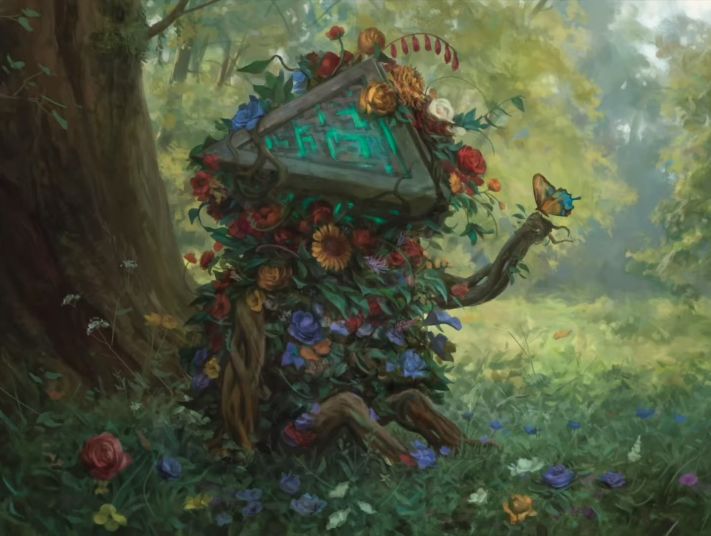 We’re finally having Zendikar Rising spoilers, and I’m already working on possible decks to go along with my future Happy Hedron mat (the one you can see above). It’s a given that Zendikar Rising will have tons of support for land heavy decks, so I’m going to go over Landfall and how to build Commander decks around this mechanic.

Landfall is the name for effects that trigger whenever a land enters the battlefield under your control. So you’re going to want lands not just for giving you mana, but also for activating abilities later in the game.

There are many good possible commanders for your deck, with a variety of colors. You obviously want to include green, but from there you have many options. This list is ordered from top to bottom in order of what I’d consider a threat at the table:

I know someone with a Yarok Landfall deck and it gets out of hand easily. Of all the commanders I love Yarok the most, because the deck isn’t built around him – instead he enhances the deck.

Muldrotha is pretty similar but with a higher mana cost. I would prefer Muldrotha in the 99, but I can see someone with sacrifice lands being scary with her.

Omnath, Locus of Rage is one of the most common Landfall commanders I’ve seen. He deals direct damage or overwhelms with creature tokens so he’s great for multiple win conditions. The one weakness I’ve seen with Omnath is that some players build him as a combo deck. So if someone kills Omnath, the deck fizzles.

I recommend cards such as Tilonalli’s Summoner, Tempt with Vengeance, and Zendikar’s Roil. Having elemental tokens will protect you until you can get Omnath ready. Plus any card that lets you sacrifice tokens will allow you to deal some damage before someone can kill your Omnath.

In addition, card like Brighthearth Banneret and Smokebraider can help you cast your commander.

Zacama, Kynaios and Tiro, and possibly Thrasios are all good options since they give you access to White mana. White has some of the scariest landfall creatures, such as Admonition Angel and Emeria Shepherd. They also give you ramp and outlets to spend your extra mana on.

Best Landfall Cards for the 99

So moving on, let’s take a look at which cards can best support your landfall commander.

For cards that go in the 99 I want to start with Boundless Realms. It’s a great card whether you’re just ramping or triggering tons of Landfalls. Some similar cards that I enjoy are Traverse the Outlands and Tempt with Discovery.

Similarly, Hour of Promise is great if you have nonbasic lands such as Field of the Dead or Valakut, the Molten Pinnacle.

Collective Voyage and Rites of Flourishing are great for Landfall but also help your opponents. I do recommend Rites because even if it helps your opponents, it’ll help you more and you can use it as a political tool to get other players on your side. Helping a mana screwed player could hopefully help you later if you need to team up against a bigger threat.

You’re going to want some additional land ramp cards such as Farseek, Harrow, and maybe even Farhaven Elf if you want more creatures. Burgeoning is great but keep in mind you’ll need card draw to make it useful in the late game. Storm Cauldron is great for recycling your lands for Landfall triggers, but will also make you a large target so it heavily depends on your playgroup.

Playing Lands From the Top

Courser of Kruphix, Wayward Swordtooth, and Oracle of Mul Daya allow you to play lands from the top of your deck, which helps you get to your nonlands faster.

You want to pair them with cards that help you play extra lands to both ramp and get your Landfall triggers. Some of the best ones are:

Dryad of the Ilysian Grove does the same plus helps you with your colored mana for decks with 3+ colors.

Now for some actual triggers when a land enters the battlefield. Some of the major staples include:

In addition you also have Evolution Sage, which is only worth it if you run a decent amount of planeswalkers or lands that use +1/+1 counters. It also works amazingly with Undergrowth Champion, an already powerful Landfall card.

Battle for Zendikar featured a cycle of landfall enchantments. Each color got one and they all give you a choice of two effects, whenever a land enters the battlefield. Their power level usually depends on your deck.

Worldshaper is great if you want to run cards that mill or discarding land cards as costs.Crucible of Worlds and Ramunap Excavator let you play lands from your graveyard, which work amazingly – both with fetch lands and with a general mill plan.

Of course, all of those cards also work with Elvish Reclaimer, which will be tutoring out your best lands.

Crash of Rhino Beetles can be great if you like big green creatures. On the other hand, every creature can become big with Blackblade Reforged – making it a must deal with threat.

If you’re looking for a planeswalker to include, you have – not one, but three good Nissa cards:

Some other good mentions that more heavily depend on your colors are:

Now for a Landfall deck, the manabase is important. You’re going to want more basic lands than normal decks since so many cards only search for basic lands. I usually see 40 lands for these kinds of decks. Depending on how many colors you have, I would recommend 10-15 nonbasic lands. The more colors mean you’ll want more lands that tap for multiple colors.

For some nonbasic lands that’ll help, I’d recommend Thespian’s Stage and Vesuva, both of which can copy any of the lands I’ve previously mentioned.

I’d also recommend any lands that bounce other lands, such as Jungle Basin or Gruul Turf. Myriad Landscape and Blighted Woodland help produce mana when you start out, and later you can use them to trigger your Landfall cards.

I imagine we will see some powerful new Landfall cards in Zendikar Rising, that will work great in Commander, so you want to keep up with Zendikar Rising spoilers here. In case you’re building a new deck, you might want to also check best deck boxes for Commander.

If you want more details on specific Landfall commanders, please comment and I’ll write articles on specific decklists. You can also message me for advice at casual_clerics_play_mtg, an Instagram that my girlfriend and I run for Magic the Gathering and Dungeons and Dragons.

Anyways that’s all about landfall in Commander, until next time have fun and may your land drops trigger a ton stuff!