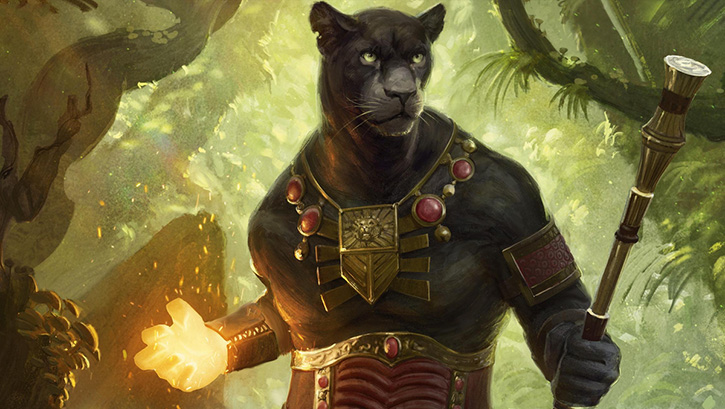 So you bought Nature’s Vengeance Commander deck and want to make it better? Our Lord Windgrace Upgrade Ideas will help you with that!

This year around Commander decks contained less powerful reprints than usual. The new cards are still powerful and awesome though. As a result of that we have plenty of room for upgrading this deck.

Since the Commander is all about building fun and unique decks, we won’t give you an exact list of cards to swap. Neither will you get a finished decklist. Instead we’ll show you plenty of cards that will be an awesome addition to a Lord Windgrace deck.

Did you hear about two of Lord Windgrace’s best friends for ever?

The first one is called The Gitrog Monster. It works great with Windgrace’s first ability. You discard a land and you get Ancestral Vision. Frog also get’s lands to your graveyard which is a nice combo with Lord returning them to the battlefield.

Monster synergiezes with all land-matters stuff. Don’t forget that you can get your landfall triggers twice each turn!

Besides being an awesome card, The Gitrog Monster also has an awesome origin story. You should check it out if you like short stories.

Omnath, Locus of Rage will be even angrier if you don’t put him in your deck.This is a good commander all by itself but it’ll also shine in Lord Windgrace’s deck.

You know what the plan is.

You can probably guess what step 3 is. You just use Windgrace’s second ability and get two lands into play. The profit of course being two 5/5 Elementals.

Omnath is also great with any other cards you have that put lands onto the battlefield from your graveyard, library or elsewhere.

With a deck like this you really want to have enough lands and quickly so you will want to add some of the good ramp spells that are missing from this deck. Kodama’s Reach, Farseek and Rampant Growth can all fill that role easily. Don’t forget that Farseek can grab you some of the dual lands if you will add those to your deck.

New saga The Mending of Dominaria fits perfectly in this deck. Its first two chapters are the same, getting you a couple of cards in your graveyard and returning a creature. When the last chapter comes, you’ll get all lands from your graveyard to the battlefield. Mending is especially good if you have enough creatures in your deck.

If you don’t have a lot of creatures it’s probably better to just get Splendid Reclamation. You’ll get the lands on the battlefield immediately. This is especially good if you have a lot of ways to put lands into your graveyard.

One of the best ways to put them there is certainly Scapeshift. It’s an awesome card in any green deck but it’ll really shine in this one. Because of this it was very expensive – selling for almost $60. It’s recent reprint in Core 2019 brought its price significantly lower, so now might be a good time to buy it. You can check its price here.

With so many cards that give you extra lands you should definitely pay attention to landfall cards. The deck already has some of those in form of Avenger of Zendikar and Rampaging Baloths.

However if there is a single card you should add to a deck – it is Tireless Tracker. The best landfall card actually doesn’t have landfall written on it. With Tracker every land you’ll play will eventually turn into a new card. And Tireless Tracker can also grow pretty fast in a deck like this.

Lotus Cobra can get you an insane amout of mana along with cards like Scapeshift. Zenidkar’s Roil can act as a mini Omnath.

With so many cards you have to be careful to never run out of cards. You should probably play some cards with X in their mana cost since they are pretty flexible. You can cast them early and they get even better later with more lands you have.

Torment of Hailfire can be an awesome way to finish a game. It can finish your opponents all at once or leave them with a bunch of unpleasant choices.

If you fell behind and you have nothing left but lands just cast Gaze of Granite and your opponents will soon be in similar position.

When runing out of cards to cast, drawing Wildest Dreams from top of your deck is certainly awesome feeling. It gives you an opportunity to cast your awesome cards again!

My Lands Can be Spells

New players often cut lands from their decks since they can seem pretty boring. But there is no need for your lands to be that. Especially with a deck focused on lands.

Memorial to Folly can buy you back a creature in the late game. Similarly Memorial to Unity can find one from the top of your deck.

If your friend plays an annoying graveyard deck, Bojuka Bog can surely help a lot. If some of their land are too good, you can get rid of theme with Wasteland or with a cheaper alternative Field of Ruin.

Urborg, Tomb of Yawgmoth can help you with your black mana. It can also help your opponents if they’re playing black, though.  You might want to use it in pair with Cabal Coffers, which will then give you plenty of black mana.

A lot of our Lord Windgrace upgrade ideas were focused on getting lands to your graveyard. One of the easiest ways to do so is to play lands with cycling. Not only will you get a land in the yard, this will also prevent drawing too many lands in the late game. Mono-coloured ones are Forgotten Cave, Barren Moor and Tranquil Thicket. You should also get the two cycling dual lands in your color Canyon Slough and Sheltered Thicket.

For you manabase to function properly you’ll need to add some dual lands. Some of them are more expensive (Badlands) than the others (Blood Crypt).

Here are some examples of the budget ones you could get:

Fetch lands (Verdant Catacombs) would be great for a deck like this, but at least you have the slow fetches (Mountain Valley).

You could also get shock lands, the three of them for this deck are Blood Crypt, Overgrown Tomb and Stomping Ground. However in end of September 2018 there comes a new edition Guilds of Ravnica. It’s speculated that the shock lands might return then therefore falling in price. Because of this it might be a good idea to wait until then to get your shock lands.

When the game is nearing its end you can use the following combo to finish your opponents.

You should have either Borborygmos Enraged or Seismic Assault on the battlefield. You discard all lands you have in hand to them and start dealing damage to your opponents. Continue by tapping all of your lands for mana. Try to aim for at least 12 mana. Then sacrifice all of your lands to Zuran Orb.

The combo isn’t infinite but in the late game it probably gives you enough damage to finish even three opponents all at once.

Let’s find out exactly how much damage you can do with this combo.

With combo you can discard lands you start with in hand three times. Lands you have in the graveyard and on the battlefield you can discard two times. So in total we discard 3 * H + 2* (G + B) lands. How much damage is dealt depends on which discard outlet we have. Seismic Assault will double previous number and Borborygmos will triple it.

Let’s say you have two lands in your hand, 6 in the graveyard and 14 on the battlefield. So we can discard 3 * 2 + 2 * (6 + 14) = 46 lands. With Seismic Assault we can do 92 damage and with  Borborygmos it comes 138 damage. So if there aren’t any infinite lifegain shenanigans you should certainly win the game.

For the final Lord Windgrace upgrade ideas we should mention some card that are simply just good. Realms Uncharted is already a good card in most of green decks but it shines in this deck, where you’ll want to have lands in your graveyard. With Lord Windgrace it often won’t make much of a difference which pile of lands will your opponenet put in your graveyard, because you’ll simply get them back.

Speaking of good stuff, we should probably mention planeswalkers. They can be really fun and powerful addition to any deck. Nissa, Vital Force is no different. If you want immediate value, you should certainly just use her second ability and get back your best permanent. However when you think you can protect her until your next turn, just use her first ability get and additional 5/5 to protect her. And next turn you can already use her ultimate ability! With every land you’ll play, you’ll get a new card.

If you’ll follow our Lord Windgrace upgrade ideas, you’ll be the one playing a lot of lands. Probably more than your opponents. Therefore you might want to get Nissa’s emblem for everyone in form of Horn of Greed. You’ll get it in play faster then the Emblem, but it will be more fragile. Although other players might not want to destroy them since they’ll also draw cards.

We hope that you liked our Lord Windgrace upgrade ideas. If you’re considering buying the deck go check its price here. If you want you can even get all of them on Amazon.

If you are a fan of Commander format you should’t miss our List & Review of All Commander Precons.

Check our Instagram account to never miss another article of ours. We have plenty of awesome photos of Magic the Gathering cards, great Commander tips and ocasional givaways.