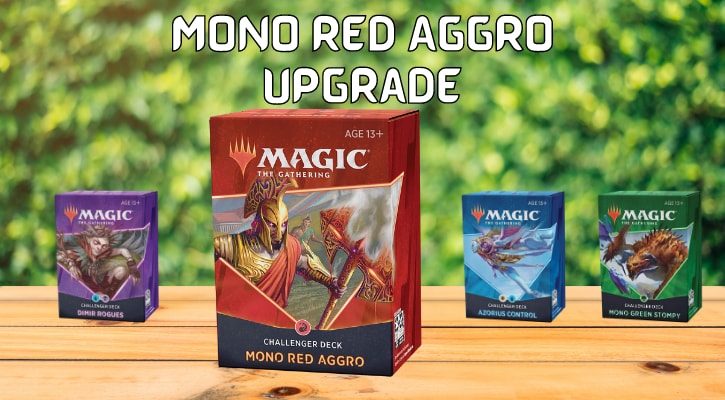 There is a budget upgrade and a full upgrade for each of the 2021 Challenger decks. You can decide which one will work best for you.

The Challenger Decklist for Mono Red Aggro is very solid, but there are some important budget upgrades, that can take the deck to the next level. Let’s take a look at the cards we change for the upgrades.

(Out/In shows which cards will be replaced and what for.)

Let’s take a look at why these upgrades are beneficial to the deck:

The first upgrade that I would recommend is swapping Akoum Hellhounds for Fireblade Chargers.

Hellhound may seem like an appealing card, as it’s a one drop that is able to attack for two. However, most of the time it’s just a 0/1. In addition, it also has zero late game presence and is a poor blocker.

Because of this, we switch it for Fireblade Charger, which is a much better card for the deck. Unlike Akoum Hellhound, it is able to trade for most one and two drops in Standard, and can often be a 2-for-1 if it eats a removal spell and kills a one-drop. It also never becomes a completely dead card, as even if it is killed by a larger creature, it still deals one damage to the opponent.

We also completely change up the mana base to support better flex lands and Frost Bites. While Spikefield Hazard is a flex land, it is a poor one. Dealing only one point of damage is a small upside compared to entering the battlefield tapped. This tempo loss can be devastating for a deck like Mono Red. The downside of entering tapped and preventing the deck from curving out is not worth the upside of one damage.

Compare this to Faceless Haven, which provides a 4/3 creature and still enters untapped, and it is clear that Faceless Haven is a much stronger inclusion for Mono Red Aggro. In addition to this, the fact that Faceless Haven is considered a land until you activate it is very important in the current Standard, as it dodges many sorcery speed board wipes such as Extinction Event and Shadows’ Verdict.

One of the advantages of playing a Mono- Colored mana base is playing flex lands, and between our Castle Embereths and Faceless Havens, this upgraded list takes full advantage of the flex lands available.

To support our Faceless Havens, we replace all 16 Mountains and 3 Roil Eruptions with 19 Snow-Covered Mountains.

We also replace 4 Shocks with 4 Frost Bites. This version of Mono Red Aggro wins through board presence rather than burn spells, and Frost Bite clears out more opposing creatures than Shock.

I have not suggested any budget upgrades to the sideboard, because I believe that it is more important to have an optimized main deck first. However, sideboard upgrades will be included in the optimized decklist.

However if you want to start slowly upgrading your MTG 2021 Mono Red Aggro Challenger Deck, I would recommend the following upgrades:

Our Full upgrade is based on Kai Budde’s February league weekend decklist. Let’s take a look at the changes between our final upgrade and our budget upgrade, in both the Maindeck and sideboard.

Firstly in the main deck, we replace 4 Kargan Intimidator for 4 Robber of the Rich. While Intimidator is a strong card, Robber has haste and is also one of the lone sources of card advantages for Mono Red Aggro.

The other change to the main deck is replacing 1 Castle Embereth with 1 Embercleave. There are already 25 lands in the deck including Shatterskull Smashing, so the extra Castle Embereth is unnecessary.

Mono Red Aggro wants to be playing 4 Embercleaves due to its sheer power in the deck. After a few games, you will see why people who play Mono Red Aggro often say “believe in the cleave”.

As for the sideboard, I have copied Kai’s league weekend sideboard. This is just a recommendation of a successful sideboard, I would recommend building your own fifteen card sideboard based on what decks you expect to be playing against the most.

That’s all you need to know about upgrading Mono Red Aggro on a budget and into its final form. Hopefully, this Mono Red Aggro Upgrade Guide will help you make your deck better and win many games.

If you want to get the Mono Red Aggro Challenger Deck, you can buy it on Amazon. Additionally, you might want to get some sleeves and a deck box. You can find best MTG sleeves here, and deck boxes here.

Until next time, and believe in the cleave!