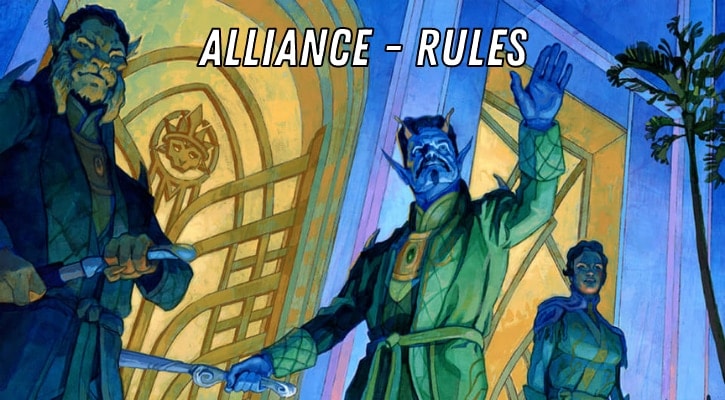 Alliance is a new MTG mechanic introduced with Streets of New Capenna, and it’s closely tied to the Cabaretti family. In this article, we’ll talk about everything you need to know about it, including:

How Does Alliance Work?

Alliance is an ability word. It highlights triggered abilities that trigger whenever another creature enters the battlefield under your control.

So if you have a creature with alliance in play, and you play another creature, you’ll get a benefit of some sorts. This benefits can vary from card to card, with better effects appearing on rarer cards.

Alliance lets you double its power until the end of the turn – whenever another creature enters the battlefield under your control. So if you play one creature, it becomes a 2/3. If you play another one in the same turn, it becomes a 4/3 and so on.

As we said, not all cards will work in the same way. For example, Gala Greeters is already a very different card:

This card gives you multiple choices whenever another creature enters the battlefield under your control. It can either get a +1/+1 counter, or it can give you a Treasure or a couple of life points.

So, to recap: Alliance is an ability word that appears on creatures, and it means that something good will happen whenever you’ll get another creature in play.

Here are some commonly asked questions about the alliance mechanic. If you don’t find an answer to your question, leave a comment below, and we’ll get back to you as fast as we can.

What happens if I play a creature and I have multiple creatures with alliance in play?

All alliance abilities will trigger.

How does alliance work with multiple creatures entering the battlefield at the same time?

If multiple creatures enter the battlefield at the same time, your alliance abilities will trigger multiple times. So if you’d play Raise the Alarm, you’d get two creatures, and therefore two alliance triggers.

Creatures with alliance mechanic are looking for, well, alliances. They are going to make them with your other creatures. So whenever new creatures enter the battlefield under your control, a new alliance is formed, and there’s going to be some kind of benefit from it.

There aren’t that many unusual interactions with alliance, but there is a way that can let you get a lot of value from it, and that’s by playing multiple creatures.

As we’ve mentioned in the FAQ section, if you get multiple creatures in play at the same time, you’ll also get that many alliance triggers. So you could use something like March of the Multitudes in order to get a ton of triggers.

Let’s say you had our first example, Devilish Valet in play, and you get six tokens in play with March of the Multitudes. Without any other buffs, Valet’s power becomes 64. Now that’s some real damage!

Similar “combos” can be done with other alliance cards.

This mechanic is very similar to the landfall mechanic, with the main difference being that it works with creatures instead of lands, which is why some players refer to it as creaturefall.

That’s all about MTG alliance mechanic. Hopefully, you’ll be able to use it in order to win more games. If you want to try your luck and open some Cabaretti cards with alliance, you can get yourself a New Capenna Set booster box.

Furthermore, if you’re looking for more information about New Capenna, you can check the following articles:

Until next time, have fun and may you make a lot of strong alliances!