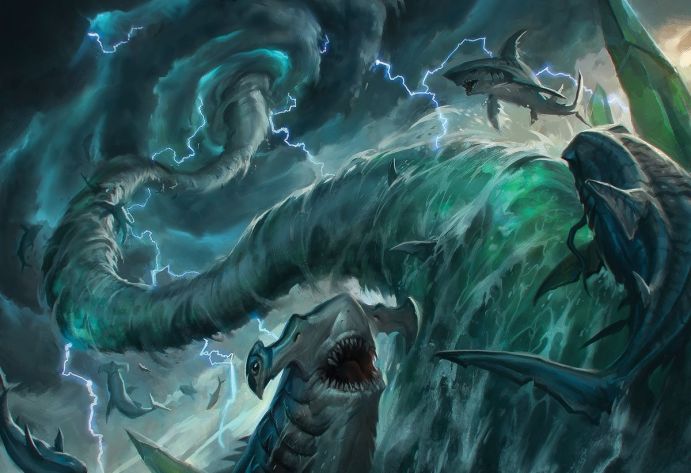 Hello and welcome to our selection of best Standard decks for MTG Arena. Here you’ll find the perfect deck for you, depending on your play style.

The Standard Tier List is updated one every month or when major changes happen. The latest update was made after the bans and Companion changes. You can expect a new update next week, when the new metagame starts to emerge.

We separated decks in three Tiers:

In the next couple of days we’ll also be adding a fourth one – Tier Fun! There you’ll find unusual decks, built around less played cards. They’ll usually have lower win rate, but should still be fun to play.

We have three decks in Tier 1. After the Companion changes and bans these decks still have what it takes to compete at the highest level.

Red-White Cycling is one of the best Standard decks and it’s also the most budget friendly. It plays only 5 rares, making it very easy to build on Arena.

Even though Lurrus now costs 3 additional mana to put in your hand, this deck still has all major tools to work with. First you can make a big Flourishing Fox. If that doesn’t pan out you can go wide with Valiant Rescuer.

Your big finisher is Zenith Flare, which mostly just wins you the game on the spot.

Jund Sacrifice was good enough to stand on its own when Lukka Yorion decks were still intact. It’s surely good enough now.

You play the standard sacrifice package including Witch’s Oven, Cauldron Familiar and Mayhem Devil. The “new” addition is Bolas’s Citadel, which provides a nice source of card advanatage.

If you’re a fan of midrange decks, this is probably a great choice for you.

The big winner after the bans is Temur Reclamation. The deck has been around since Wilderness Reclamation was printed in Ravnica Allegiance.

It’s as good as it always was and even better now that all other best decks got major nerfs. Deck wins with big Expansion // Explosion or with the newest addition Shark Typhoon.

Beware of Teferi, Time Raveler as it messes up with casting spells in your end step. If you have Reclamation in play, you can probably get rid of him by using Blast Zone.

This Mardu Lurrus deck pushes the sacrifice synergies to the max. It’s very powerful when the deck comes together, but mediocre when it doesn’t.

Its problem is the same as with every other sacrifice deck – consistency. Sometimes you draw only sacrifice outlets, and little to no fodder (or the other way around). Also, when you stretch your mana to enable three colors, you’ll lose some games to your mana base, as you don’t play any tap lands.

Some cards like Claim the Firstborn can be insanely strong in some matchups, while completely useless in others.

The addition of Lurrus made up for some consistency issues. However, now that you need to pay 3 additional mana, the deck is certainly somewhat worse. Some changes might be made in the future. Maybe by abandoning Lurrus as a companion and just playing it main deck.

Speaking of decks that have been around for a long time, Temur Adventures hasn’t changed much from Throne of Eldraine Standard.

There’s only one card from Ikoria in the deck – Ketria Triome. That’s expected because the deck heavily relies on the adventure mechanic, which is self contained in Eldraine.

The deck can hold its own against the most decks in the metagame and is pretty fun to play. Even if you haven’t played Arena in some time, you might already have all the cards for it.

Flash decks have been a part of Standard for a very long time. It was even made into a Challenger Deck. Sometimes they’re good and sometimes they’re medium. When you have the right mix of threats vs counterspells, it’s practically unbeatable, but that doesn’t happen that often.

The latest versions added red for access to Bonecrusher Giant and Fire Prophecy plus some sideboard cards. If you enjoyed Simic Flash, you’ll probably like this one too.

The deck might be in for a comeback, as it might be a strong choice against Temur Reclamation.

Looks like Blue-White control found its footing once again. This time by playing 80 cards to enable Yorion, Sky Nomad.You’ll now need to pay 3 mana to get Yorion into your hand, but that’s still worth it in a deck like this.

It plays everything you’d expect a control deck to play:

Counterspells are currently well positioned against the best decks in Standard. Of course, that’s until they resolve their own Teferi, Time Raveler.

So if you’re a fan of classic control decks, this one will suit you nicely.

What’s there to say about mono red, that hasn’t been said before? It’s still here, it’s still fast, although less strong that it was before. Lots of other decks got improvements with Ikoria, while the mono red ended up with pretty much nothing new.

However, in the light of recent bans, all of that changes. Every other deck got nerfed, which in turn made mono red better. If your opponents stumble early, you’ll get some easy and quick wins on Arena.

For a hot second, Bant Yorion seemed like it could be one of the best Standard decks. Then Lukka Yorion came around and did pretty much everything that Bant was doing, just in a better way.

Now that Lukka got its major pieces banned, Bant might be ready to become good once again. You’ll still play Yorion and get it once you have some extra mana laying around.

Tribal decks are still present in Standard, with Knights being somewhat playable. The main addition from Ikoria is most certainly Fight as One, which does a lot of work for a measly one mana.

Be prepared to mulligan away hands that don’t enable fast starts, as this is not a deck that does well from behind. If you can take advantage of your explosive start, you can win plenty of games with Mardu Knights.

There’s actually a competitive mutate deck present in the current metagame. It’s only playing creatures, which unlocks Umori, the Collector as companion. Sure it costs more now, but you already want to be playing mostly creatures, so the opportunity cost is pretty low.

With this deck you’ll be able to have 15+ permanents in play on turn four. So check it out if that’s your thing. Latest upgrades contain some interesting cards choices by MTG Hall of Famer, Willy Edel. One such card is Pouncing Shoreshark, which wasn’t present in previous versions.

Blue -Black Flash is all about Slitherwisp. You’re playing most of your stuff on your opponent’s turn and try to get small tempo advantages wherever you can.

The deck need some more tuning but it can definitely become a real player in this Standard format.

This odd deck takes advantage of both Obosh, the Preypiercer and different sacrifice synergies.

You have your cats, you have your ovens. You have Judith, the Scourge Diva and Mayhem Devil, which both deal tons of damage with Obosh in play.

While the deck isn’t one of the top best Standard decks for Arena, it’s definitely a solid choice for everyone who likes sacrifice decks. Since the nerfs of Companions, the deck has fallen to the bottom of Tier 3.

This is basically a mono red with only odd cards. For the sacrifices it has to make, you get a guaranteed Obosh, the Preypiercer.

Obosh makes sure that you’re never flooded with your late game cards, like you’d be with Torbran, Thane of Red Fell or Embercleave in the past. However, you still have access to a game-winning card exactly when you need it.

All of that changed when they made Obosh cost 3 extra mana. Nowadays, it’s probably not worth it over a simple mono red deck. However, if you like to try a different take on mono red, this is one possibility.

Do you have a decklist that preforms well on Arena? Share it with us in the comments bellow!

The current best deck for Arena Standard are Red-White Cycling, Jund Sacrifice and Temur Reclamation. Any one of these will certainly serve you well.

Anyways, that’s all for today. Have a great day, and may you reach Mythic on Arena without a sweat.