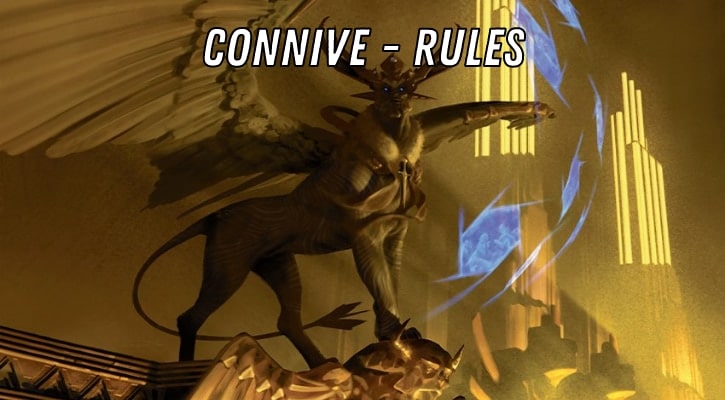 Connive is a new MTG mechanic introduced with Streets of New Capenna, and it’s closely tied to the Obscura family. In this article, we’ll talk about everything you need to know about it, including:

How Does Connive Work?

Let’s take a look at an example or two.

When Echo Inspector enters the battlefield, it connives. This means that you draw a card, then discard a card. If you discarded a nonland card, you put a +1/+1 counter on Inspector. That’s it.

So, do creatures with connive always do so when they enter the battlefield? No, that’s different on a card to card basis. Here’s another example:

Body Launderer is a mythic and has a bit more complex connive trigger. It connives whenever another nontoken creature you control dies. This means that in the right deck, it can be a massive threat.

Here are some answers to questions that you might have about connive. If there’s something that we didn’t answer, you can leave a comment below, and we’ll get back to you.

When I connive – do I discard first, or draw first?

Can I connive if I have no cards in hand?

Yes, you can. You’ll draw a card, and immediately discard it. The creature will get a +1/+1 counter if the discarded card wasn’t a land.

How to decide what to discard with connive?

What happens if a creature dies before it would connive?

If your creature would connive and an opponent destroys it in response, you’ll still get to draw a card and discard a card.

To connive means to secretly allow (something immoral, illegal, or harmful) to occur. Drawing and discarding a card doesn’t seem particularly immoral, but the drawn card is certainly a secret from your opponent. Nevertheless, the isn’t such a flavor win, as some other New Capenna mechanics.

In this section, we’ll talk about some interactions and synergies that connive presents.

Madness is a mechanic that works nicely with connive. It lets you play a card that you’d otherwise discard.

So you could discard Big Game Hunter to one of your connive abilities, and you’d still be able to play it for a single black mana, destroy a big creature, and put a +1/+1 counter on the creature that connived. A pretty nice synergy.

This is another card that also lets you play cards that you’d otherwise had to discard. Since Containment Construct was printed in Kamigawa: Neon Dynasty, this means that you’re able to build a janky Standard deck. It probably won’t be amazing, but there might be some fun combos available.

This one is more of a tip, than an interaction. If you have cards with connive in your deck, you don’t want to play out every land in your hand. At least in the land game, you’ll want to keep a useless land in your hand if you’ll draw a card with connive. This way you’ll be able to get rid of the land, and perhaps find a more impactful card.

This is especially important in Limited formats (New Capenna Draft and Sealed), where connive will be an important factor.

Another format where you can make at least some use of the connive mechanic is Commander. One of the five New Capenna Commander decks, Obscura Operation, has a commander that uses this mechanic.

Kamiz makes one of your attackers unblockable, that creature also connives. So if, you’re a fan of both this mechanic and Commander, you can get yourself an Obscura Operation precon on Amazon.

That’s all about connive. Hopefully, you now know how it works, and you’ll be able to make some smart decisions that will win you the game. If you want to try your luck and potentially open some Obscura cards with connive, you can buy a New Capenna Set booster box.

Additionally, if you want more information about New Capenna, you can take a look at the following articles:

Until next time, have fun and may you always discard the correct card to connive.