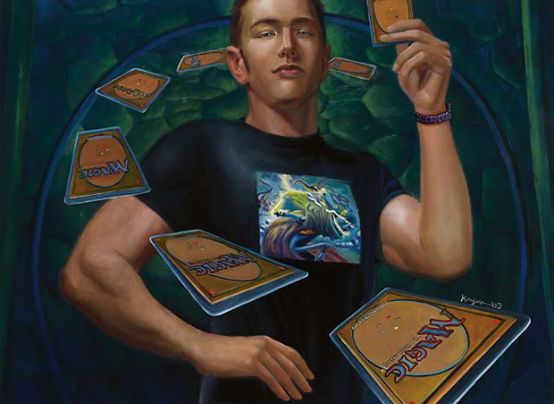 For many players, drafting a deck in Magic is the most rewarding way to play and build a collection of cards. Because of this, the draft format has become a staple both in gaming shops and on MTG Arena.

However, if you aren’t confident in your drafting skills or you have never tried, it can seem daunting. Building a deck on the fly with an element of chance and competition? Where to even begin…

Luckily for you, most of us who draft remember that feeling, and I would love to guide you through the process. From the very beginning of the draft to building a more successful deck.

What is MTG Draft?

Magic the Gathering Draft is a Limited format. This means that you don’t need a deck to play it, just three boosters per player. You need eight players for optimal draft experience.

First, each player opens a booster pack, picks one card out of it and adds it to their pile. Then they pass all other cards to their left neighbor. From the cards that are passed to you, you pick another card and pass the rest to the left. You repeat the process until there are no more cards from the first booster.

At the end you’re left with 42 cards. From those cards you have to build a 40-card deck. You can also add ass many basic lands as you want (usually 17). When your deck is built, you can start playing the games.

Drafting is even simpler on MTG Arena, where you don’t need to worry where you have to pass the cards. The program will do that for you.

Anyways, let’s talk about how you can draft a good deck that will win you lots of games.

Before you even get to the draft (or spend your hard-won gold on Arena), you can start helping yourself out by doing your homework. The more you know, the more informed your decisions are. That’s why it helps to learn the set you are drafting before you even begin. Here is some information you want to know.

Pay attention to what instants are likely to be drafted by your opponents. This will allow you to better identify what each bit of mana your opponent leaves untapped is capable of doing.

Did your opponent leave two mana open on your turn? In that case you can play around cards like Eliminate or Titanic Growth. However, that’s only possible if know what instants are in the set you’re drafting.

The Colors and Color Combinations

Obviously, the colors are not going to be different from set to set, but they might be trying to accomplish subtly different things. For example, green in Core Set 2021 is more concerned with +1/+1 counters than with ramp effects.

Knowing all of this will help you make a plan while you select your cards.

Once you have sat down and opened you first pack, you have some exciting decisions ahead of you. Your first pack may have some big exciting mythic rare, which can make your first pick pretty easy. As that’s not always the case, let’s go over things to keep in mind throughout the selection process.

The first pick is a great opportunity to pick the biggest, most impactful card you can (think Questing Beast or Terror of the Peaks). The next 2 or 3 picks will be lesser variations of the same thing. You are generally picking the most individually impactful card available and not locking your color(s) in yet. Be flexible and willing to abandon an early pick or two, in case your next picks lead you away from their color or archetype.

“Reading the signals” is the phrase used to describe paying attention to trends occurring at your draft table. Take note of what good uncommon and common cards are being passed up by the player to your right. Do they seem to be the same color? Does the color of your first pick seem scarce now?

For instance, if you notice that you’re getting good blue uncommons (like Shipwreck Dowser), that may mean that blue is largely uncontested. You would probably want to shift your focus to blue in that case. Maybe that means abandoning your strong first pick. However, you’ll get rewarded with good cards later in the draft. You have to identify what the other players are neglecting or prioritizing for this to work.

Side note: Two packs come from your right and one pack comes from your left. This means that the player to your left has a more significant influence over your picks. Keep that in mind as you read the signals.

It is incredibly tempting to draft the shiny rare card whenever you open a pack, and sometimes, that is the right decision. However, draft decks do not guarantee the same synergy that constructed decks can have. That makes some of the unique effects of rare and mythic rare cards downright bad.

In M21 draft, for example you have Chromatic Orrery and Transmogrify as interesting cards with relatively unique effects. Nevertheless, Scorching Dragonfire will be far more helpful far more often.

There are no hard and fast rules as to what constitutes the most effective draft deck. However, if you want guidance on how “creature-heavy” a deck should be, this might help.

Generally speaking, you want a higher proportion of creatures than of noncreature spells. Usually, you can aim for the following:

Of course, that is just a suggestion, and your deck can certainly defy that norm without sacrificing any competitive edge.

You should select your cards as you see fit and only use this ratio to help inform trickier decisions. Imagine you have are torn between a Shock and a Bolt Hound. It might help you to consider how many creatures you have in relation to sorceries and instants.

I am not just yelling mundane foodstuffs at you; “BREAD” is a commonly used acronym to help new players categorize and evaluate individual cards in the packs they open. It can be a useful tool to remember what kinds of cards should be considered better then other kinds.

Here is a brief rundown:

Bombs refer to the most individually impactful cards available. Baneslayer Angel and planeswalkes like Garruk, Unleashed are “bombs”. They have to be dealt with immediately or they can win the game single-handedly. These cards are the best of the best.

Removal encompasses any card that remove your opponent’s creatures. Cards like Soul Sear and Capture Sphere fall into this category. Removal cards are very important in giving your deck consistency.

Evasion applies to all cards that are hard to block. Cards with flying, unblockable, or protection fall into this category. They are your win conditions, which makes them more desirable than their average counterparts.

Aggro cards are cheap creatures. While often that means aggressive ones, it can also be a reminder to more controlish deck. They also need cheap creatures to defend from opponent’s aggresion.

Duds are cards that are not really worth playing. This can be due to the card’s lackluster effect, high cost, or the set drafted. Some people might refer to these cards as “pack-fillers,” but “BREAPF” seems silly to me.

Categorizing cards with these labels can help you make decisions during your draft.

Once you have drafted and played your games, I hope you strive to improve. Learn your weaknesses and strengths. Don’t just jump into another draft immediately. Here are some question you should try to answer, if you want to improve:

Practice will really help you improve as a player, so don’t feel discouraged after some losses. You get to keep your cards, the memories, and the experience that might help you win in the future.

This guide to a more successful drafting experience is designed to help find comfort and enjoy the games. You won’t just immediately start to smash the competition, but your win rate will definitely improve. With that in mind, do your best and have fun.

Will you be playing a draft in paper? In that case you might want to get some sleeves or deck boxes.

If you want to learn how to draft a specific format, here are some draft guides for currently available format on MTG Arena:

Don’t want to miss another article that might help you improve your game? Give us a follow on Instagram or Facebook. You’ll get reminders about new articles, MTGA codes and Daily Deals, Magic memes and more!

3 thoughts on “How to Draft – Ultimate Guide to MTG Draft”