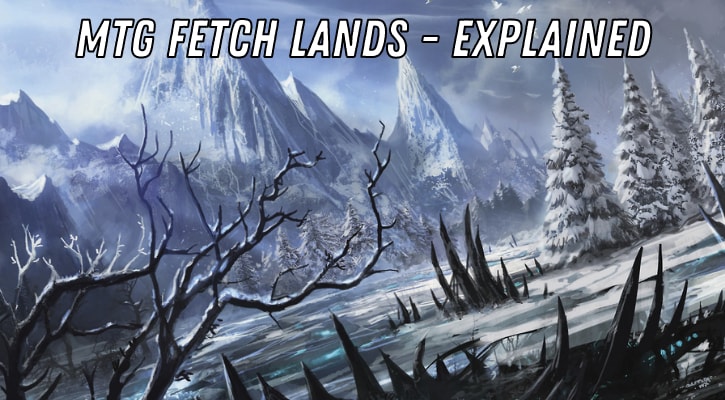 In this article, we talk about everything concerning MTG fetch lands. We answer the following questions:

So without further ado, let’s get right into it.

What are MTG Fetch Lands?

Fetch lands are lands that allow you to search your library for a land, when you sacrifice them. They usually don’t provide mana on their own. They are called fetch lands or fetches, because they go and fetch you a land.

Below each land, you have a check price button, which will take you to the corresponding Amazon page.

There are five Onslaught fetch lands:

Onslaught fetches are named after their first appearance in Onslaught edition in 2002. Since then, they had the following reprints:

All of them also have Judge Reward Promo versions. Flooded Strand has another special version – Nationals Promo. Both of these have pretty small supply, though.

Zendikar fetches are named after their first appearance in Zendikar edition in 2009. They got quite some reprints since then:

Why are Fetch Lands Good?

New players often don’t realize what makes fetch lands so popular. You have to pay a life to get a land that produces mana. Why not just play the land that gives you mana in the first place?

Well, imagine a three color deck. Let’s say it’s in Abzan colors – white, black and green. Now, you could play Sandsteppe Citadel, which gives you all three colors, but it enters the battlefield tapped.

But if you play Windswept Heath you can go get Overgrown Tomb, Godless Shrine or Temple Garden. This way you effectively have access to any of the three colors of mana – coming into play untapped!

As you can see, fetches work great with shock lands (like Temple Garden). They are even more powerful with original dual lands (for example Savannah). But these are quite expensive and also not legal in some formats like Modern.

Often times the shuffling part is ignored. Yes, it doesn’t matter in most cases, but when it does – it’s absolutely crucial. One of those cases comes up constantly with Brainstorm.

You can put two bad cards on top of your library, then shuffle them away, when you use a fetch land. This way you can draw a random card next turn, which is generally better than the one you put on top.

Imagine you have Tireless Tracker in play. You play a Forest and you get a Clue token. What if you would play a fetch land instead?

You’d play Windswept Heath and get a Clue, you’d sacrifice Heath, go get a Forest and you would get another Clue. So each fetch land basically doubles your landfall triggers.

When Will Fetch Lands be Reprinted?

Enemy fetch lands just recently got reprinted in Modern Horizons 2. Before that, they got a reprint as a part of the Zendikar Rising Expeditions.

That’s why we aren’t expecting a fetch land reprint very soon. However, once it does happen, we might only get the allied fetch lands, since these had fewer reprints.

Why are Fetch Lands so Expensive?

As we’ve talked before, fetch lands got various reprints. However, some of them were negligible like the Secret Lair versions, Judge and WMCQ promos. A more meaningful supply is provided by big reprint sets such as Modern Horizons 2, Modern Masters 2017. Similarly, Zendikar Rising Expeditions also added some relevant supply to the market.

Onslaught was way back in 2002, but Khans of Tarkir supplied fresh allied fetches in 2014. Zendikar fetches have only one big printing in 2009. MTG’s player base grew immensely from 2009, not to mention 2002.

So the most relevant Standard printing is the one from Khans of Tarkir. That’s why the allied fetch lands have a moderate price, despite not receiving any major reprints recently.

All things considered, the overall supply good better recently, especially with the reprints from Zendikar Rising Expeditions and Modern Horizons 2. However, it’s not so big that prices would start falling anytime soon.

As we’ve seen, fetch lands are fantastic. That’s why a lot of players want them. They are staples in:

They are banned in Pioneer, otherwise you’ll see them there as well. Therefore, demand is massive and since the supply is moderate, so the fetches are still quite pricey.

The ten fetch lands mentioned above are the best and the most well known. However, there are some worse versions that fit the definition of a fetch land. Let’s take a look at them.

There are five Mirage fetch lands:

Mirage fetches were the original MTG fetch lands that debuted in Mirage (1996). Because they enter the battlefield tapped, they’re also known as slow fetches.

They don’t see much play in most competitive formats. However, they are a reasonable budget replacement for fetches in casual Commander.

Panoramas are fetch lands that can only get you a basic land of the specific three color combination. Even though they can immediately tap for colorless mana, they aren’t particularly good.

Besides cycles of MTG fetch lands there are also some that aren’t a part of a cycle. They still search your library for other lands, so they will trigger your landfall twice.

Which fetch land is your favorite? Let us know in the comments bellow.

Do you want more Magic the Gathering trivia? You can read about the Reserved List here and learn why some card will never be reprinted. If you’re playing Magic on a budget, you can find out which are the Top 10 cheap and powerful cards here.

To never miss another article of ours, or to laugh at some memes, follow us on Instagram or Facebook. If you have any more question about Magic, go ahead and ask us either there or in the comments bellow.

That’s all for today, have a great day and may your fetch lands always be in mint condition.