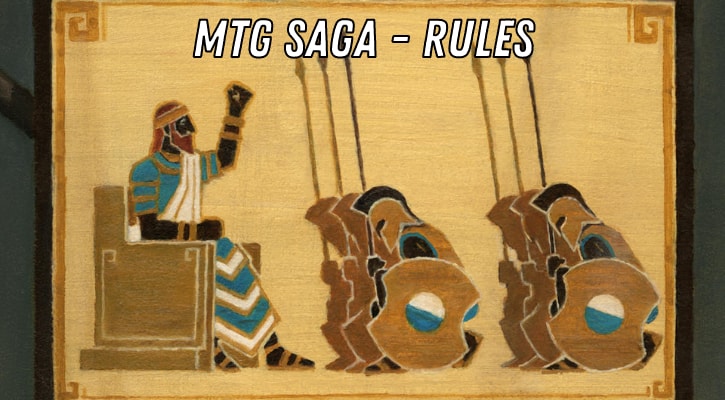 In this article, we’ll explain what is a Saga card and how does a Saga work. You’ll learn every rule and interaction with this enchantment, so you’ll be able to get the most value out of them.

Sagas first appeared in Dominaria in 2018. They were very popular, and they’ve since returned in the following sets:

What is a Saga?

Let’s see how it works.

How Do Sagas Work?

Every Saga has three or four chapters. They are represented by the roman numbers I, II and III — sometimes also IV (column on the left). Each chapter has an effect.

Saga usually gets a Lore counter:

Let’s take a look at Arni Slays the Troll as an example.

You pay two mana and cast Arni Slays the Troll. When it enters the battlefield, you immediately put a Lore counter on it. (You can use dice to represent counters. On Arena, there will be a little icon with a number.) When the first counter is put on the Saga, the first effect triggers. You get to fight one of your creatures with one of your opponent’s.

Nothing else happens with Arni Slays the Troll until your next turn. It just stays in play with one counter.

On your next turn, in your first main phase, right away after your draw step, you put another counter on the saga. (This is the first thing that happens in your main phase. You can’t cast creatures before it finishes resolving.) Then, Arni Slays the Troll has two Lore counters. So the second chapter triggers. You get one red mana, and you can put two +1/+1 counters on one of your creatures.

After your next draw step, Saga gets the third Lore counter. You gain life equal to the greatest power among creatures you control. Then you have to sacrifice Arni Slays the Troll.

As you can see, chapters usually synergize with one another. The last chapter of the Arni Slays the Troll will hopefully kill all creatures that had to attack you before, because of the second chapter.

Sagas from the new Kamigawa set work a bit differently. At first sight they look almost the same as regular sagas:

However, there’s an icon on the top left corner, and a power and toughness mark at the bottom left. That’s because Kamigawa Sagas transform with the last chapter. So, what’s on the backside?

It’s a 2/2 enchantment creature with first strike. One thing to note here is that the backside is affected by summoning sickness. When the last chapter triggers, the Saga is exiled then returned to the battlefield transformed. This is different from the Werewolf transform mechanic, which simply transforms the creature, and doesn’t exile it first.

Let’s check some of the most frequently asked questions about MTG Sagas. If you don’t find the answer here, ask us in the comments below. We’re glad to help.

Is Saga a permanent?

Yes, Saga is an enchantment and therefore a permanent.

Does proliferate work on Sagas?

Do Sagas work with Constellation?

Yes, Saga is an enchantment — when it enters the battlefield, it will trigger your Constellation cards (such as Setessan Champion).

Can you have more than one of the same Saga in play?

Yes you can. Saga does not mean legendary.

It does however count as a historic card. But that has a very narrow meaning. Historic cards are legendary cards, artifacts, and Sagas. They trigger some cards from Dominaria like Jhoira, Weatherlight Captain.

What does it mean if a Saga has Read ahead?

If a Saga has Read ahead, you get to decide, how many Lore counters you’re going to put on it. You can read more about Read ahead rules here.

Do Sagas use the stack?

Putting the counter on Saga doesn’t use the stack. It happens immediately and can’t be responded to. The trigger then goes on the stack, and you can respond to that trigger.

Can I return a Saga to my hand in response to the last chapter?

Yes, you can use a card like Rescue in response to the third (or any) chapter trigger. The Saga won’t go to the graveyard until the third trigger resolves. You’ll still get the effect, and you’ll have the Saga in your hand. Pretty neat.

How does Urza’s Saga work?

We’ll talk about this particular Saga, because it’s the weirdest one, with various strange interactions.

First, it’s both an enchantment and a land. This means you can play it during your turn as your land drop for that turn. (You can’t play other lands that turn, unless you have a special effect, like Azusa, Lost but Seeking)

Second, it gains abilities which don’t go away until you lose the saga. This means you can tap Urza’s Saga for one colorless mana for as long as you have it in play.

The final powerful interaction is with its second chapter. After it resolves, you can make a Construct token, that is as big as the number of artifacts you have in play. But that’s not all! As we learned, you can respond, when chapters go on the stack. So when the last chapter goes on the stack, you can respond by paying two and tapping Urza’s Saga to get a second Construct token.

That’s a really powerful interaction to keep in mind.

How to destroy a Saga?

You can destroy Sagas with cards that destroy enchantments — for example, Naturalize. Your opponent will still get at least the first chapter’s effect. Because as we said, you can’t respond to getting a Lore counter.

If you absolutely don’t want them to get the effect, you’ll have to use discards spells (Duress) or counterspells (Absorb).

End of the Story

That’s all about MTG Saga. Again, if you have any more questions, ask us in the comments below. You can also reach us on Facebook and Instagram. We’ll gladly help you.

If you’re looking to learn more, you can check:

You can also find every Saga ever printed with this search on Gatherer (official MTG search engine).

Until next time, may Sagas win you plenty of games.