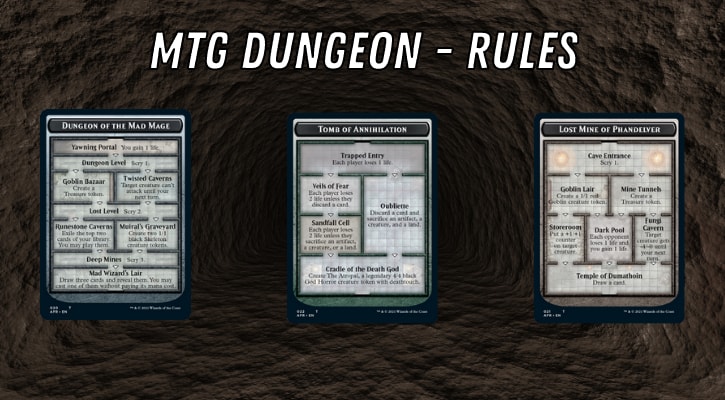 Dungeon is a new card type. It’s closely tied to the venture into the dungeon mechanic. They were both introduced in the Adventures in the Forgotten Realms set.

In this article, I’ll explain everything you need to know about this new keyword and card type, including:

How do Dungeon and Venture into the Dungeon work?

We’ll take a lot at a some examples, starting with a Dungeon card.

One example of the new card type – Dungeon, is Lost Mine of Phandelver. Dungeon cards, like this one, don’t start in your deck.

While they do start outside the game, they don’t take up Sideboard slots either. However, you can still store them with your Sideboard in a competitive game.

Dungeons are brought into the game with a new keyword action – venture into the Dungeon. This could happen as the result of a spell, activated ability, or triggered ability.

As you can see, Shortcut Seeker has a triggered ability, which triggers when it deals combat damage to a player. You get to venture into the dungeon!

How do you venture into the dungeon?

If you would venture into the Dungeon while you are not already in a Dungeon, you put a Dungeon of your choice into your Command Zone, and a marker in the top room. When you enter a room (signified by moving your marker to it), its room ability triggers. For example, entering the first room of Lost Mine of Phandelver would cause you to Scry 1.

When you’re already in a Dungeon, venturing into the dungeon causes you to move to the next room. When moving to the next room, follow the arrows shown on the card. For example, you could not move from the Goblin Lair to the Fungi Cavern in Lost mine of Phandelver.

You can’t move backwards in Dungeons, and you can’t start a new Dungeon before your old one is finished.

Dungeons are removed from your Command Zone after their final ability resolves, and are considered to be completed. Cards like Gloom Stalker have abilities that will activate in situations like this.

These cards don’t have to be under your control as a Dungeon is completed for their ability to be active. Their ability will be active as long as you’ve completed a Dungeon at any stage of the game.

Completing a Dungeon also allows you to start a new one! The next time you venture into the Dungeon, you may choose any Dungeon to enter – including the one that you have just completed, so choose carefully!

How many MTG Dungeon cards are there?

Where can I find MTG Dungeon Cards?

You can get MTG Dungeon cards in the token slots of Forgotten Realms Booster Packs, meaning that they should be cheap and easy to come by!

What if I Venture into the Dungeon in response to the final room’s ability?

In some cases, you could complete a Dungeon and then Venture into the Dungeon again before its final ability resolves.

Can you destroy a Dungeon?

No, you can’t. Dungeon card goes to the Command Zone, and you can’t interact with it.

You can interact with the venture mechanic, though. You can counter cards that would venture into the dungeon with counterspells, and you can counter abilities with cards like Stifle. However, you can’t destroy a Dungeon card.

The Flavor of Dungeons should be clear to anyone who has heard the name Dungeons and Dragons. As Forgotten Realms is a DND themed set, the Dungeon card type and Venture into the Dungeon mechanic represent the Dungeons.

We are sure to get Dragons as well!

As we’ve already talked about various interactions in previous sections, here’s just one more combo you can do with Dungeons. However, if you’ve found a special interaction, let us know in the comments below.

One of the coolest interactions with the MTG Dungeon mechanic so far is the infinite loop with Nadaar. Whenever Nadaar enters the battlefield, you can Venture into the Dungeon.

This means you get infinite Venture into the Dungeon triggers. So, you can go through the Lost Mine of Phandelver, for example, as many times as you like. Since Dark Pool room drains your opponents, you’ll be able to win – unless you mill yourself with the last room, Temple of Dumathoin.

Hopefully, you now have an advanced understanding of how Dungeons work in MTG. If you still have questions that you’d like answered, make sure to ask them in the comment section.

Planning on getting some Dungeon cards from Adventures in the Forgotten Realms? You can get a Set Booster Box on Amazon.

If you want to get more information about the DND themed Magic set, Forgotten Realms, you might like some of the following articles:

Best of luck on your adventures, and may you always roll a natural 20!