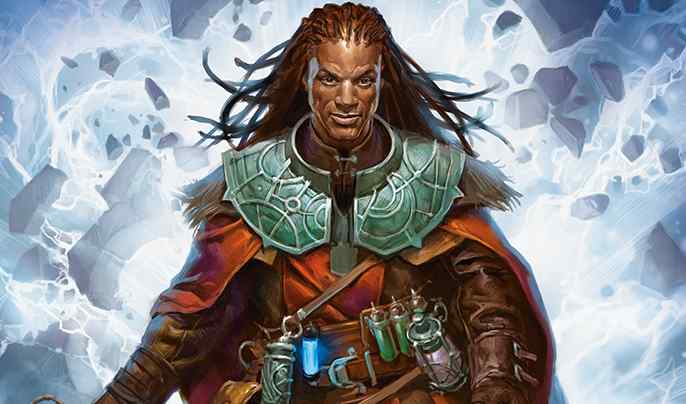 Do you want to more wins more with a great new Commander deck? We are upgrading all of the new Commander 2019 decks. We can help you make your Sevinne, Elsha or Pramikon deck stronger with our Mystic Intellect Upgrade Guide.

Each Commander 2019 deck features three different commanders. In each upgrade article, we’ll first focus on the main one – it this case Sevinne, the Chronoclasm. The other two commanders are sometimes on the same theme and sometimes not. If they aren’t we’ll also take a look at how to build around them.

We won’t just give you the exact 99-card decklist you should play. What would be fun about that? We’d rather give you interesting ideas for cards you might not know about, that would fit well in a certain shell. This way you’ll be able to pick cards according to your play-style and budget. Let’s get right into it and figure out how to upgrade the Mystic Intellect deck.

Sevinne may look like a spellslinger at first glance but that isn’t very accurate. Spellslinger is a commander which is build around casting lots of instant and sorceries. Sevinne however really wants you to cast them from a graveyard. If you do so you’ll get a nice bonus for the first one each turn. You get another copy of it!

Besides that Sevinne already has some built-in protection, which is great. Before we take a look at how to upgrade Sevinne’s deck, we’ll check the most common way to cast cards from your graveyard – with flashback. If you are an experienced player, feel free to skip the next paragraph.

How Does Flashback Work?

Flashback is one of the more simple MTG mechanics. It’s actually a keyword that appears on some instants and sorceries. It allows the player to cast this card from their graveyard for its flashback cost. Afterwards the card is exiled from the graveyard.

Let’s take a look at Mass Diminish as an example.

You want to add cards that allow you to cast more expensive cards faster. You want to have some synergistic stuff and of course – counterspells! Let’s take a look at all of those groups.

Since you’re playing a three color deck, you have to play better lands. It might not be very exciting, but it’s an important part of the Mystic Intellect upgrade. Some lands (fetchlands) can be quite expensive. No need to worry though, since other good lands were recently reprinted. You should probably add at least some of them:

Remember that all of those lands are a great Mystic Intellect upgrade, no matter which commander you’ll decide to play.

There’s also one fun combo with Sevinne. Try enchanting him with Pariah. Now every time you’re dealt damage, it’s redirected to Sevinne and the it’s prevented. You are basically immune to damage!

The combo isn’t very competitive – you can however play some ways to protect Sevinne from removal spells and this can make things quite annoying for your opponents.

With so many amazing cards to add it might be hard to decide which cards to remove from Mystic Intellect deck. We’ll take a look at off-theme cards. Cards that might good in the right shell, but not in a Sevinne deck.

The other group of cards are the ones that are simply too weak. No matter the synergy, cards like Pristine Skywise have no place in a good Commander deck.

Zetalpa, Primal Dawn is the first card that feels totally out of place. What is this 8-mana Dinosaur doing in a spells-matter deck? We don’t have any idea. Remove it and add it to your ramp Dino deck.

Pristine Angel is similar to Zetalpa in a way that it doesn’t have much synergy with the deck. Yes, it can be hard to remove, but 4/4 flyer really isn’t doing anything this deck wants to do.

Gerrard, Weatherlight Hero is a hero from the very early days of Magic the Gathering. As such he does not want to live in anybody’s shadow. He doesn’t work well with any of the main Mystic Intellect commanders. His card is powerful and should be a nice build-around commander, but he doesn’t fit in this particular deck.

Here are some examples of bad cards, which probably shouldn’t be in your deck:

Elsha of the Infinite Upgrade

Now that’s a spellslinger! And even better – you can cast any non-creature, non-land card with her. Elsha certainly isn’t messing around. Build it correctly and you can do some crazy stuff with her.

Top of the Deck Manipulation

If you want to add one single card to your Elsha deck it should definitely be Sensei’s Divining Top. It provides great ability to manipulate the top of you deck, so you’ll be able to cast a lot of cards with Elsha.

Soothsaying is another similar card, although much weaker. Cards like Enlightened Tutor and Mystical Tutor also become much stronger with Elsha in play, since you can cast the card you searched for immediately.

Card draw also changes the top of your deck. You already have some cheap card draw in Brainstorm, Faithless Looting, etc. You might want to add Prordain and Opt.

Narset, Parter of Veils is also very good – providing both card advantage and serious problems for some kind of decks.

Artifacts that tap for mana are also castable with Elsha. Besides Signets which we mentioned before, you should probably add some of the following:

If you’ll be playing enough of them, card like Dramatic Reversal also become playable – they can net you lots of mana.

You prepared the top of your deck, you have all the mana you want. Now it’s time to win the game! There are two most obvious ways to win a game with Elsha.

You play Aetherflux Reservoir and then cast a bunch of spells. You gain so much life that you can easily pay 50 life to destroy a player. Of course, you might not draw the Resovair, that’s why you also want to play cards like Whir of Invention – which is basically a second copy of your win con.

We’re talking about Approach of the Second Sun. With enough mana and deck manipulation, you can cast it two times in the same turn and win the game of the spot. Maybe not the most flashy, but it gets the job done.

Pramikon is certainly different if nothing else. If you want to play it, you probably aren’t the type of a player who really really wants to win every game. You want to win at your own rules and in style at your multiplayer game. This is what we’ll be focusing on with Pramikon deck upgrade.

Winning with attacking is boring. No need for anybody to win this way. You’ll make sure nobody will be able to attack.

You’ll definitely want to play Mystic Barrier. Then you can choose left for Pramikon and right for Mystic Barrier – nobody will be able to attack. Finally some peace at the Commander table! Same thing can also be done with Spark Double copying your legendary wall. You can also blink it with Deadeye Navigator – and change left with right between turns, this way you’ll be safe from attacks.

If this somehow doesn’t work. You can make your opponents pay for attacking – literally with these cards:

You still want to win the game at some point, right? One very unstable way of winning the game is with Azor’s Elocutors. It’s slow, easily disrupted but it’s going to be insanely fun when you pull it off. At least for you, of course – maybe not for the whole playgroup.

You can win more reliably with Approach of the Second Sun. Just cast it twice, how hard can it be when players can’t attack?

If you want to play Pramikon, maybe you just want to annoy people a little bit. Some people say that fun is a zero-sum game – the less fun they’re having, the more fun you have! If that’s the case here are some annoying commander cards in red-white-blue:

We hope that Mystic Intellect Upgrade Guide was helpful to you. With so many cards in Magic we certainly missed some crazy combos you can do with these commanders. Tell us about them in the comments bellow!

If you like Mystic Intellect deck, you can get one on Amazon.

Maybe you want to build your deck entirely by yourself. If that’s so you might want to check our tips for deckbuilding.

Anyways that’s all for now – until next time, may you flashback a lot of spells with Sevinne, go infinite with Elsha and mess everybody’s plans with Pramikon.