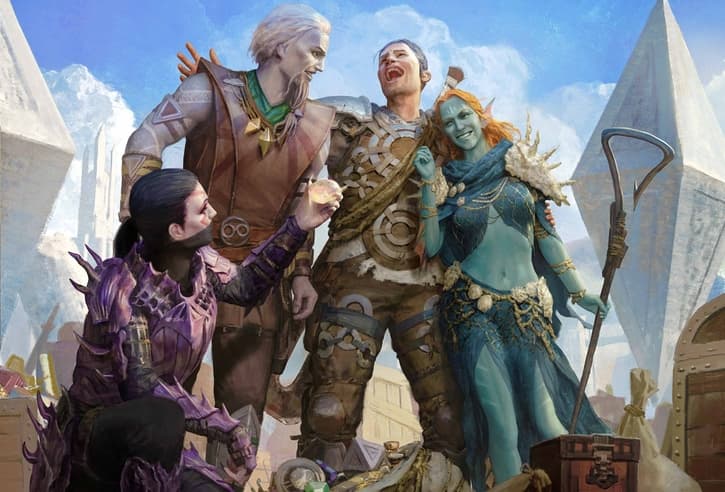 I’ve been reading how so many players don’t like the Party mechanic for the new Zendikar Rising set. While I’m not sure about Standard, I can see this mechanic being very useful for Commander, where it can be easier to summon and revive creatures. So today I’ll talk about everything regarding Party in Commander.

The Party mechanic counts if you have a Cleric, Rogue, Warrior, and/or Wizard. It gives you bonuses depending on how many of the four creature types you have. This is interesting since you can’t go full tribal but instead must mix multiple tribes into a functioning deck.

The new set will have tons of creatures for these kinds of decks, but what about the creatures that are already available?

Tazri, Beacon of Unity is the dedicated Commander for the Party mechanic and honestly not many Commanders will be better than her. Personally I would run Kenrith, the Returned King for a Party deck since he is five colors and his ability to return creatures from the graveyard will really help with this kind of deck.

You can also go 3-4 colors by using Partner Commanders such as Ludevic, Necro-Alchemist and Ikra Shidiqi, the Usurper. If you want to go this route look at Commander Legends spoilers since they’ll have new Partner Commanders.

I also like Marchesa, the Black Rose as a Commander since she is a Wizard and helps protect your creatures from board wipes, the main weakness for a Party deck. There are some good Grixis creatures in Zendikar Rising that use the Party mechanic, such as Zagras, Thief of Heartbeats.

Creature Types for Party in Commander

Let’s take a look at all four creature types (plus a bonus one) and see which cards you might include in your Commander Party deck.

I love Cleric decks. Angus Mackenzie is great since being able to fog repeatedly will help with protecting you as you gather creatures. Clerics are also great for having Protection, Auriok Champion being one of the best. Ayli, Eternal Pilgrim is great if you have creature tokens to sacrifice.

Liliana, Heretical Healer is good even though she’ll stop being a creature eventually. At least she’ll count as a Cleric until a creature dies.

Mangara, the Diplomat is such a powerful card and perfect for this kind of deck. Mikaeus, the Unhallowed is also great if you don’t have a lot of human creatures.

Of all the new Clerics in Zendikar Rising, Angel of Destiny was the main one to draw my attention. Being able to instantly kill opponents is such an amazing ability, and for only five mana!

Zendikar Rising has the Sneak Attack prebuilt Commander Deck and honestly it has a great set of Rogues. Some of my top picks from there are:

Oona is especially great as a Wizard that makes Rogue tokens.

I have no idea why they didn’t include my favorite rogue in that prebuilt deck! Thada Adel, Acquisitor is amazing at stealing artifacts and dealing damage. Personally I love using her to steal artifacts that generate mana. Nothing screams power play like stealing a Mana Crypt.

I do enjoy Edric, Spymaster of Trest, since he persuades your opponents to attack each other instead of you. You do have a risk of them drawing tons of cards and using those against you though. I’d say he’s worth the risk since he will draw you cards too. Besides, there are tons of Rogues and Wizards that focus on avoiding blockers for combat damage.

Gwafa Hazid, Profiteer is a good pick to help manipulate the battlefield. You can stop attackers or eliminate annoying blockers.

A pricier option is Bitterblossom, since it creates Rogue tokens. It will help you not only with tons of flying creatures, but also in helping you recover from board wipes.

You can also include Notorious Throng since it not only creates Rogue tokens, but if you dealt combat damage with a Rogue this turn, it gets you an extra turn! Such an important card for Rogue decks.

Of the new Zendikar Rising Rogues, Nimble Trapfinder was my main pick. He can’t be blocked as long as you played a Party creature, and if you have a full party all of your creatures can draw you cards when they deal combat damage to a player! Since so many of these cards make tokens this can draw you a new hand if you’re lucky.

Alesha, Who Smiles at Death and Najeela, the Blade-Blossom are both famously used Warrior Commanders. Alesha only works if you have enough low power creatures in your deck, but Najeela is great for any five color deck. Even if you don’t have a lot of warriors, her activated ability can easily end games in your favor.

Some other great fits are:

Each one is very powerful by themselves and can fit into a deck not focused on Warriors.

Nath of the Gilt-Leaf is one of the rare Warriors that helps with control. He makes Warrior tokens and makes your opponents discard cards at random, both abilities are perfect for Commander.

Winota, Joiner of Forces can also be a great fit if you have a good mix of humans and non-humans. If you include tons of cards that create non-human tokens and include a good number of human creatures, she would be a great fit for your deck. She’s powerful but you have to completely build around her.

Squad Commander is amazing if you can get a full party. Being able to attack with Indestructible creatures each combat can easily decimate your opponents over time, especially if you can gain Vigilance. Easily one of my first picks for new Warriors in Zendikar Rising.

I feel finding good Wizards for this deck is one of the harder of the creature types, since so many Wizards focus on helping only Wizards or focusing on Instant spells. Barrin, Tolarian Archmage is good for bouncing permanents, and Braids, Conjurer Adept can be worth the gamble if you have high cost creatures to cheat out. Sen Triplets is great for preventing your spells from being countered as well as stealing your opponents’ spells.

Ertai, Wizard Adept is great if you want more control. Just having the extra mana and Ertai untapped can help you manipulate players and their plays.

I love Endrek Sahr, Master Breeder for this style of deck. He is a Wizard, and he’ll make tokens that can be sacrificed to your other effects. Several Clerics and Warriors sacrifice creatures, and if you have graveyard recursion you can keep bringing Endrek Sahr back for more tokens. Ghoulcaller Gisa is another great Wizard for making tokens.

Once you get some creature tokens, Jalira, Master Polymorphist can start cheating out creatures from your deck. You can also use Grim Haruspex to draw cards when you sacrifice non-token creatures.

So many Rogues and Warriors require combat damage, and Kaseto, Orochi Archmage is perfect for helping them get through blockers.

So an important fact about Shapeshifters is that even though they’re all creature types, they won’t count for each creature type when counting party members. Each Shapeshifter will count as one of your choice.

That being said they’re perfect for this kind of deck. Amoeboid Changeling can count for any party member and you can tap it to make another creature count as another party member. So if you have a creature token or an extra Cleric, they can fill in your Rogue or Warrior party slot.

Here are some extremely powerful Shapeshifters that can help you finish the game:

My favorite is Chameleon Colossus, protection from black and the ability to increase in power can decimate players or just scare them even if you’re not attacking.

Unsettled Mariner will help protect your creatures. Given how this deck so heavily needs creatures on the field to work, this is especially important. You can also use Graveshifter to return dead creatures to your hand.

Certain Changelings such as Changeling Titan have the Champion ability, which can be useful to protect yourself from board wipes. Let’s say you have two Clerics, and you Champion one of them. When someone wipes the board, you get that championed Cleric back and are now closer to rebuilding.

Irregular Cohort is also an interesting card. It immediately creates two creatures that can count for any party classes.

Party in Commander – Cards for the 99

Outlaws’ Merriment is an amazing card for this deck since it will randomly create a Warrior, Cleric, or Rogue for you. While the randomness can be annoying sometimes, it’ll help you recover from board wipes.

Westvale Abbey will also create Cleric tokens. You can respond to a board wipe by sacrificing your creatures to create an Indestructible Demon, or even threaten your opponents into not wiping the board.

God-Eternal Oketra makes Warrior tokens, and can keep bringing itself back from the dead so she’s a great fit for this deck. Oketra the True is similar, but I prefer the God-Eternal since you don’t have to spend mana to create the tokens. Heliod, God of the Sun also creates Cleric tokens, and even if he also costs mana to do so, he is harder to kill and gives vigilance so he is a great fit for many decks.

If you have a decent number of red or green instant and sorcery cards, you can add Wort, the Raidmother. Being able to copy spells and creating two Warrior tokens are very useful, but her high mana cost can hurt your mana curve.

For cards using the Party mechanic, Spoils of Adventure was the first card that truly caught my attention. Linvala, Shield of Sea Gate was another one. I love that not only does she have a powerful Party ability, but you can also sacrifice her to protect your creatures.

There are some creatures from Zendikar Rising built to help Party decks. Veteran Adventurer, Tajuru Paragon, and Stonework Packbeast are all built to count as any Party creature type, helping you with triggering Party abilities.

I’m a big Dungeons and Dragons fan so I’m loving the Party mechanic both for function and flavor. I’m super excited for these new cards coming out. I personally love the idea of building a Party deck and also a Cleric Tribal deck when Zendikar Rising comes out.

Here are some other articles that you might enjoy:

Between Clerics, Rogues, Warriors, and Wizards do you have a favorite creature type? Any favorite creatures I didn’t mention? Please leave a comment below and let us know how you approach building Party in Commander.

You can also follow us on Facebook or Instagram for more detailed decklists in the future. Every good Dungeon Master can tell you how difficult it can be to keep your party alive, so good luck! And don’t split the party!