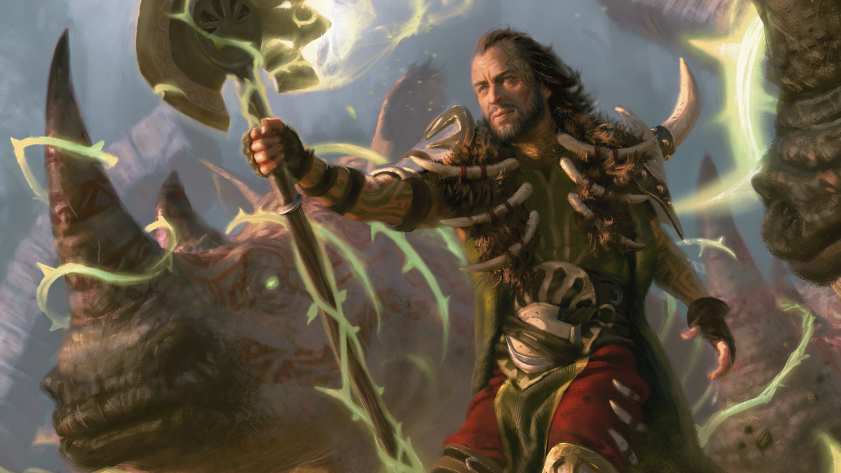 Do you want to win more Commander games with a cool new deck? We’ll take a look at the newest Commander 2019 decks. If you want to play Ghired, Atla Palani or Marisi – we can help you make them even better with our Primal Genesis Upgrade Guide.

Each Commander 2019 deck features three different commanders. In each upgrade article, we’ll first focus on the main one – it this case Ghired, Conclave Exile. Other two commanders are sometimes on the same theme, if they aren’t we’ll also take a look at how to build around them.

We won’t tell you the exact decklist you should build. Where’s the fun in that? Instead we’ll give you interesting ideas for cards to add and which to remove. So let’s take a look at how to upgrade Primal Genesis deck.

Ghired focuses on making big tokens. If you want to build around him, you should probably follow along with it. That means removing cards that work in their one specific direction which is totally different from Ghired. For example Tectonic Hellion doesn’t make any sense in this deck.

You’ll want to add some cards that can produce big tokens, not necessarily a bunch of small ones. If you want to build a deck with lots of small tokens, Rhys the Redeemed would probably be a better choice.

Some cards should be added based on the synergy with Ghired. Here are some examples:

Furthermore there are cards that are so good that even though they don’t have a synergy, they should be in your deck. It doesn’t matter if you’re building Ghired, Atla or Marisi, this strong cards will make your deck better:

Finally let’s take a look at the mana base. This part is probably less interesting upgrade but it will help you win more games.

As for utility lands, you should definitely add Grove of the Guardian. It has nice synergy with Ghired. You could also play Gavony Township and Kessig Wolf Run but be careful so you don’t play too many lands that don’t provide colored mana.

Excluding Grove of the Guardian this is more of a general Primal Genesis upgrade. These cards should also be added to other two decks – Atla and Marisi.

When considering which card to remove form the Primal Genesis deck, you should consider the following two criteria. Firstly, removing cards that aren’t on theme. Of course, if a card is just powerful, is should remain in your deck. Then you should cut the cards that are too weak for their mana cost. Let’s take a look at both groups.

Cards can sometimes be on theme, but still be too weak to earn a slot in your deck. A prime example is Trostani’s Judgement. It exiles a creature and makes a token. What’s not to like? Well, it’s casting cost is just too high. You could easily play Swords to Plowshares. Yes, it has a downside and doesn’t come with a token – but it’s five mana cheaper. You shouldn’t ignore that kind of difference in efficiency.

Some examples of other weak cards in Primal Gensis deck:

Second commander from Primal Genesis Atla Palani is quite different from Ghired. She doesn’t care much about tokens. She just wants to hatch a really big creature. Maybe Zacama, Primal Calamity for flavor win?

When building around Atla your deck should have the following:

There is a lot of big creatures in Magic the Gathering. Here are some you might like:

Cards like Aurelia are particularly interesting since they untap your creatures. That means you can activate Atla Palani again and get another Egg. And there are ways to hatch it immediately.

Those cards are great for hatching eggs. (Now this is probably a brand new sentence.)

We really like Altar the most of these. It provides free outlet and also nets you two mana. If you’ll only add one card to your Atla Palani deck, this one is the best choice for a great upgrade.

This card isn’t a sacrifice outlet but it combos very nicely with Atla Palani. We’re talking about Shields of Velis Vel. It’s a niche effect, however it’s quite strong if you have Atla in play.

Imagine your opponent playing a mass removal spell. You respond with Shields, turning all of your stuff into… Eggs! Everything dies and you get as many creatures from your deck as you had before.

It also works very well with sacrifice outlets. You can turn all your weaker creatures into eggs and then sacrifice them – for insane value!

Sometimes you won’t get Atla to work, somtimes she’ll die and sometimes you’ll draw the big creatures. That’s why important to have mana generators or ramp in your deck.

Previously mentioned Altar is great as it’s on the double duty as both sacrifice outlet and mana provider. Here are some other good ramp cards:

You should probably avoid cheap ramp creatures such as Birds of Paradise or Sakura Tribe Elder. You don’t really want to hatch those with Atla.

Marisi, Breaker of the Coil Upgrade

Goad is possibly one of the most underrated abilities in Commander. Players often play creatures for their abilities and not their strength in combat. Sometimes they just want to play defensively and hide behind their creatures. That plan won’t work anymore. You just have to hit them with one creature and they will have to attack with everything. As such Marisi is great for those who hate four hour long games.

It’s worth noting that goaded creatures can’t attack your planeswalkers. That means that it might be a good idea to play more planeswalkers than you usually would.

There are plenty of cards with nice synergy with Marisi:

Don’t forget to take a look at previously mentioned good stuff cards and lands to add. They will function well in both Ghired deck and in Marisi.

We hope that our Primal Genesis Upgrade Guide was helpful to you. If you know some other insane combos and modifications, let us know in the comments bellow. This way you’ll also help newer players, who are just starting with commander.

If you consider buying the deck, you can check its price here.

If you want to build your deck from a scratch you might want to take a look at 9 Tips for Better Deckbuilding. For all of those who just can’t wait for new MTG cards make sure to bookmark our Throne of Eldraine Guide – all known information about newest Magic set is gathered there.

That’s all for today – until next time, may you make the biggest token with Ghired, hatch a bunch of Eldrazi with Atla and make your opponents angry with Marisi.