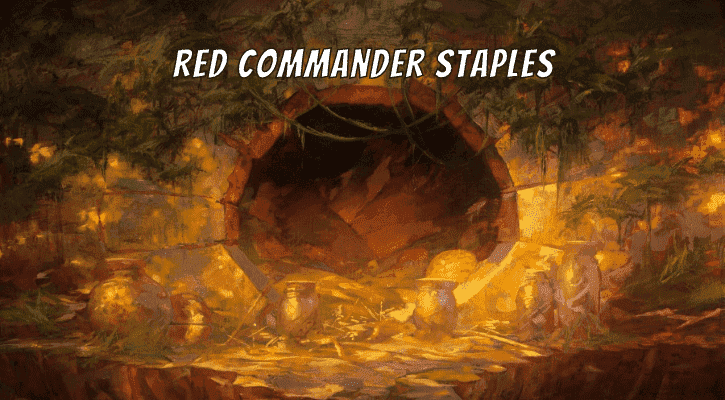 Here’s a quick overview of the best Red Commander staples. The list is by no means a definitive one, but it includes most of the best Red cards in my opinion. Each one of these cards has generic utility, and therefore they show up in a lot of Red decks.

In each category, I’ll talk about some great Red cards specifically, and list most of the relevant cards in that category. Let’s get to it.

Red is often known for having small, aggressive creatures in other formats. In Commander, the creatures serve a slightly different purpose. Most of them are either utility creatures or scale phenomenally well in multiplayer.

For example, Imperial Recruiter is a valuable tutor. It can even search up some of the other creature staples from your deck, like Dockside Extortionist. Speaking of, the Extortionist and Magus of the Wheel are both staples because they offer Red something that Red typically doesn’t have, namely ramp and card draw respectively.

Krenko and Purphoros, however, fall into the other category. They are creatures that scale well into multiplayer. Purphoros can deal tons of damage in a short period of time. Best of all, he hits each player equally, so you do not have to worry about one of Red’s typical weaknesses: only being able to beat one player at a time.

Typically, Red instants come in the form of burn spells. In Commander, however, burn decks struggle to get enough damage across with Lightning Bolts. For this reason, Red instants serve a different purpose in Commander.

If an instant is going to be a removal spell, it will probably be Chaos Warp in a Red Commander deck. In fact, that might be the only instant speed removal spell that winds up on this list.

Most of the time, Red instants are Fork effects. As you see from this very succinct list, there are two cards that do that kind of thing. Red is full of other versions of that same effect, however, and many Red decks run them.

Other than that, a Red staples bring a powerful utility effect. Deflecting Swat is a new card that could arguably go in any Red deck to protect your commander or other important creatures. Valakut Awakening on the other hand, gives you an opportunity to see a bunch of new cards, which is something that Red decks value highly.

Most of the time, Red sorcery staples are board wipes. Blasphemous Act and Hour of Devastation are listed here, but they represent a lot of board wipes that could just as easily found a home on this list.

Another common kind of Red sorcery is something like Wheel of Fortune. In fact, Wheel of Fortune is so iconic that all cards that do something similar are called ‘wheels’. There are many iterations of this effect. Each one basically makes everyone discard their hand and draw 7 cards.

There are also Red Commander staples that are neither board wipes nor wheel effects. You have Faithless Looting, which draws cards, Gamble, which is one of Red’s best tutors, Mana Geyser, which could be considered ramp, and Vandalblast, which blows up artifacts. Each of these cards have generically useful abilities, landing them slots in a lot of Red decks.

On this list, Fiery Emancipation represents a long list of mostly enchantments that multiply damage dealt. Most of them, like Dictate of the Twin Gods and Furnace of Rath simply double the damage. Emancipation, however, is a one of very few cards that triple the damage.

Mirror March, Flameshadow Conjuring, and Molten Echoes are all enchantment staples that create copies of creatures when they enter the battlefield.

This is a type of Red enchantment that has become more and more common. Outpost Siege was among the first enchantments to have this kind of ability. It has been joined recently, though, by cards like Stolen Strategy, Valakut Exploration, and Vance’s Blasting Cannons.

Finally, there are a lot of enchantments with unique abilities that are so good, many Red decks run them. Examples of these are Sneak Attack, Goblin Bombardment, Impact Tremors, and Underworld Breach.

Although the number of Red artifact decks is pretty high, there are not very many specifically Red artifacts that I would consider staples. I included Gauntlet of Might even though it is not technically Red.

Red is not known for being a great superfriends color. Because of this, the only two Red planeswalkers that I would consider to be staples would be the following two:

These two are the only ones that have enough generic utility to be considered most Red decks. If you’re building a Red deck focused on artifacts, Daretti, Scrap Savant could also be considered a staple.

Like Planeswalkers, there are not a lot of utility Red lands that are staples. Most Red decks could get away with running all Mountains. However, here are a couple of non-Mountains that many people would consider when building Red decks:

If you aren’t the biggest fan of so many staples, and you want to learn how to use fewer staples in your decks, check out my other articles about problems with Commander Staples.

Furthermore, if you’re looking for a new Commander deck, but don’t want to go through the hassle of building it, you should check this list of all Commander precons. Finally, for a full list of the most commonly played Red cards in Commander, check out Edhrec’s Top Red Cards page.