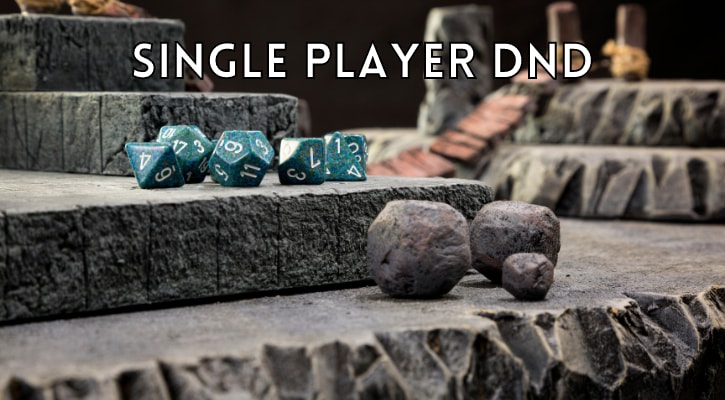 It may seem odd to run a single player Dungeons and Dragons game, but it is something many people have worked on. Maybe you’re teaching yourself how to play, or you want to test out character strategies.

I’ve found it is pretty common for those with social anxiety to want to test a system before joining other players because they’re scared of bullies or gatekeepers being mad if they make a mistake. Whatever the reason it is possible to play single player DND with the right materials.

Premade adventures are going to be your easiest option. You can find those officially made by Wizards of the Coast (the creators of Dungeons and Dragons) at DND Beyond. Check for campaign books that have premade questlines that specify what enemies and loot you’ll get. Also check each book since they’ll list what levels and how many characters will be needed to play them.

You can also look through DriveThruRPG but this site contains fan made adventures for many types of games, not just Dungeons and Dragons. It is fun to search for ideas but the DNDBeyond site is your best option for balanced adventures. Once you have more experience I highly recommend DriveThruRPG.

If you have a strong imagination and want something more creative than following a premade adventure, you can use the Mythic Game Master emulator to make random adventures. Mythic Game Master has a version that is a game neutral emulator, so it doesn’t use specific Dungeons and Dragons rules. This is good if you want to try Pathfinder or another game.

The emulator is going to need help with some other items but it does an amazing job of allowing random adventures. You’re also going to need:

The emulator works with you deciding how the tables work. If you have a yes or no question there is tables for that. So maybe you made four characters, you can use the tables to decide on whose story to focus on first.

Another example of how the Emulator helps is you’re thinking the mayor of a town might be a villain. There are different tables if you think it is likely or unlikely with different degrees of probability. The game also uses a Chaos score that can change with different rolls and can affect the probability and tables used for rolls.

If you want to see Mythic Game Master Emulator in action, watch The College of Lore Roleplaying use it:

They have two players but the same tools that they use can be used for one player. They also have banter that help explain how the Emulator works, which is good since that’s how your mind would have to think about each encounter for the Emulator to work.

You’re going to need encounter generators to decide what monsters you’ll face. Some of my favorites will help you decide biomes as well, such as only showing monsters that can only be found in a tundra or swamp.

The important aspect of these generators is that you can put the number of characters and their levels, and it’ll calculate encounters with difficulty levels. So if you’re learning you can have Easy or Medium encounters. Once you gain experience you can eventually move to Hard or Deadly encounters to truly test your strategy skills.

These generators will have you answer questions, then offer options for encounters with difficulty levels. So many it’ll say 6 Skeletons is easy, and a Minotaur is hard. You can then role a dice or pick an encounter that you feel fits the story you’re going for.

Mythic Game Master is very good at random stories, but the Donjon site also has options if you want more ideas. If you buy source books for Dungeons and Dragons (such as the Eberron or Ravnica setting books), they also usually include random quest and story generators. I’m not 100% sure if all the setting books have this so you should do your research first.

An example of the setting books, the Guildmaster’s Guide to Ravnica book has tables for quests and villains depending on which faction your characters join.

You can also use the Xanathar book to generate backstories for your characters and use those for ideas on the story. If one character is looking for their partner, you can just say they’re going into this dungeon to find info, or maybe find an item to trade for information.

For random maps, my go to has always been Donjon’s random dungeon generator. There are tons of options for details such as size, floors, and how many dead ends you want.

Other Options for that D&D Itch

If you are craving a Dungeons and Dragons game but don’t want to go through prep work, there are tons of games you can play. Most people would say play video games such as the Baldur’s Gate trilogy, but if your computer isn’t built for gaming I have a couple board games that will help you play your favorite RPG.

Expedition Game is one of my favorite games for 1-2 players (but you can play with up to 6). You download the app on your phone or tablet, and use it to run a Choose Your Own Adventure style story. The game also includes a dice and cards to handle combat.

You build a character out of ability cards, and have cards that represent the monsters you fight. You can also go on their website and learn how to create your own quests! I’ve created a couple quests, and have won two of the quest writing contests that the creators have occasionally. I love this game.

There are tons of official Dungeons and Dragons board games that have simplified versions of the normal rules. They are fun, but can be pricy with the amazing figurines included with each one. These four say that they are playable for one player. There are other games but they are meant for 2 or more players.

Explore the cave, which leads to a maze of tunnels and chambers – deep insides lurks the red dragon Ashardalon. This board game has multiple scenarios and challenging quests. Enables single player DND experience, but can support up to five players.

The master of Ravenloft is having guests for dinner – and you’re invited!

However, evil lurks in the towers and dungeons of castle Ravenloft, so make sure that you’re exceptionally brave before you start this campaign. You’ll get a choice of a hero: a ranger, rogue, warrior, cleric or wizard. You can expect more traditional DND stuff – exploring the dungeon, fighting the monsters, leveling your skills etc.

While the game is more fun with multiple players, you can also play the single player campaign.

Dungeon of the Mad Mage

In the city of Waterdeep, there’s a tavern called the Yawning Portal. Why is it called that? Because there’s a gaping pit in its common room. At its bottom is a labyrinth dungeon Undermountain. It’s the domain of the mad wizard Halaster Blackcloak, who has secured his lair with various monsters, traps, and mysteries.

In this board game you’ll try to explore the Undermountain dungeon to find the treasures, while hopefully staying alive.

The gameplay is designed for a single player experience, but it also enables 2-5 player cooperative gameplay.

The Legend of Drizzt

Another game that’s design for 1-5 players. It features multiple scenarios, quests and possibility for a cooperative gameplay, while also having a single player mode.

You’ll explore the game world by laying out tiles and using already made player characters. You can also expect enemies, which are represented by corresponding miniatures.

That’s aIl about single player DND. Since I don’t have that much experience with single player campaigns, please share your experiences below! Also if you can recommend any board or video games for RPG fans let us know!

Anyways, have fun with your single player DND campaign!