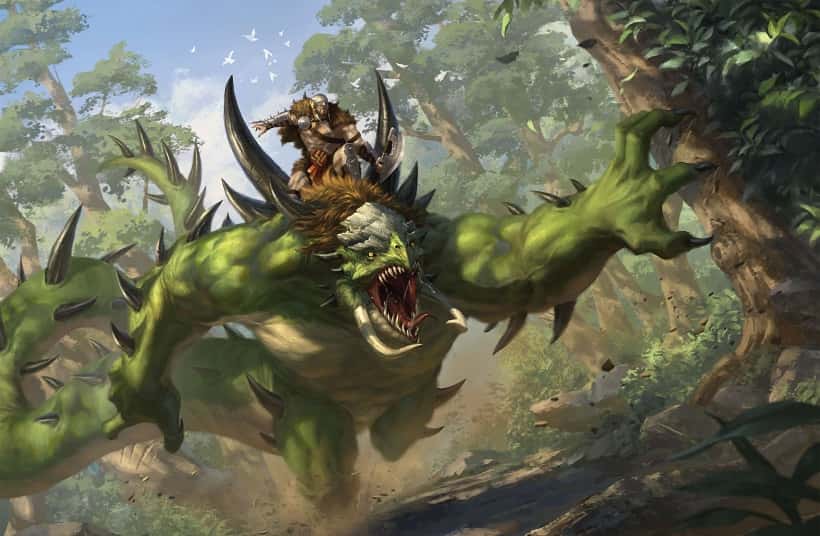 Hello friends and fellow planeswalkers! With Standard rotation coming soon, Wizards of the Coast has given us a new ranked queue called Standard 2021 to practice and innovate new decklists in.

Players may only use cards from Throne of Eldraine and forward to build their decks. This is temporary of course, for as soon as rotation happens the Standard 2021 queue simply becomes the new Standard.

However, until then players from around the world are trying to solve this new format. We are trying to figure out what decks and cards are most powerful within the smaller card pool. Many new and innovative decks have been discovered, and these are the highlights (Some of these lists include sideboards, but the Standard 2021 queue is currently best-of-one.)

The decks are sorted into the following three tiers. However, they will be in no particular order within their respective tiers:

This deck is extremely well positioned in the metagame. It has an extremely resilient and recursive threat in Uro, Titan of Nature’s Wrath, as well as a monstrous late game card in Ugin, the Spirit Dragon.

No matter your opponent’s board, a resolved Ugin virtually guarantees the win. Jolrael, Mwonvuli Recluse and Uro can create blockers till then. Uro gains life as well, which hurts aggro decks immensely.

Elder Gargaroth is also a great card in this deck. It gives you a way to pressure your opponents, while still being available as a blocker due to vigilance.

This deck is incredibly versatile and doesn’t have many bad matchups, thus making it a very viable choice for laddering.

Due to being a tempo deck, it has enough creature removal to keep aggro decks like Mono Red at bay. On the Other hand it still has enough counterspells and on-board pressure to attack slower decks like Simic Ramp. While you may end up with the wrong half of your deck sometimes, you have full playsets of Opt and Crash Through to be able to find the spells you need.

The only reason this type of deck has struggled in the past was the low threat count. This was first mitigated with Ikoria and Sprite Dragon. The other great card this deck got recently is the powerful Stormwing Entity.

This deck can easily get the cost reduction on Stormwing Entity. This let’s you get a huge 3/3 prowess creature on the field as early as turn 3. And it sets up your next draws! It makes Blue-Red Spells a force to be reckoned with, due to the increased consistency and threat density now present in the deck.

This deck shines because of the great card quality it has (green got many good cards in the last year). It’s also especially good as it does not have any issues with its mana base. This means it can reliably cast its spells on time in a shockland-less format.

The cheap and efficient ramp in this deck, as well as the threat density, means that it can easily fight through any removal or counterspell an opponent may throw at you. Additionally, the top end creatures are so powerful that a single one can win the game just by itself.

This puts opponents in a hard spot, as they are forced to have an answer to every single threat we present. They’ll often run out of answers, due to this being a best-of-one format.

This deck was close to tier 1, but it had a couple weaknesses that made it fall down a tier.

First off, the manabase of this deck is too rocky. It really wants to cast its payoff as early as possible, and taplands slow you down a whole turn. This can be devastating against decks like Simic Ramp. You give them a whole turn to set up the resources they need to cast huge spells.

Furthermore, this deck does not have enough interaction. If additional interaction and protection spells were added to the deck, it would dilute the synergies too much. Additionally. this deck is extremely mana hungry, and so it cannot waste mana in the early turns.

With the current card pool, interaction is necessary as players pack many removal spells to deal with your payoffs. They also have their own spells that cannot resolve/remain on the battlefield for us to win.

Nonetheless, this deck remains in tier 2 and not tier 3. If the opponent for any reason cannot interact with you enough, your payoffs can easily snowball to kill your opponent.

Additionally, if the game goes long and they do not interact with your graveyard (which is likely as maindeck graveyard hate is not very conventional) you can just win out of nowhere with a massive Zenith Flare.

This deck is certainly powerful, but is just a little too much of a glass cannon to be deemed as tier 1.

These Knight decks can have some really good games… but also some pretty bad ones. The mana base is still a little too clunky for an aggro deck, even if it’s just two colors. You really need to get your spells down in the early turns. Red-Black version is a little better than Red-White Knights due to this as it survives the mid game a little better, but the difference here is minimal.

Knights aren’t a weak choice at all, as the synergy is quite high and can create huge amounts of value. The issue is that the slight dip in consistency these decks have is not worth the synergy they create.

The card quality of decks like Mono Green Stompy is sometimes good enough against the synergy of the Knights decks. Besides, Mono Green is also more consistent due to the mana base.

This deck can be extremely powerful and make some wild games of Magic. While it is not consistent enough to be considered tier 1, it is still quite powerful.

It needs Winota to be powerful enough to beat the other tier 1 decks. Without her the deck becomes a subpar Red-White Aggro deck. Consistency is the name of the game in this format. So the fact that we don’t have any tutors for Winota means that this deck sometimes just doesn’t work.

Like the other aggro decks in tier 2, Boros Winota also has a mana base issue. However, this deck mainly cares about our mana base on turn 4, when you want to cast Winota. By then, any Temple of Triumph will optimally have already been played on earlier turns. This makes the mana base slightly more comfortable.

The good news with this deck is that even without Winota, the game is not lost. Cards like Haktos the Unscarred and Alpine Houndmaster can win us games. However, their power level just doesn’t match up to the threats in tier 1 decks.

This deck can get absurd amounts of value, but it still heavily relies on Edgewall Innkeeper. While the Innkeeper doesn’t make or break this deck’s game plan, it’s instrumental in beating tier 1 decks.

The deck just becomes a Gruul midrange deck without Innkeeper. Midrange is not great in this format due to Ramp decks being able to outclass them easily, so this deck narrowly misses the tier 1 spot.

Should the metagame change to a point where ramp is less viable, this deck would take the tier 1 status. Nevertheless, Red-Green Adventures cannot ascend tiers until Blue-Green loses its incredible ramp.

Notwithstanding its weakness to ramp, this is quite a powerful 2 color deck. Its mana base doesn’t hinder it too much. The deck can easily switch between aggro and midrange game plans, making it quite versatile.

Sadly, Mono Red Aggro loses too many spells in the Standard 2021 card pool to be very competitive.

This deck really needs cards like Runaway Steam-Kin and Light Up the Stage to generate enough card and mana advantage to challenge other tier 1-2 decks. Mono red decks become too underwhelming and slow by losing these cards.

Mono Red is such an aggressive deck that it must not lose steam until the opponent is dead. This version can end up with an empty hand quite easily without Light Up the Stage to continue drawing threats.

Without Runaway Steam-Kin, the problem is reversed in that we cannot gain enough momentum and dump enough spells from our hand to overwhelm the opponent.

Nevertheless, the deck can still pack quite a punch with the combination of small creatures, Anax, Hardened in the Forge and Embercleave.

On the other hands, the deck needs cheap value cards to create card advantage to become better. It may shift tiers if we see cards like these in Zendikar Rising.

The good thing about this deck is that it doesn’t suffer from mana bases inconsistency. However, the deck is still somewhat lackluster. Losing Ajani’s Pridemate as a powerful and cheap payoff threat greatly hurts this deck. Arena base set includes Hallowed Priest, which is essentially the same card, but it’s just a 1/1. The downside is far from insignificant.

Speaker of the Heavens also doesn’t fill this role sufficiently, as it takes too long to get to 27 life with the lifegain effects available to us. Griffin Aerie can be a good payoff card, but it is still just a 2 mana do nothing until you can consistently gain 3 life per turn.

Moreover, the deck has very minimal interaction to deal with the opponent’s game plan. You can’t include to much interaction, or you’ll dilute your synergies. This is another downside of this deck, which is already fragile.

Weak payoffs due to Standard 2021 card restrictions places this deck solidly in tier 3. It really needs another powerful lifegain benefit from Zendikar Rising. Preferably one that can be an immediate board presence by turn 2 or 3 at the latest.

Standard 2021 is an exciting new format for us with new builds appearing every day. I am sure that the metagame will be shifting greatly over the course of the next couple months, and I hope that you are all as excited as I am.

Furthermore, it is important to understand that these tier lists are based off my analysis and opinion. These are not to be taken as pure fact, but as what the metagame currently looks like theoretically.

You can also check my stream on Twitch. I go by complexartichoke, and I regularly stream budget decks for Standard and Historic on Arena. These decks are both practical and competitive. In addition, I also occasionally stream MTGO and more expensive competitive decks. So if you enjoy crushing your opponents on a budget, make sure to give me a follow! You can also check out my Instagram @tanmay_illusions.

Furthermore, if you don’t want to miss new decks, give Card Game Base a follow on Facebook or Instagram. You’ll find reminders for articles, Daily Deals on Arena, some Magic memes and codes for Arena. Speaking of which, you can find all currently available MTGA codes here.

In case you can’t wait for the new set, check all current info about Zendikar Rising.

Thank you all for reading, and I hope it gives you a good foundation for foraying into the world of Standard 2021. Till next time!