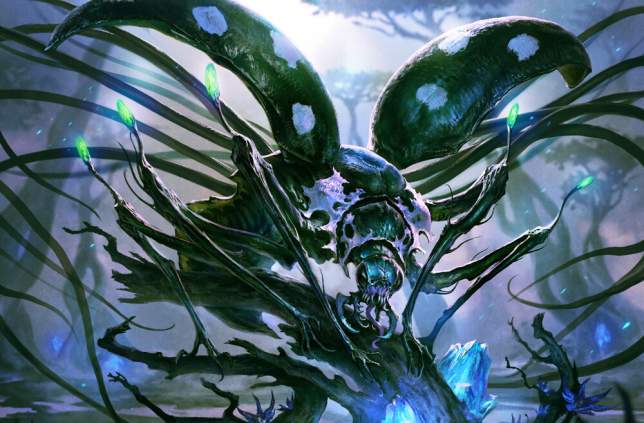 Do you want to make your Kathril, Aspect Warper deck better? We can show you how to take it to the next level with our Symbiotic Swarm Upgrade Guide.

Each Commander 2020 deck from Ikoria Lair of Behemoths, features four Legendary Creatures that can be ran as your Commander:

In this Symbiotic Swarm upgrade, we’ll be focusing on the main one – Kathril, Aspect Warper.

If you haven’t played much Commander before, we recommend shuffling up right out the box and playing with some friends. There’s no better way to get a better feel for you deck. This will allow you to decide what you like and don’t like before modifying you deck.

Maybe you’re just browsing to decide which deck from Commander 2020 you want. This guide will help you see how this deck can evolve with some upgrades. If you want one you can order Symbiotic Swarm on Amazon.

But first things first, let’s see what comes in the deck.

It’s not always easy upgrading a Commander deck, especially if you’ve never done it before. So we are going to provide some card options that you can build around; everything from synergy, powerful cards and not to mention lands that’ll work for you.

Let’s get right to it and take a look why Kathril is so good and how to exploit that!

This deck needs some upgrades, but once you modify it, you could easily run this as a Voltron deck. (Voltron decks focus on making one single creature amazingly good.) The key with this one is to dump as much creatures into the graveyard as soon as possible.

Kathril also gets +1/+1 counter for each ability counter placed on a creature or itself. So you could easily be swinging in for lethal, once Kathril is a 12/12 with double strike. Using the Commander damage rule, you can quickly win the game. (Commander damage rule: if a player takes 21 points of combat damage from a single Commander over the course of the game, they lose.)

Getting Cards in the Graveyard

The first card that comes to mind is the Hermit Druid. With this 2 mana creature, you can easily mill a quarter of your deck or more until you find a basic land!

If you’re looking for a specific creatures to get in your graveyard, there probably isn’t a better card then Buried Alive, you get to find three perfect creatures to make Kathril even better.

Protection, protection, protection. Once cards start hitting the graveyard you will need to protect it, just in case someone wants to remove it. If they do, you won’t be able to use Kathril to its fullest. You can protect your graveyard by playing Ground Seal. This 2 mana enchantment draws you a card when it enters the battlefield. But more importantly – cards in graveyards can’t be the target of spells or abilities.

Running low on gas or suffered a board wipe? Perhaps you have a Hail Mary card in your graveyard and you need it immediately. Then for 2 mana, I suggest you Reap. You can return any number of cards from your graveyard to your hand (as long as the amount of cards isn’t higher then the amount of black permanents an opponent controls). So how good it is depends on how many players in your play group are playing black. If you do manage to make it work, it can bring any key strategic cards back for the final knockout. However, don’t put both Ground Seal and cards like Reap in your deck, as that’s a nonbo.

You’ll also want to play creatures with different abilities, to make Kathril even better. Hexproof and indestructible are very important. What that in mind, here are some useful creatures you might want to add:

If your opponents are trying to overrun you with creatures or tokens, then you might want to play Damnation. For 4 mana you can clear the board by destroying all creatures, which will allow you to swing in with your hopefully indestructible Kathril.

If you don’t mind being the prime target on board and want an alternated win condtion you can play Blightsteel Colossus, for 12 mana you get a 11/11 Golem – Artifact Creature that has trample and indestructible. But more importantly infect. Who needs to whittle their opponents down from 40 life or 21 commander damage when you can kill them with 10 poison counters

A couple of other cards worth considering are Rise of the Dark Realms and Demonic Tutor.

The next stop in our Symbiotic Swarm upgrade guide is your mana base. Overall the land count is pretty good in this deck. Here are some optional dual lands that you can add if you feel that you need more consistency.

Here are some great (not too expensive) dual lands that you can add to your deck:

Removing cards is often the hardest part of upgrading the deck. The easiest thing you can do is to think of your theme, what is your deck/commander trying to accomplish? Furthermore, what cards are not helping or not doing enough? Evaluate each individual card to help determine this factor.

Here are just some suggestions of the cards you might want to remove:

That’s the end of our Symbiotic Swarm Upgrade Guide. Do you think we missed some good card that should definitely be in the Kathril, Apect Warper’s deck? Please, share your suggestions in the comments below!

Don’t want to miss another interesting Magic article? Give us a follow on Facebook or Instagram. We’ll provide Magic spoilers, news, articles and memes. Come and join us, we’ll be happy to have you.

I hope you enjoy building and smacking face with Kathril, Apect Warper.