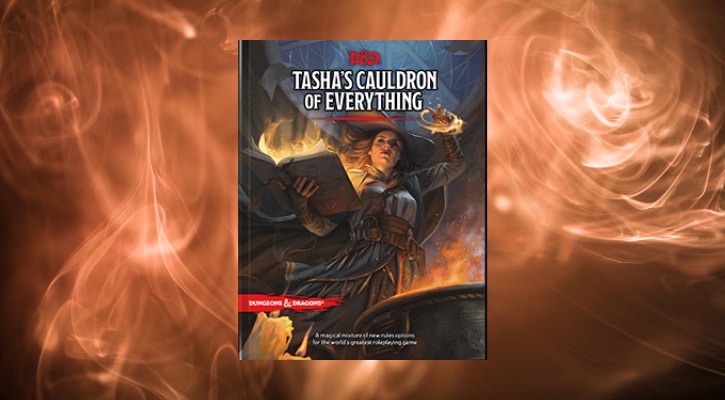 Not sure if you should buy Tasha’s Cauldron of Everything? Well, in this review I’ll talk about my favorite things the latest D&D book is bringing us. Hopefully, this will help you decide if you want to get the book or no. So let’s get to it!

The major book contents can be split into the following groups:

I’ll talk about my favorite things each of them bring to your Dungeons and Dragons table.

I’ve been excited for Tasha’s Cauldron of Everything for a while. The idea of new subclasses is something that I always love, but what drew my attention was rumors of new rules for races. Many players end up picking the race solely to boost a stat for their class, instead of a race that fits their backstory and the character they want to play.

Certain races have bonuses to stats like strength or intelligence, and it doesn’t make sense for every gnome to be more intelligent than every other race. The logic is gnome culture promotes study, but what if you’re a gnome raised by goblins? Or a goblin raised by gnomes?

Tasha’s Cauldron of Everything now allows you to switch any stat buff for an equal buff. So if you want a half-orc that isn’t as buff as a generic half-orc, you can switch your +2 strength bonus for a +2 intelligence bonus to represent you spending more time in the library instead of the gym.

There are also rules for switching a race’s skill proficiencies. So you have the option to switch certain skill / armor / weapon / tool proficiencies for others.

I really like this because it doesn’t make sense for a dwarf to know how to use medium armor if you’re picking a class that makes you weaker if you use heavy armor. So a dwarf monk can switch medium armor proficiency for a weapon proficiency instead.

The new subclasses are tons of fun. Many add psychic abilities to their classes, which is new for 5th Edition. If you like the idea of being a rogue with psychic daggers or a warrior that can use psychic powers, this book is perfect for you.

There are also changes and new options for the main classes. Many spellcasters will have far more spells to learn. They also added options for caster classes that can’t change their spells, allowing some to change some spells at certain levels.

There are also several new abilities that classes can use. The most drastic is for the ranger class. Many players have strong opinions that rangers are the weakest D&D class for 5th Edition. Rangers now have the option to replace certain class features such as Favored Enemy and Natural Explorer.

What really helps rangers are new rules for the Beast Master subclass. I feel everyone deep down wants to journey with an alpaca capable of slaying evil tyrants.

The old Beast Masters were constantly mocked since you end up with beast that is roughly a level one creature, and that doesn’t work when you’re level 10 and fighting creatures that can one shot a weak wolf.

However, with Tasha’s Cauldron of Everything they now have custom stat blocks that fit into land, sea, and sky beasts. Each stat block is meant to get stronger when you level up. I haven’t tested these out so I’m not sure how effective they are at higher levels, but at the very least this is better than the original options.

Tasha’s book also brings the artificer class to the general public. It already exists, but just in the Eberron book. I’m a big fan of Eberron, but not every player is going to buy this book if they don’t have interest in running a game in that world. (You can find Ebberon book on Amazon.)

Artificers use technology to create magic items and use them for combat. There is also a new subclass for artificers, the Armorer. It lets you build a magic set of armor if you want to be Ironman.

The Eberron book also introduced the idea of the party having a patron to work for. The Eberron book focused on characters and factions from Eberron, so Tasha’s Cauldron of Everything creates a set of architypes for patrons.

You can work for:

Rules wise this doesn’t add much, but it is a great tool to inspire Dungeons Masters. Each patron has perks such as discounts on certain items or the ability to train to gain new skills.

The book also includes random tables for patron contacts to give quests, types of quests, and details on the patrons themselves.

Tasha’s adds new spells that affect most classes. You have more psychic power based spells. There are tons of new summon options such as:

Something that’s fun but doesn’t affect power is the idea of personalizing spells. So they say it is okay if your Magic Missile spell sends spectral chickens at your opponent instead of boring little lasers.

Basically you get to customize the visual effects of your spell to give your character more personality.

Magic Items in Tasha’s Cauldron of Everything

Tasha’s Cauldron of Everything brings plenty of additional magic items for you to use.

I’m super excited for the new magic items. There are tons that fit for specific classes, and some great artifacts for high level parties. Tasha was raised by the Baba Yaga of legend so there are many items related to Baba Yaga.

They finally added magical tattoos, but they’re strange since they take an attunement slot to use. On the plus side that means you can remove a magical tattoo (it turns into a needle) and then gift it to someone or apply again as a new design. I’d change my tattoos daily.

One of the biggest hurdles your parties can run into is when you finish making your characters and you figure out nobody can heal or pick locks.

Sidekicks are characters that level up alongside the party and allow them to fill in gaps in the party or just have a NPC to help the party out. There is a large stock of abilities you can give them so they can fill many roles inside and outside of combat.

Expert sidekicks focus on high skill checks, and helping allies in combat. They’re very similar to rogues and bards but without spells.

Spellcasters are a combination of every spellcasting class, so you can have them be focused on damage, healing, or support spells.

Warriors are meant to absorb and deal damage within melee range.

Something the book mentioned that I wouldn’t have thought of is giving sidekicks to new players that don’t want a full character. This is perfect for:

The final chapter is full of difficult but solvable puzzles to give your players. There are tons of websites that offer the same, but I love the puzzles they use.

They offer separate pages of visual aids to give to your players, which are very useful. Members Only is my favorite puzzle from Tasha’s book because I feel it is the easiest to naturally fit into a campaign.

Is Tasha’s Cauldron of Everything Worth Buying?

This book is amazing for DMs wanting to start their first or tenth campaign. I love that they have content for experienced and newbie players alike.

I’m super excited to test out some of the subclasses, and I really want to try a Beastmaster Ranger to see if it is viable at higher levels.

All in all, this is a pretty good book for any D&D enthusiast, especially if you like any of the new additions I talked about. The price (check on Amazon) is also quite reasonable, which is always a plus.

If you’re a collector by heart you might prefer the book with the alternate cover. The book is slightly bigger with 8.62 x 0.79 x 11.22 inches and has an amazing cover done by Wylie Beckert.

That’s all about Tasha’s Cauldron of Everything! If you got the book, please comment your favorite content that you used!

Until next time, may you enjoy your new book to its full potential!