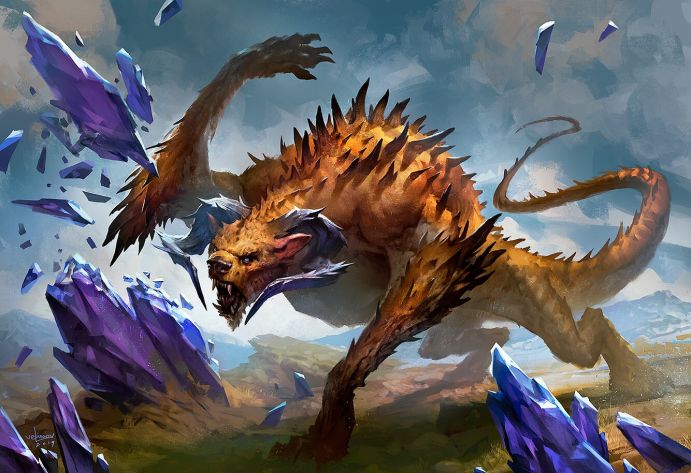 Hello, friend! Welcome to yet another Top 10! This time around we’ll talk about Top 10 best cards to craft from Ikoria: Lair of Behemoths.

Rankings like this are often hard to make and vary from a player to player. A control player will want to craft different cards then aggro player.

So with that in mind we try to choose cards that will be played in Standard for a long time. If we expect a card to be played even after the Standard rotation, it should be higher on our list.

Sometimes we’ll pick a card that fits only a certain shell. When that’s the case we’ll make sure to mention it. Cards on this list are usually pretty close in power level, so just craft the ones that you’ll most likely play.

We tried to pick very playable cards, so you won’t waste your wildcards, no matter which ones you choose.

Vivien, Monsters’ Advocate barely missed Top 10. It’s a good card, that saw some play in different green decks on Arena. Sadly, it hasn’t really preformed in any of the best decks so far.

So why is Vivien on our list then? The reason is in her raw power. The card allows you to do some very powerful things. Playing creatures form the top of your library, making tokens, tutoring creatures from your deck.

Vivien only needs a metagame shift towards the green creature decks and it will become a staple. Maybe the rotation will help with that.

So if you really like Vivien, go ahead an craft a couple of copies on MTGA. It’s already somewhat playable and in might become even better.

Number of copies you usually want: 2

Creatures from the Apex cycle are all pretty powerful. However, only one made it to our Top 10 Ikoria Cards to Craft list. That’s Illuna, Apex of Wishes.

Now to be fair, it only slots in one very specific deck, blue – green ( – red) mutate. This deck probably won’t get much upgrades in the future. That’s why Illuna is (despite its power level) only number 10 on our list.

So craft Illuna, if you enjoy the mutate mechanic, but know that it might not get much improvements with the new sets.

Extinction Event is not your usual four mana wrath. Most of the time it won’t clear the whole board, but that can prove useful sometimes.

You can keep your creatures alive, while exiling most of theirs, with the right choice of odd or even. As you can imagine, it’s particularly powerful against Gyruda, Doom of Depths or Obosh, the Preypiercer decks.

As such, Extinction Event is a great card to craft if you like to play black controlish decks.

Number of copies you usually want: 2

Winota is really powerful. She would be even higher on the list if not for her dependence on other cards, particularly humans.

Currently we have Agent of Treachery, but what will happen after it rotates in September? That’s impossible to tell, but we still suspect that Winota will be at least somewhat playable.

So if you enjoy cheating creatures into play, Winota is a great Ikoria card to craft.

Second mutate creature on our list is Gemrazer. It’s just a very versatile card, that doesn’t need a mutate deck built around it.

For as long as there is a green deck that uses non-Human creatures and wants to destroy opposing artifacts or enchantments, Gemrazer will have a home. As this is a pretty low bar to pass, you should definitely craft it on Arena if you like playing green decks.

Number of copies you usually want: 3-4

The first companion appears on the sixth place. As it turns out, an aggro deck can function just fine with a bunch of one and three drops, alongside this powerful guaranteed Hellion.

If you’re an aggro player, who wants to try something a bit different, Obosh is certainly a safe Ikoria card to craft on MTG Arena, particularly since you only need one copy.

There’s a joke that players only see Lukka’s second ability. It’s somewhat true, since most of its power level is located there.

With Lukka in your deck, you usually just play a bunch of tokens, with Agent of Treachery as your only creature, so Lukka always has a very powerful creature to get.

Even after rotation, you can expect Outcast to still see lots of play, with different targets, though – since Agent rotates in September 2020.

Shark Typhoon is basically a split card (card with two choices). Most of the time you’ll play it for it’s cycling ability and get an un-counterable flyer, which draws you a card.

Every once in a while, you’ll pay the actual cost. You’ll only do so when you’ll get a powerful shark army in the next couple of turns.

Split cards always turn out to be significantly better than each part separately. That’s also holds true for this powerful enchantment. It’s basically never a dead card and you’re always happy to draw it.

If you’re playing blue, this is probably the best Ikoria card to craft, since it will remain a staple until it rotates in fall of 2021.

Rare lands are almost always good cards to spend your wildcards on. That also holds true in Ikoria, Lair of Behemoths. Sure, these lands enter the battlefield tapped, but they make up for it with plenty of benefits.

First, the obvious one – they make three colors of mana, which is crucial in your three or four color decks.

Second, they have basic land types. This enables Castle Vantress and other four castles from Throne of Eldraine. Imagine we ever get fetch lands on Arena, those would make Triomes even stronger.

Last, but most certainly not least – they have cycling. It doesn’t come up that often, but when it does it’s really useful. You know how it goes, nobody enjoys drawing too many lands in the late game.

Here are all Triomes ranked by how much play we think they’ll get. That’s mostly based on how controlling the colors are.

Red-white-blue is usually a control deck, while the red-white-black is on the more aggressive side. That is reflected on our Triome rankings.

However, they’re all still pretty good, so craft the ones in the colors you usually like to play.

Number of copies you usually want: 4 (per different 3-color deck)

#2 Lurrus of the Dream-Den

Second place on our Top 10 Best Cards to Craft From Ikoria goes to Lurrus!

Even before Lurrus was printed, lots of decks wanted to play a bunch of cheap creatures. So Lurrus’ restriction wasn’t too hard to enable.

Lurrus has already found its home in two completely different archetypes: Red-Black Sacrifice and Red-White Cycling. Both of them proved to be pretty good and there’s certainly more decks featuring Lurrus to come.

All of that makes Lurrus a very safe card to craft. Barring any bans, of course. But even then, you’d get your wildcards back anyway.

Number one card to craft from Ikoria is most certainly Yorion, Sky Nomad. It turned the deck-building rules on its head!

When players asked us how many cards should they play in MTG deck, we always insisted to not go over 60. As it turned out, you can easily play 80 cards in your Standard deck, if you have a good payoff.

And this big bird truly is a great payoff. It works well with tons of cards, so here are just some of them:

You can expect Yorion to be a major player in Standard, for as long as it remains legal. Therefore it’s probably the safest card to craft from Ikoria.

That’s all about best cards to craft on Arena from Ikoria: Lair of Behemoths. We still have some suggestions that might interest you, though.

Don’t want to miss another article? Give us a follow on Facebook or Instagram. You’ll get reminders for new articles, Daily Deals on Arena and Arena Codes. Speaking of codes, you can find all current MTGA codes here.

Anyways, that’s all for today. Have fun and may your wildcards never go to waste.