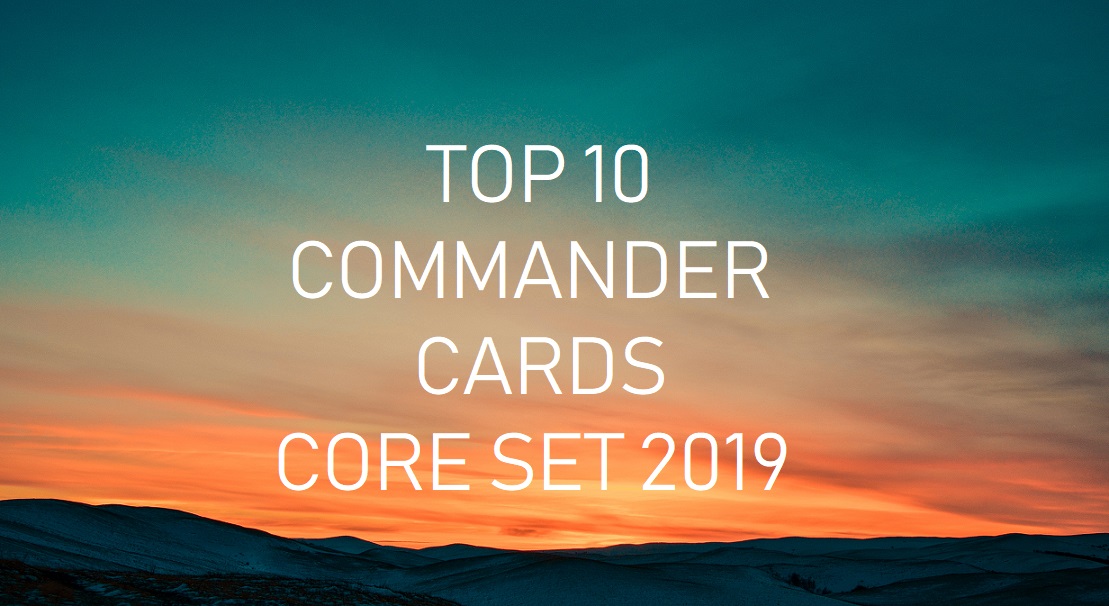 M19 – also known as Core Set 2019 or simply Magic 2019 – marks a return to Core Sets. The supposedly last one, Magic Origins was awesome and M19 might be even better! Planeswalkers, powerful reprints, awesome Legendary Creatures, Magic 2019 has it all. Let’s take a look at what are the Top 10 Commander Cards in M19.

Reprints in regular expansions usually aren’t the best cards, but oh boy does the Core Set 2019 change that!

Scapeshift was selling for almost 60$ before the reprint, since the card is Modern and Commander staple. You can sacrifice your less useful lands and go get some that do something awesome. Some examples:

Scapeshift also abuses cards with landfall. Tireless Tracker becomes even more insane value engine. If Omnath, Locus of Rage is your commander, Scapeshift is a must-have.

There are also  some cards without landfall, which you shouldn’t miss. Titania, Protector of Argoth and The Gitrog Monster are two examples.

Hand in hand with Scapeshift comes this great artifact. Crucible is so good it, was worth over $70 before the reprint. But Crucible isn’t limited to only decks with Scapeshift. You can easily play it with just some fetchlands like Arid Mesa or a Field of Ruin.

Omniscience is back! Yeah it’s expensive, but once you can get it on the battlefield it’s basically game over. Play some card draw afterwards , and just Enter the Infinite. Play your whole deck and win the game!

One of the best black lords was worth over $20 before the reprint, because of its popularity and scarcity. Great with commanders like Gisa and Geralf or Grimgrin, Corpse-Born. If you decide to put it in Thraximundar, you might want to know about Deathbringer Thoctar. Thoctar becomes a one-sided wrath with Death Baron due to its interaction with deathtouch.

The dino, the myth, the legend. Ever since his first appeared in Ixalan, Colossal Dreadmaw has been featured in Rivals of Ixalan, Iconic Masters and now in Core Set 2019. It is now part of the Unreserved List – meaning it will be reprinted in every possible set.

If you activate Door to Nothingness, with Dreadmaw in play you will win. If Colossal Dreadmaw attacks, when your opponent is on 5 and they block with a 1/1 – guess what? You win!

Jokes aside, please don’t play Dreadmaw in your commander deck. But if you do send a photo of it our way. 🙂

But the reprints are far from  being the only good commander cards in Core 2019.

Chaos Wand is another card that goes kinda infinite with Paradox Engine. The problem is that sometimes you exile an instant or sorcery you can’t cast an therefore breaking the loop.

But it’s still a very fun combo and can provide some fun experience, when you get a wrath you needed from top of opponent’s library. As a result Chaos Wand is the number 10 on our list of Top 10 Commander Cards in M19.

Dragon Commander player rejoice, your Queen is here. If you bought a Dragon Tribal Commander deck last year, this is a must-have for your deck. It can also be used as a mono red general, since there are plenty of red dragons in Magic the Gathering. You can also play the best colorless dragon creature Steel Hellkite. His red cousin Hellkite Tyrant isn’t far behind and you can totally wreck some decks with it.

A little finance tip: You might want to buy yourself Zirilan of the Claw sooner rather than later. It’s an okay dragon tutor and it’s on the Reserved List (will never be reprinted again). That means he might become more expensive in the future.

Is Tezzeret a great addition to any blue artifact deck? We sure think so. Getting three artifacts in play is laughably easy in commander (artifact lands are legal here). Because of that drawing two cards a turn will be very consistent. So for 5 mana you get two Phyrexian Arenas – staple in black commander decks – without the life loss.

You can however just tick Tezzeret up each turn and get a Thopter to help protect him until he gets to 9 loyalty. Tezzeret merged with Planar Bridge, and this is what you get if you manage to ultimate him. Every turn you get any permanent from your library. How insane is that?

If you can’t wait to get to the last ability, consider building blue-green deck with Doubling Season. This way, you can instantly  ultimate Tezzeret and quickly win the game.

In the right Commander deck Liliana is a real powerhouse. She is not only getting you zombies from the top of the library, but she is filling up your graveyard. This can often be useful in a black deck especially one full with zombies.

She is a great addition to any zombie deck but especially if your commanders are Gisa and Geralf – since you already build your deck around playing zombies from the graveyard. Liliana helps with this with her ultimate ability, which you can use the moment she comes into play.

Liliana is really designed just for one specific deck, but it that one she’ll shine and that’s why she is number 7 on our Top 10 Commander Cards in M19.

Do you like Chaos Warp? If so, you’ll like this big dragon even more. Destroy best permanent for each player and one of your lands, then spin the wheel and see what each of you’ll get. Vaevictis will definetily provide some sweet games of Commander and there are plenty ways to make him attack safely. We know he’s a dragon but, surly he can fit on those Lightning Greaves, right?

For a maximum amount of fun try to get It That Betrays in play and then attack with Vaevictis. 🙂

Vivien might reed a bit uninspiring with the vanilla planeswalker design – looking like a green Ob Nixilis Reignited. But here -3 ability is really juicy in Commander. Get that Mirari’s Wake out of here, take off Swiftfoot Boots, remove Steel Hellkite, kill Sphinx of the Steel Wind … Wait, no that doesn’t work.

Never the less the ability to destroy a very powerful permanent while leaving behind a powerful planeswalker which can dig four cards deep can be a game breaking play. The ultimate ability is basically just icing on the cake.

This card is not trash at all! Quite the contrary – every goblin deck will want to play him. Gobilns have plenty of token makers like Siege-Gang Commander or Krenko, Mob Boss. Use them to destroy all mana rocks your opponents have or just kill their big artifact creatures. Or – I don’t know, just turn them sideways and attack your opponent, they all have +1/+1 because of Trashmaster anyway.

While the the cards itself is very simple and clean (heh) in design, don’t let this deceive you. This is a very powerful effect. Your are overpaying for each effect – if only for one mana, but you are getting options. And having more options is great – not only in Commander but in every Magic the Gathering format.

Playing against Breya, Etherium Shaper or some other artifact deck? Blow up all of their artifacts. Battling against Gishath, Sun’s Avatar? Looks like dinosaurs are going extinct once again.

We are sure that with suck versatility Cleansing Nova will find place in many white Commander decks.

The face of Core Set 2019 Nicol Bolas packs a big punch. On the front side we have a 4/4 flyer which forces EACH of our opponents to discard a card. But if you manage to flip it you get an insane Planeswalker. You can immediately get back best creature or planeswalker from ANY graveyard, and then just start drawing a couple a cards each turn.

You can also easily get rid of a problematic creatures or planeswalker. His ultimate is so good that if you would replace it with “You win the game.”, you wouldn’t be far of.

However be careful when you try to flip Bolas if you don’t have a counterspell backup – your opponents can kill it in response and you’ve just wasted 7 mana.

Bolas is still a very powerful Magic the Gathering card and gives you access to three colours when building your deck – that’s why he sits at number 2 of our Top 10 list.

At number one is another Legendary Elder Dragon. Arcades takes the first place with being a commander of a whole new archetype – Bant Tribal Defenders. If you think about building it you should. The deck will be awesome!

Wondering what to included in a deck besides commander staples and a bunch of defenders?

This seemingly unexicting uncommon might actually be quite usefull in Commander. While its mana cost is high, you can easily find a way to discard Golem for value, then reanimate him with Liliana, Death’s Majesty for example.

Golem is colorless which is nice, because it can go into any deck because of that. Daretti, Scrap Savant will also like him, for sure. And it can be a good card to put on the battlefield when your opponent plays Show and Tell.

So don’t throw the Golem away when you’re sorting your draft chaff.

In case you are interested in more cards from M19 you can check them in the official Card Image Gallery.

Considering opening some boosters to get some new cards for your Commander deck? Get yourself a Magic 2019 Bundle or even a Booster Box.

If you are looking for a idea for a gift you can check our Gift Guide.