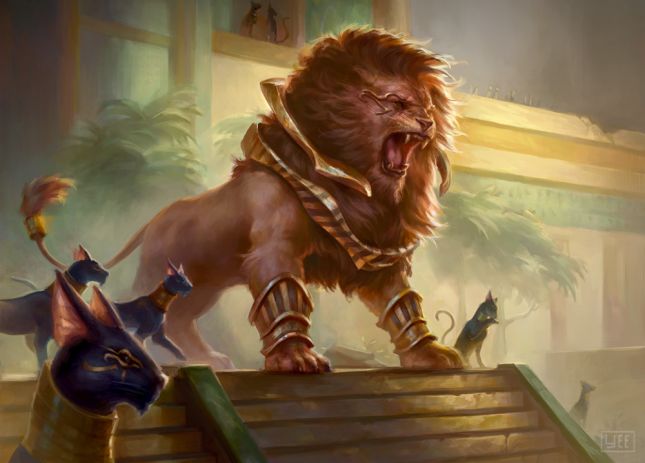 Hello and welcome to yet another Top 10! This time we’ll talk about one of the cutest creature types in Magic – it’s Top 10 MTG cats!

We picked the cats that will work great in your MTG cat deck or are just good in a specific commander deck. So let’s get right to it.

There are so many amazing cats, that we couldn’t put all of them on the list. So here are some honorable mentions.

First, there’s one cat that isn’t on the list because it’s not particularly great in a random cat deck. It should probably be number one, on power level alone. It’s Wild Nacatl! Believe it or not, this one drop was once banned in Modern.

Best card with cat-themed art is probably the original Path to Exile, although the cat is dissolving into nothing on the art. Or maybe it’s just going on a vacation.

Although not technically a cat card – Ajani is a leonin planeswalker, who deserves an inclusion. Here are some of our favorite Ajani cards:

There are more Ajani cards, but that’s a whole other article. So let’s go to our number 10!

King of the Pride is a homage to the iconic white one drop cat – Savannah Lions. With king in play every cat gets the Savannah Lion buff of +2/+1. Pretty good for a deck with lots of small and cheap kittens.

Do you just hate counterspells? So does this cat snake!

Prowling Serpopard won’t get countered. Your other creatures (cats, snakes or anything else) won’t care about Couterspell either. So if you’re playing against a control player, it might be a good idea to add a Serpopard to your cat deck.

Pride Sovereign is great. If you have a lot of cats, it’s a really big one, ready to attack. However, if your missing creatures, you can exert it to make to lifelink Cats and start growing your army. You can also block with it and then exert it to make it bigger.

What if your cat is also your alternate win condition? Lots of cat already care about gaining you life. Felidar Sovereign can play nicely with life-gain theme. Why win with attacking, when you can just gain a bunch of life and win that way?

Also, don’t forget that 40 is a starting life total in some formats like multiplayer Commander. Could be fun to try out!

The bigger version of Qasali Pridemage, is great for any cat themed deck. This cats just hate artifacts and enchantments. If your opponent is playing lots of them, Slingers will help you get rid of that stuff.

Long time Magic fans will know that this isn’t the first version of this character. There’s Mirri, Cat Warrior and Mirri the Cursed. Both were good when they were first printed, but nowadays not so much.

Thankfully, cat Commander deck (check its price on Amazon) brought us a new green-white Mirri. She’s quite good for combat orientated decks. When she attacks – only one blocker is allowed. As long as she remains tapped you don’t even have to worry about the back swing. Only one creature can attack you anyways.

Brimaz has great stats for three mana and he brings a little buddy with him whenever he attacks or block. If you’re playing a dedicated cat deck, the cat token might not even be that small at all. You can take advantage of cat lords.

Kaheera is the newest cat on the list. It welcomes five different creature types, but let’s focus on cats. If your deck contains only cat creatures, Kaheera can become your companion.

That means you’ll be able to play it every game when you reach three mana. It’ll boost you cats – giving them +1/+1 and vigiliance.

Lords is Magic’s jargon for creatures that buff creatures of a certain type. Regal Caracal is probably one of the best lords of all time. The problem with these kind of cards is that sometimes you won’t have any creatures to buff.

Well, Regal Caracal doesn’t care. It bring his own personal army of cats with him. Also, giving your cats lifelink is crucial, when you’re battling against another creature deck. You can turn around a losing game with a timely Caracal.

#1 Arahbo, Roar of the World

Arahbo, the cat commander is our pick for the best Cat card of all times, especially once you play them as your Commander. It provides advantage even from the command zone, thanks to his eminence ability.

Once you get to combat you can essentially double the stats of your cats. Let’s go cat army!

That’s it – our list of Top 10 MTG cats is concluded. Do you think we missed some? Tell us in the comments bellow.

If you want to check more of our Top 10s, here are some suggestions:

If you want more fun MTG content you can browse through our Instagram or Facebook page. Besides Magic news, spoilers and strategy tips, we also have Magic memes and a great community.

Anyways, that’s all for today and may you find the purrfect cat card for you.

2 thoughts on “Top 10 Cats in Magic the Gathering”