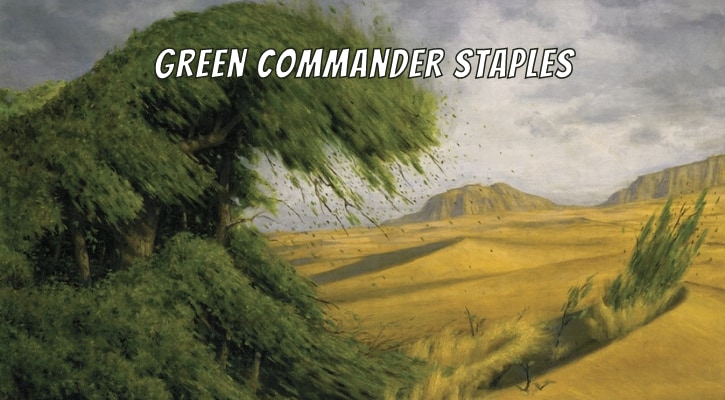 Here’s a quick overview of the best Green Commander staples. The list is by no means a definitive one, but it includes most of the best Green cards in my opinion. Each one of these cards has generic utility. This means they show up in a lot of Green decks.

Green’s bread and butter is creatures. There are so many creature staples in Green that I feel confident that I missed some with this list. However, there are a few categories that we can talk about here.

First, Green is full of ‘mana dorks’. These are creatures that tap for mana. In some cases, like Llanowar Elves, they only tap for Green. Others, like Birds of Paradise, are valuable in multicolored decks because of their ability to tap for any color.

Other creatures can search your library for lands. Sakura-Tribe Elder and Wood Elves are examples of these creatures.

Green is also good at playing additional lands. Oracle of Mul Daya is one of the most common creatures with this kind of effect, but there are tons more, like Dryad of the Ilysian Grove and Azusa, Lost but Seeking. You can combine these with landfall creatures, such as Scute Swarm and Tireless Provisioner to get tons of value.

Reclamation Sage and Acidic Slime are both creatures that destroy artifacts and enchantments. This is another thing that Green creatures are especially good at.

Green Commander staples can also get cards out of your graveyard. Eternal Witness is the quintessential example of those kinds of creatures.

Finally, Green has the best game-ending creatures. Three that come to mind are Avenger of Zendikar, Craterhoof Behemoth, and Seedborn Muse.

Green instants do largely the same things as the creatures do. They ramp for mana, destroy artifacts and enchantments, and get cards back from the graveyard. In addition to that, cards like Heroic Intervention can protect your creatures really effectively.

A rule of thumb for Green in Magic is that their payoffs require creatures in some way. For example, Green can draw with cards like Return of the Wildspeaker as long as you have creatures on the board. Similarly, a lot of Green cards can tutor, but they can almost exclusively search for creatures. For example, Worldly Tutor.

Finally, one Green staple is a color-pie break. This means that there are not a lot of cards that have this effect. However, this particular card is very commonly played. The card I am referring to, is of course, Beast Within.

Green enchantments are quite a bit more diverse than its instants and sorceries. Like creatures, Green’s enchantments can add additional lands (or untap them) and mana. However, they also have the ability to neutralize threats with cards like Lignify or Kenrith’s Transformation. Finally, Sylvan Library is a powerful enchantment that provides Green with non-creature related card advantage.

Green is known for hating artifacts more than any other color. However, there one Green artifact quickly became a staple. That card, of course, is The Great Henge.

Another one is Lifecrafter’s Bestiary, which is somewhat clunkier, but does provide a lot of value over the course of a long game.

Despite being the color that cares most about lands, Green does not have that many powerful lands. There is one exception, however. Obviously, Gaea’s Cradle is one of the most powerful lands in the entire format.

Other than that, though, Green only has a few lands worth considering staples.

That’s it for Green Commander staples. Want to read more about staples from other colors? Here are articles for you to check out:

And if you want to read up on how to use fewer staples in your decks, check out my other articles about problems with Commander Staples.

For a full list of the most commonly used Green cards in Commander, you can check out Edhrec’s Top Green Cards page.