Skip to content
Home → Strategy → How to Draft Jegantha, the Wellspring 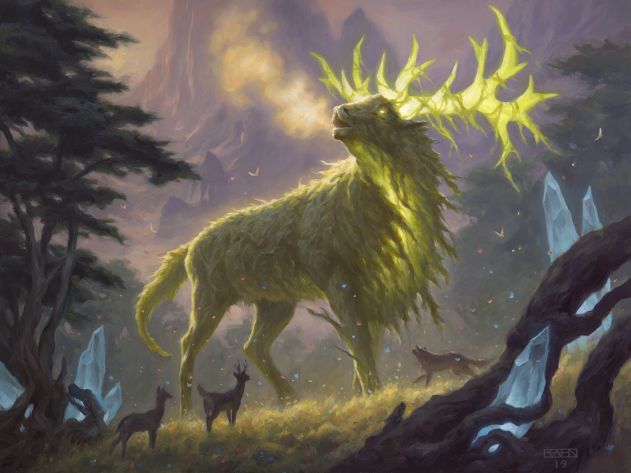 Did you open Jegantha in your Ikoria draft, but you’re not sure if you should play it as your companion? This Jegantha draft guide will help you decide.

We’ll take a look at when you should draft around Jegantha and how to do so. So without further ado, let’s get to it!

Is Drafting Jegantha Worth It?

Drafting Jegantha is worth it the vast majority of the time. You’ll start each game with an extra card in hand – a guaranteed 5/5 for five, which is pretty strong in draft. It also has an additional ability of getting you some mana, but that’s just gravy.

The cost of using Jegantha as your companion is pretty low, so you want to play it no matter when you open it in the draft. Even if you get it in your third pack, you should make the necessary cuts to enable this big elk.

As we said, you should draft Jegantha no matter when you get it. The only time you shouldn’t do so is when you also have multiple bombs – the most powerful cards in draft.

For example, if you have both Voracious Greatshark and Sea-Dasher Octopus you probably shouldn’t use Jegantha as a companion. However if you only have the rare shark, you’d rather cut the shark, as the elk offers you more consistency.

Just something insanely strong like Vivien, Monsters’ Advocate should stop you from using Jegantha as companion single-handedly.

So what happens when you do decide to use Jegantha as a companion? First things first, you should draft normally as you usually would, just ignore all the cards with two or more same symbols in their mana cost.

Don’t think that you have to draft either red or green, just because you got Jegantha. It’s very easily splashable. You can draft a fine blue-black deck and use common dual lands like Jungle Hollow or Swiftwater Cliffs to cast Jegantha.

Here’s an example of a Jegantha deck. We have great rares and solid cards all around. The biggest omission from the deck is Yidaro, Wandering Monster, which had to be cut to support Jegantha, but it’s well worth it.

As most Jegantha decks it doesn’t look much different from your regular draft decks. However, it comes with a guaranteed 5/5 and we’ll be favorites in most of our games.

Here are the things you should pay attention to when drafting a Jegantha deck:

That’s it and since there isn’t much to else to say about Jegantha, this article is a bit on the shorter side. Just remember to go for it whenever you get it in draft.

That’s all about drafting Jegantha. For more draft information, you can read our Ikoria Draft Guide.

Want more Magic the Gathering content? You can find it on our Facebook or Instagram. You’ll get daily Magic news, spoilers and memes. You’ll also get reminders about new Arena deals and codes. Speaking of which, you can find all current MTG Arena codes here.

Until next time, have a great time and may you never miss your fifth land for Jegantha.

1 thought on “How to Draft Jegantha, the Wellspring”