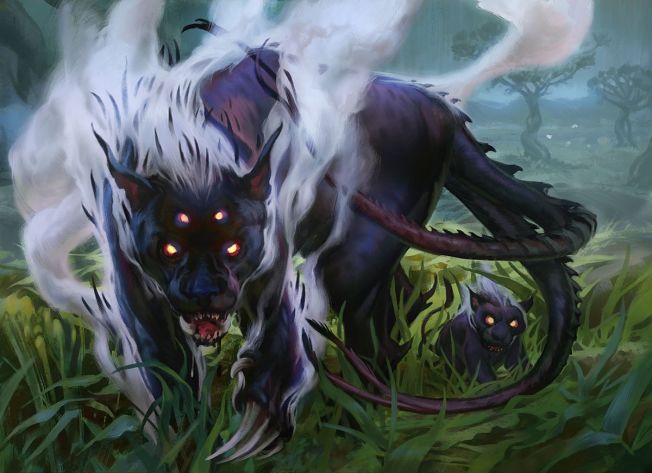 So you opened Lurrus in Ikoria draft. You probably know it’s good in Standard, but can you build a good draft deck around it?

That’s what we’ll talk about today. Everything about how to draft a good Lurrus deck and when should you go for it. Lurrus is the most fun companion to build around, so let’s get right to it.

Is Drafting Lurrus Worth It?

Well, drafting around Lurrus is very interesting, that’s for sure. Starting with an extra card in hand is nice, but you can only play permanents that cost 2 or less!

Drafting a Lurrus deck is worth it – when you get it in the first booster. That way you can plan your whole draft around it. That’s really necessary, as this deck has a really specific plan and relies heavily on Lurrus and the synergies it enables.

First thing first, don’t forget that only permanents are restricted. You can still play instants and sorceries of any costs, so pick your Blood Curdles early.

Besides premium removal spells, your pick order really changes when you decide to draft around this cat. Here’s how you should approach it.

As most of your cards are cheap you’ll want to be an aggressive deck. You want plenty of cheap creatures that can start attacking early. Something like Serrated Scorpion is usually unplayable. However, that’s not the case with a Lurrus deck.

You can cast it early and get a couple of attacks in. Afterwards, you can either send it to its death by attacking or use it as a chump blocker. It deals another 2 points of damage and you get to replay it if you have Lurrus in play.

Combat tricks can also be good, but the one we specifically like in this deck is Spontaneous Flight, as it provides not only power boost, but also evasion. Don’t be afraid to cast it in your first main phase and just go to town.

Because you’re an aggressive deck with a lower mana curve you can afford to play less lands. We’d suggest 15 lands for an average Lurrus deck with a bunch of one and two drops. This way you’ll get flooded less often.

Playing cheap creatures gives you another benefit. You can play multiple creatures in the early turns. Then you take advantage of them with mass pump spells. There are two such cards worth mentioning.

First one is Coordinated Charge. It’s a bit pricey at five mana, but you can cycle it away when you don’t have enough lands. When you have lots of creatures in play and you managed to deal some damage in the early game, Charge will simply win you the game.

The second one is Regal Leosaur. This one is particularly great. If you’re in red-white you can play it early. However, even if you’re only in white, it deserves a spot in your deck as a mass pump spell, that you can replay with Lurrus.

That’s right, you can cast it from your graveyard with its mutate ability, if you have Lurrus in play. It gives you a nice different angle of attack.

We already talked about using your graveyard with Lurrus – it’s basically what the card tells you to do. But don’t forget that there are ways to get Lurrus back from graveyard too.

The best way to do so is with Call of the Death-Dweller. As Lurrus is the key component of your strategy, a card that serves as a second copy becomes very strong.

Of course, when Lurrus is doing fine and well, you can also get other creatures from your graveyard if you have plenty of them.

Another way is to play Unbreakable Bond. However, it’s quite pricey, so Corpse Churn might be better. It also fills your graveyard, which is great in this deck.

There are some other cool interactions with Lurrus. For example, Sleeper Dart is usually a very bad card. In this deck it becomes playable, because you can draw an additional card with Lurrus on each of your turns.

Similarly, you can play Springjaw Trap. In the late game it’s basically five mana for 3 damage every turn. You won’t have to repeat that many times, before your opponent is dead.

So all that being said, here’s how an average game with Lurrus should play out:

Somewhere along the way, you can also get Lurrus back to keep the value train going. Okay, let’s take a look at how such deck could look in practice.

This one didn’t came quite together as we’d want to. It has some nice key cards for a Lurrus deck, but it only has 11 creatures.

However, in the actual games the deck worked really well and we managed to reach seven wins with it on Arena. Four Serrated Scorpions were really nice alongside three copies of Spontaneous Flight, which provided a much needed evasion.

Try to get more creatures if possible, but otherwise this deck is a fine example of how a Lurrus deck should look like.

Let’s quickly recap what you need to do draft a great Lurrus deck:

Make sure that you won’t miss another draft guide and give us a follow on Facebook or Instagram. Our posts include news, spoilers, alerts for new articles, daily deals on Arena and Magic memes.

Until next time, have a blast and may your Lurrus never die.

5 thoughts on “How to Draft Lurrus of the Dream-Den”