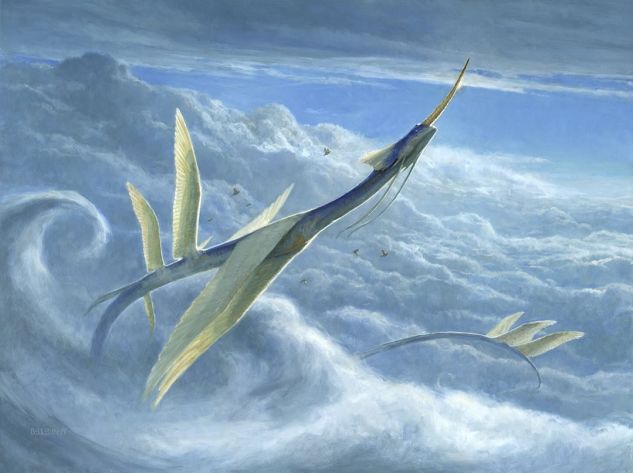 Let’s say you open Yorion in your draft. Should you go for it and build a 60 card deck? How should you make this work and still have a coherent deck?

Is Drafting Yorion Worth It?

Most certainly yes. Of course, you’ll lose some consistency, when you’ll add 20 cards to your draft deck. On the other hand, you’ll always start with an additional card in your hand – and a real powerful one at that.

Just a 4/5 guaranteed flyer for 5 is already good enough. But there’s more upside to it. You can also get your enter-the-battlefield effects again, and you can save your creatures from enchantment-based removal, like Pacifism for example.

When you open Yorion at the start of the draft, you should always try to build a 60 card deck, if you want to increase your win rate. However, if you get it in your second or third pack, it depends on how many playable cards you have.

You really want at least 10 playable cards at beginning of your second booster and 20 at the start of the third one.

So how many lands should you play in a Yorion draft deck? Well, the usual number is 17 lands in a 40 card deck. That means lands represent 42.5% of your deck.

If we take that same ratio and apply it to a 60 card deck, you’d end up with 25.5 lands. We’d rather round up or maybe even add another land, as you want to hit your fifth land consistently, so you can jam in Yorion on curve.

That means you should aim for 26-27 lands in your average Yorion deck.

Let’s say you’re playing 27 lands. So you still need 33 non-land cards. That’s 10 more than you’d usually play. Therefore you have to expand your definition of what constitutes a playable card.

First, some cards that often don’t make your deck, now deserve a main deck inclusion. For example, something like Mosscoat Goriak is often deemed just a bit too weak, but it is totally serviceable in a 60-card deck.

Furthermore, cycling cards are already good, but they are very important when you want 33 playable cards.

Something like Memory Leak – a card that cycles for just one mana – is always welcome in a Yorion deck. It doesn’t matter if you don’t have black mana in your deck. You just want to cycle it anyways.

Once you have lots of cards that you’ll just cycle away, you can remove some basic lands from your deck. In general for every 2-3 cycling cards, remove one land.

You want to make full use of Yorion’s ability. You can do so in different ways, but the most common one is to use permanents with enter-the-battlefield effects.

One such example is Frost Lynx. Another useful one is Sleeper Dart. When you cast it, it’s basically like a card with cycling 2. However, you can blink it with Yorion to draw another card – now that’s some value.

There’s one neat trick with cards like Pacifism and Capture Sphere. You usually don’t want to waste Pacifism early (on a random two drop). However, with Yorion as your companion you can afford to do so. Once your opponent plays something better, you play Yorion and blink auras to move them on bigger creatures.

Don’t forget that you can also blink your creatures that are locked down by Pacifism. The aura falls off and your creature is not so peaceful anymore.

Okay, so this example of a Yorion deck is probably one of the most insane drafts we had. We ended up in green-blue with a light white splash. There are 5 different rares here and the deck looks really fun.

However, the biggest problem with this deck is the lack of removal. Apart from three different counterspells and a Springjaw Trap, this deck doesn’t have much interaction. Hopefully, it can still preform with is raw card quality and guaranteed Yorion.

Here’s a quick recap of what you need to successfully draft a Yorion deck:

Until next time, have fun and may your Yorion deck always have enough playable cards.