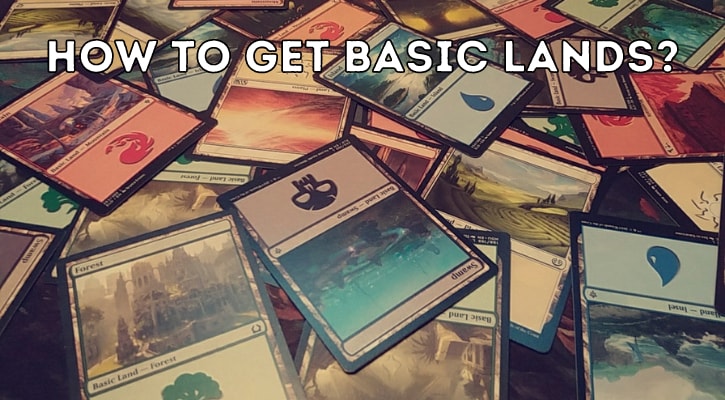 If you’re a newer player who just started playing, you might have trouble getting enough basic lands for all the decks you’re building. So today we’ll take a look at the most efficient ways to get plenty of basic lands, so you won’t ever run out of them again.

How to Get MTG Basic Lands for Cheap? Ask!

Many veteran Magic players have plenty of basic lands just lying around. Or stored in boxes, if they are more organized than we are. So if you know anyone who plays MTG, ask them if they have any extra for you to use. They’ll probably be happy to help you out.

The other way is to stop by your LGS (Local Game Store) and ask there. They might give you basic lands, especially if you buy some other MTG product. You can find the nearest LGS by using Wizards’s Store Locator.

However, if neither of those options work for you, you can just buy some product that contains basic lands. Let’s check what those would be.

In this table you’ll find some products that contain basic lands. The list is by no means definitive, but it’ll give you a good idea of what you should get.

As you might know, a regular booster pack contains only a single basic land. So, even if you’d buy a whole booster box, you’d get only 36 basic lands total. However, if that’s still something you’d like to do, you can check for best MTG booster boxes here.

Jumpstart booster is a special product. The basic idea is that each player gets two boosters, mashes them together and — BOOM, that’s your deck.

Each booster has a theme, and you can get some fun combinations like Cat-Vampires or Eldrazi-Goblins. You can get more information about Jumpstart Boosters here.

For that whole gimmick to work, each booster has to contain some number of lands. Jumpstart boosters contain 7-8 basic lands on average. One of them will even have a special art, equal to the theme of the pack. So this is a fun way to get some basic lands along with some other cool Magic cards, that you can actually play with immediately. Besides, these boosters really aren’t pricey.

The downside is that you don’t know which lands exactly you’ll get, so if you need some specific ones, this might not be the best choice — unless you’d buy a bunch of them.

Planeswalker decks are a nice buy, if you’re just starting out. These are 60-card beginner-friendly decks. As the name suggests, each of them contains a planeswalker, although one of a bit lower power level.

In addition, you get a booster pack with each deck, along with an Arena code, which redeems a copy of the same deck on MTG Arena.

Anyway, you’ll get 25 basic lands per deck. The good thing is that you know exactly which ones you’ll get in which deck:

One thing to note is that these decks are a couple of years old, so you won’t be able to play them at tourneys. Nevertheless, they’re still a great starting point for beginners, especially if you need some lands in a certain color.

Do you want to get both basic lands and boosters? If so, then bundle is the right product for you.

Each bundle contains 8 Set boosters of the respective set (the one above contains the newest Crimson Vow Set boosters) and 40 lands, 8 of each type. But that’s not all — half of the lands are foil, so you’ll get some shiny ones.

Of course, 40 lands might not be enough, but you could just grab a couple of bundles to get 80, which gives you 16 of each type.

We’ve reached the best product if you just want lots of lands. Land stations are used at the big Magic tournaments, so everyone has enough lands for their Draft decks.

You won’t get any extra stuff, unless you count the box, which you can use for storing your newly acquired basic lands. So, if you’re just looking for a way to get lots of basic lands in an official MTG product, it doesn’t get better than this.

You might have noticed another product, while browsing on Amazon — basic land lots.

These products are from various sellers, but what you’re getting is different packages of basic lands. You might find something even cheaper than Land Station this way, and you can expect more variety from your lands.

Let’s see some examples of what you can get.

You can 100 more basic lands, compared to the Land Station. However, there’s no box included, so keep that in mind.

There are also full art land lots available, if that something you’d like. These lands don’t have the big square with mana symbol on the bottom, but have bigger artwork instead. Here are some of our favorite ones from Battle for Zendikar:

Additionally, you can also get Kamigawa: Neon Dynasty full-art basic lands. These are really something special. Another interesting option are full-art basics from New Capenna.

Hopefully, this article helped you answer the question of where and how to get MTG basic lands.

So to quickly recap, the best way to do so is to just ask someone who’s been playing for a while. If that doesn’t work out, you can also buy the Land Station on Amazon, which contains 400 basic lands, 80 of each type.

Anyway, that’s all for today. Until next time, have fun and although you’re just getting them — may you never draw too many lands.

1 thought on “How to Get MTG Basic Lands?”