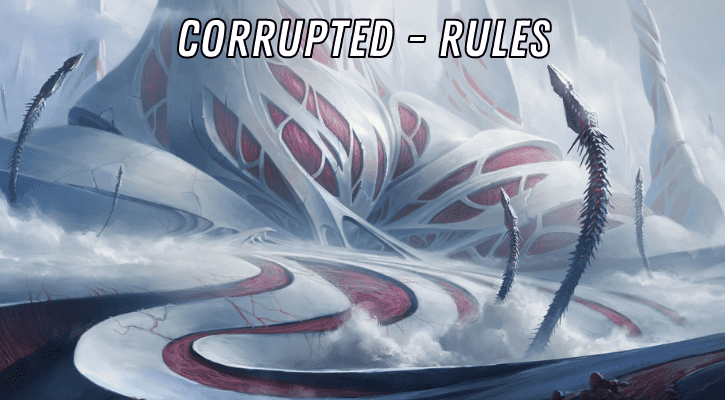 Corrupted is a new MTG ability word introduced with Phyrexia: All Will Be One. In this article, we’ll talk about all the rules you need to know about it, including:

This is an interesting mechanic, so let’s get right to it!

How Does Corrupted Work?

Corrupted can appear on various card types. A card with corrupted gets better if an opponent has three or more poison counters.

As such, the mechanic is pretty simple, and straightforward in most scenarios, but let’s take a look at a couple of examples anyway.

Here’s The Seedcore, a rare land from Phyrexia: All Will Be One.

It has three abilities. The first one gives you colorless mana, and the second one mana of any color that can only cast Phyrexian creatures. The third ability can only be activated if the corrupted condition is met.

White got its version of Bitterblossom with Phyrexia: All Will Be One. Its main job is to pump out 1/1 toxic creatures. This will be available to you even if the corrupted condition isn’t met. Once you do get to it, and an opponent has at least three poison counters, then your creatures with toxic gain lifelink.

The cool part about this card is that due to the tokens having toxic mechanic, the card can actually enable itself, which isn’t always the case.

Even tough corrupted is a straightforward mechanic, some question might still arise about it. Here are some of the most common ones. If you don’t find the answer to your question, feel free to leave a comment at the end of the article, and we’ll get back to you.

Does corrupted count poison counters from multiple opponents together?

If I have three or more poison counters, will my corrupted cards get the bonus?

No. Corrupted checks if an opponent has three or more poison counters.

What happens if an opponent removes some of their poison counters?

In that case, your corrupted cards won’t get the bonus anymore.

What happens if I played my corrupted card before my opponent got three poison counters?

It depends on the type of card. If it has a one time effect, you won’t get the effect later. However, if you played a card with a static effect, and your opponent gets to 3+ poison counters later, then the card’s ability will unlock immediately.

In these rules articles, we like to take a look at the flavor and see how much sense it makes. Corrupted mechanic is pretty clear as far as the flavor goes. Once someone gets three poison counters, it’s clear that the Phyrexian corruption has started to take place – they are now corrupted.

That means that Phyrexian-themed cards will have a better effect on them. Flavor-wise, this mechanic is perfectly executed.

In this section, we’ll talk about various interactions with toxic in different MTG formats.

How to Turn On Corrupted?

Turning on corrupted is simple. You just have to get the opponent to at least three poison counters. But what are some of the best ways to do so?

Well, if we look at the older cards, anything with infect will work. Creatures with infect deal damage to players in the form of poison counters. Some commonly played ones are Blighted Agent and Glistener Elf. (They are good with pump spells.) You can also do it with a single attack with something like Putrefax. Another option is to use Tainted Strike on one of your creatures without infect.

In the Phyrexia set, you can use creatures with toxic. These also make your opponents get poison counters. Of course, once an opponent has a poison counter, you can proliferate it with various cards such as Thrummingbird.

There are many options, and which ones you’ll choose is up to you.

The reason is that even if you have lots of ways to give your opponent poison counters, it won’t be trivial to do so. In the games where you manage to do that, you’ll probably be winning already. In that case, a card that’s only good when corrupted is active, can be considered a win-more card.

Win-more cards are, as the name suggests, cards that are only good when you’re winning. You don’t want to play such cards, but you prefer cards that are useful in other scenarios as well.

If you like both the corrupted mechanic, and the Commander format, then you’ll surely enjoy Ixhel, Descendent of Atraxa. You can see the card below, but it’s in Portuguese. The reason for this is that the card was not officially previewed, but was posted too early on Amazon Brazil. Fear not, as we’ve also included the translation.

Corrupted — At the beginning of your end step, each opponent who has three or more poison counters exiles the top card of his or her library face down. You may look at and play those cards as long as they remain exiled, and you may spend mana as if you were any color to cast those spells.

Ixhel has an interesting corrupted ability. In order to get the most out of it, you’ll want to corrupt all of your opponents. This makes it a unique commander, as previously most commanders with poison counters had only one plan. Get each opponent to 10 poison counters, and win.

With Ixhel, you’ll want to get everyone three poison counters, and get value that way. Your opponents might be less likely to pile on you, due to the fact that you aren’t trying to cheese out a quick win with poison counters.

Corrupting Influence is one of the two Phyrexia Commander decks, and its main commander is Ixhel. So, if you’re looking for a new deck, which utilizes the corrupting mechanic, this is a solid buy.

The vast majority of the cards just care if one of your opponents has 3 or more poison counters. If that’s the case, then you’ll get the corrupted benefits.

However, some specific cards might work in a way like Ixhel, which says: “…each opponent who has three or more poison counters…” In that case, the card gets better and better the more opponents you have with 3+ poison counters.

That’s all about the corrupted mechanic. Hopefully, you now know how it works, and you’ll be able to use it to your advantage.

If you want to open some cards with the toxic ability, you can get yourself a Phyrexia Set booster box.

Until next time, have fun and may you corrupt your opponents quickly and without too much trouble!