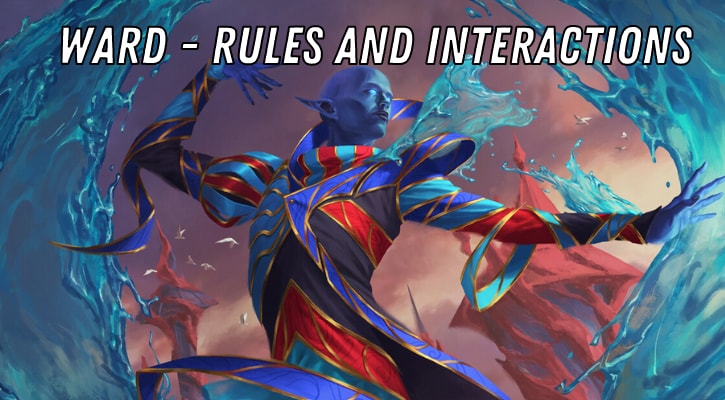 Ward is a new MTG mechanic in Strixhaven: School of Mages. In this article, I’ll explain everything you need to know about this new mechanic, including:

How Does MTG Ward Work?

Ward is a triggered ability that appears on permanent cards. Whenever a permanent you control with ward becomes a target of a spell or ability an opponent controls, that opponent has to pay its ward cost (specified on your card). If they don’t, their spell or ability gets countered.

Let’s look at some examples.

Here is another example:

I hope that those examples have cleared up how the MTG Ward ability works. If you have any further questions, they will hopefully be cleared up in our FAQ section.

If I target something that has ward with two spells, will I have to pay for Ward twice?

If I target something with ward with a spell, do I still have to pay the spell’s mana cost?

Yes, the ward ability is an additional cost, not a replacement cost.
For example, targeting your opponent’s Owlin Shieldmage with a Murder requires you to pay three mana and three life.

Do I have to pay the ward cost for my spell/ ability to resolve if it can’t be countered?

What happens if a creature has multiple instances of ward?

Yes they do. If your creature somehow has ward 1 and ward 2 and your opponent targets it, then two triggers will go on the stack. Your opponent will have to pay three mana total in order to go around ward.

Do you have any specific questions about Ward? Feel free to ask us in the comments, and we will answer as quickly as we can.

One thing that is important about Strixhaven university is a degree of privacy. You don’t want anyone stealing potions from your locker or copying your test. The ward ability represents this, making sure that your enemies pay an extra price for trying to copy your test results, or in this case, targeting your Creature with their spells and abilities.

MTG Ward cards and Sphinx of the Final Word

If your opponent is bringing a deck full of ward cards, one way to crush them is Sphinx of the Final Word. This card negates a large part of your opponent’s Ward effects, making Ward cards useless against Instant and Sorcery spells that you control.

As previously mentioned, this is due to the wording of ward, which states that if the Ward cost is not paid, then the spell or ability will be countered. Since Sphinx of the Final Word makes your Instants and Sorceries uncounterable, the Ward ability will have no effect. (It will still affect abilities.)

Another interesting interaction with the MTG ward ability gives you the opportunity to make your Ward cards more impactful. Since ward is a triggered ability, you can copy Ward abilities with Strionic Resonator. This can make your opponent pay double the price for targeting one of your Ward creatures with a removal spell.

Thanks for reading about the ward ability. Hopefully, you now have a better understanding of how ward works and how to use it to your advantage in game. If you still have questions about ward that you’d like answered, make sure to ask them in the comment section.

If you’re looking for more articles to improve your MTG knowledge, maybe you’ll like some of the following ones:

Until next time, and keep protecting your creatures!