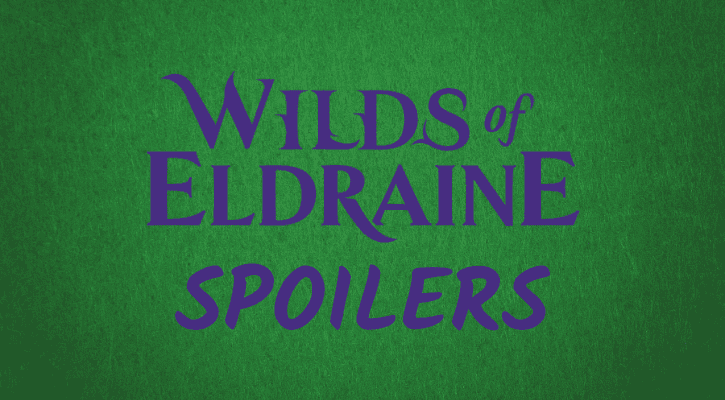 Eldraine is the fairy-tale Magic world, full of knights, castles, royalty, and magical monsters. The first Eldraine set was full of powerful cards, and many of them had to be banned in Standard. Will our second visit also contain many strong cards? Will Oko, Thief of Crowns return? We’ll discuss all this and more in today’s article, where we’ll explore Wilds of Eldraine spoilers, news, and predictions.

Before we go any further, we have to say that there are no Wilds of Eldraine spoilers currently available. Nevertheless, there’s still some information available, including some art from the set. We’ll also make some predictions about the set, so let’s take a look at…

What’s Happening in Wilds of Eldraine?

If you’ve been playing for a while, you might think – hey, it wasn’t that long since the first Eldraine set. However, that was back in 2019, which means when four years have passed between both Eldraine sets.

With return sets, Wizards don’t just want to rehash the same things we saw before. They want the setting to feel familiar, but usually with a twist. So, this time around, the key difference is in which part of Eldraine we’ll explore. While the bigger focus of the first set were the populated places, now we’re moving outside the kingdoms, and towns deeper into the wilds, as the name of the set suggests. Therefore, this set will have an even more dangerous feel to it than its predecessor.

Here are some unofficial predictions about Wilds of Eldraine. Take these with a grain of salt, as even though we try to support these theories with various facts, they might still turn out to be completely off the base.

The original Eldraine set contained many fairy-tale tropes. However, one that was noticably missing was the Evil Queen. There were cards like Ayara, First of Locthwain, Tempting Witch, and Wicked Guardian, all of which share some similarities with the character from the stories, but none of these are actual queens.

However, there was a mention of a Shadow Queen, in the flavor text of Deathless Knight.

“Headed to the Wilds? Beware the dead riders who serve the Shadow Queen.”

Whenever we do another visit to a plane, one thing that we get are cards for characters that were mentioned in story or in flavor text, but didn’t actually get the cards yet. So, one of those would be the Shadow Queen, and that’s very likely, as one of the first art pieces for Wilds of Eldraine was this amazing work from Magali Villeneuve:

So, while her Deathless Knights are Green-Black, this card looks pretty much mono Black, if we speculate solely from the art. Of course, that would also fit the character of the Evil Queen.

As for whom she might be, our best guess is that she is the mother of Rowan Kenrith and Will Kenrith, so the first wife of Kenrith, the Returned King. Sure, she’s supposed to be dead, but Wizards have no problems returning supposedly dead characters, as we’ve seen in the recent sets (Ertai Resurrected for example).

While she looks a bit young, there’s a hint that she isn’t as young as she might seem at first glance. If you look at her collar, you’ll notice that there’s a reflection of her, in which see looks much older. Well, keeping eternal youth with a spell, would fit this character.

This prediction is quite vague, and easy to make. Since we’re going to explore the wilds, we can expect even more monsters. That’s not to say that there weren’t any in original Eldraine, but the monster-count will be significantly higher here.

Hopefully, there aren’t many with such wall of text as Questing Beast. That card got a new ability each time you’ve read it.

The image you saw above, in the What’s Happening section, is very reminiscent of Fire-Lit Thicket. This is part of a cycle of ten two-color lands, which each have the same type of effect. They’re called filter lands.

Their power level is fine for Standard, and their names aren’t plane specific, so they would fit nicely in the Wilds of Eldraine. If they do appear there, we’ll most likely see five of them, and get the other five in a later set.

In the original Eldraine, we got five Castles (such as ), as well as common utility lands (such as ). It would be nice if the tradition continues, and we got some more with Wilds of Eldraine. Perhaps this time around we’ll get an uncommon cycle.

Another thing that could return is the adventure mechanic. It was a very popular mechanic, and it’s easy to bring back where appropriate. Mark Rosewater, the head designer for Magic the Gathering, wrote an article in December 2022, where he stated that the adventure mechanic is a 3 on the storm scale. This means that it’s a mechanic that they’ll likely reuse again, possibly multiple times.

Exploring the wilds would also be the perfect flavor fit for adventure mechanic, so this seems a very likely thing to happen.

Finally, we’re wrapping our predictions with a sad fact. As Mark Rosewater confirmed on his Blogatog, there are no talking animals, so sadly MTG’s take Puss in Boots will be postponed for the time being. (Or at least until we get Shrek Secret Lair.)

Once exact dates for the Wilds of Eldraine release become available, you’ll find them here.

Currently, everything we know for sure is that Wilds of Eldraine releases in fall 2023. Give that the Lord of the Rings MTG set also releases in that period, and probably before Wilds, it’s likely that Wilds is coming out in October 2023, but we’ll have to wait and see to be sure.

So, that’s everything we know about Wilds of Eldraine spoilers so far. Once more info becomes available, we’ll update this article. You can follow us on Facebook or Instagram, so you won’t miss any updates.

In the meantime, you can find other upcoming MTG sets here. Besides, you should also let us know about your predictions for Wilds in the comments below.

Until next time, have fun, and may Wilds of Eldraine contain at least one card that you didn’t even know you wanted to get.