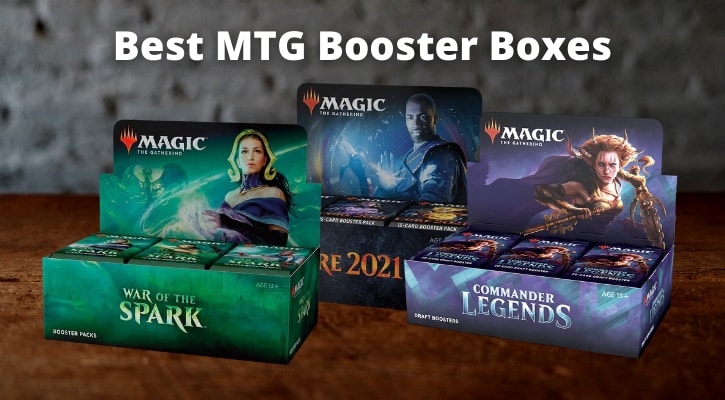 Hello there! So you want to buy some boosters, but don’t know which is the best MTG booster box to buy? We can help you pick the right one for you.

You’ll find different recommendations for different types of players. Alongside each recommended box, we’ll also list some of the most iconic cards from that set.

If you’re in a hurry, here’s a quick highlight of the three great choices, based on different criteria.

On the other hand, if you’ve got time, let’s dive deep and find which MTG booster Boxes are best to buy and why.

If you want the newest booster box, Adventures in the Forgotten Realms is the right set for you. It was released on July 23rd, 2021.

The set is a very special one, since it’s the first time MTG paired with Dungeons and Dragons. There are cards that let you roll 20-sided dice, Class cards and more. The set has a bit lower power level, than some others, but it still contains plenty of fun and powerful cards.

We’d recommend this one for anyone who just wants the newest product, or if you really enjoy D&D. You’ll be pleasantly surprised by various callbacks and references to this popular tabletop RPG.

Number of booster packs: 24 per box

Are you an avid Commander player? If so, look no further – Commander Legends is the best MTG booster box for you.

This set is a combination of Draft and Commander. Each player gets three boosters, and drafts a 60-card deck with a commander. You can find all the details in this Commander Legends Draft Guide.

Even if you don’t want to draft, and just want to open some good Commander cards, this box still provides. Not only does it have a ton of amazing rares and mythic rares, but there are plenty of great cards at lower rarities as well. There’s Three Visits, Cultivate, Arcane Signet, Thought Vessel and plenty more.

There are also a bunch of partner commanders at uncommon slot. This box is truly amazing for any kind of Commander player. You can check its price on Amazon here.

Kaldheim is a Viking-themed plane. Of course, it’s pretty cold on Kaldheim, which marks the return of the Snow mechanic. So there are snow basic lands, and common snow dual lands.

If you want the vanilla Magic experience, Core Sets are usually the way to go. The latest Core Set is Core 2021.

Core Sets don’t have very specific themes, which is great for both beginners and returning players. You’ll find cards that could improve your old decks. That’s especially true because it has some amazing reprints, which you can check in the Iconic Cards section.

You can also get a Collector booster, which features alternate art Ugin and more. You can check M21 Collector Booster contents here.

Zendikar Rising is the return to the world of Zendikar, which many Magic players enjoy very much. Everything in Zendikar is exciting – even something like lands, which matter a lot on Zendikar with mechanics like Landfall.

Zendikar Rising has many goodies. First, it has full art basic lands, which are gorgeous. Each booster contains one, so you’ll get a total of 36 per booster box. Additionally, each box comes with an Expedition – a powerful land with special new artwork.

Besides the regular Draft Booster Box, there are two other options with Zendikar Rising.

Set Boosters are new boosters that can contain up to 4 rares. They are great for players who just want to open their packs and don’t care about drafting. You can order Zendikar Rising Set Booster Box on Amazon.

Finally, you have the option of buying Zendikar Rising Collector Box, which contains some really cool looking cards, plenty of foils and multiple rares and mythics, possibly with an alternate art – like the Lotus Cobra you saw above.

You can check its contents here and price here. It’ll usually contain not one, but two Expedition cards. (at least)

If you’re looking for a great booster box to improve your Standard decks, there’s nothing better than Throne of Eldraine. A ton of Standard staples come from this set, and it’s probably the strongest regular edition we had in a recent memory.

Even after Oko, Thief of Crowns and Once Upon a Time ended up banned in nearly every 60-card format, Eldraine still has an enormous amount of powerful cards left. You’ll get the most bang for your buck with a booster box like this.

Number of booster packs: 12 per display

Fancy a pretty card with an alternate art? Well, Collector Boosters got you covered. In this special boosters you’ll find foil cards, alternate art cards and full-art cards. Check some of the cool art you can expect from these boosters.

If you like weird big creatures with weird creature types, Ikoria: Lair of Behemoths is the right booster box one for you.

Ikoria is the world of big monsters. You have the cycle of Apex creatures, and a bunch of creatures with mutate. If you’re a fan of big creatures, Ikoria will prove to be a great set for you. Of course, you can also get Godzilla cards, but those are only available in Ikoria Collector Boosters.

Ikoria also features one of the most broken mechanics of all time – companion, which completely changed multiple formats from Standard to Legacy, and it had to be nerfed. You usually need just one companion for a specific deck, so you’ll be fine – even if you open just a single copy of a particular companion.

War of the Spark – Planeswalker in Every Booster

Do you love planeswalker cards? Then you should definitely get War of the Spark booster box. This set was the Infinity War of Magic the Gathering, planeswalkers fighting against (or with, or avoiding) Nicol Bolas, Dragon-God.

For that reason there’s a planeswalker in every War of the Spark booster. So yes, if you get a whole box, you’ll get a total of 36 planeswalkers, without counting the possibility of foil ones.

Each one of them has a passive ability. Narset, Parter of Veils for example, has a specially broken one.

Of course, not all of them are on a regular planeswalker power level. But even the uncommon ones are mostly interesting to build around – like Huatli, the Sun’s Heart.

Furthermore, planeswalkers aren’t the only good cards in the set, as you can see in the Iconic Cards section below.

Japanese War of the Spark booster box is a bit different from the English one. Yeah, cards are in a different language, no sh*t they’re different. Seriously, though – every Japanese booster pack has a 50% chance of planeswalker having an alternate anime art.

Wizards got some of the best Japanese artists to work on these cards, including Yoshitaka Amano, who worked on the Final Fantasy franchise. He created a brilliant art for Liliana, Dreadhorde General.

These are just some of the alternate arts, you can find all 36 of them here.

This set was the return to Theros, the world of Greek myths and legends – with Magic’s own twists of course. If you’re a fun of those things, this set will definitely entertain you.

Theros Beyond Death is a nice set to draft. The games are fun and balanced – except when someone opens a broken mythic rare like Kiora Bests the Sea God. There is a strong enchantment theme in the set, alongside some graveyard synergies. You’ll find plenty of powerful cards in this set.

Khans of Tarkir is a true gem for players who love to draft. There are five three-color combinations / clans:

They are all viable to draft, alongside the infamous 5-color deck. Morph creatures give you something to do early on and late in the game. There are plenty of relevant decisions to make both during the draft and also during the matches.

You can expect a lot of powerful cards in the previously mentioned three color combinations. That’s not all, some of the most chased land cards in Magic, the fetch lands are also in the set!

Khans of Tarkir is probably our favorite booster box of all times. You can order one on Amazon.

Number of booster packs: 24 per box

Cant decide which set to pick? Just pick a bit of everything with Mystery Boosters!

This set contains over 1,500 different Magic cards. Some with new frame, some with old frame (yes, the really old one). Cards from all over Magic’s history are in these. You can get some really strong cards in Mystery boosters, even on the uncommon slots.

Sometimes you just want to get lots of powerful cards, right? In that case, Modern Horizons is a great booster box for you. It contains more powerful cards than your average booster.

The set was made especially for Modern, one of the most powerful formats. That’s why you can expect lots of cards that will make your decks better.

Another great thing about Modern Horizons is its big print run. That means that even though it’s a premium set, it’s still available for a reasonable price. And a whole box has 36 boosters in it, unlike some Masters series with only 24.

Modern Horizons has plenty of strong cards for different formats from Modern to Commander, and of course for your kitchen table decks! There are so many good cards, that there’s no way we could list all of them here.

Battlebond is a great set for everyone who likes any kind of multiplayer Magic variants. If you like multiplayer Commander, or casual 60-card multiplayer games, your decks will benefit greatly from a Battlebond booster box.

The set was created with two-headed giant in mind. As such, it’s a great way to spend some quality game nights with your playgroup. For example, if you split a booster box with three friends, you can play a nice 2 vs 2 game with 9 boosters for each team – twice!

One of the worst booster boxes of all time is the Dragon’s Maze one. It’s really not a good set to draft, and it also doesn’t have many good cards. If you want the cheapest booster box, here’s one candidate, especially once you consider that older boxes usually go up in price. This one mostly stayed at the same price point.

However, we’d still recommend that you get one of the regular booster boxes – for more or less the same price you can get Throne of Eldraine, which is both a good set to draft and has tons of strong cards.

Dragon’s Maze is on the list just to warn you – don’t go for the absolute cheapest option, when picking the best MTG booster box.

Alright then, that’s all about booster boxes. You can tell us your favorite in the comments below!

If you don’t want to miss another great Magic article, give us a follow on Facebook or Instagram. You’ll get fresh Magic content, including articles, MTG trivia, spoilers and Magic memes. Join us, we’ll be happy to have you.

Until next time, have fun and may you open just the card you wanted in your booster. The foil version, of course.